Presentation on theme: "Chapter 16: The South and the Slavery Controversy"— Presentation transcript:

1 Chapter 16: The South and the Slavery Controversy

2 The Planter “Aristocracy”
Cotton is King Why were planters drawn to cotton as their main crop? How did cotton cause an economic spiral in relation to slaves and land? How did the North benefit from cotton? How much cotton did America export during this time period? Why did the South consider cotton “king”. The Planter “Aristocracy” Why could the South be considered an oligarchy? How many families owned more than 100 slaves and what impact did these families have on society? Describe planter aristocrats. Why was the planter aristocracy considered undemocratic? Who was Sir Walter Scott and why is he important? How did the plantation system affect the women of the South?

3 Slaves of the Slave System
What were some of the issues with plantation agriculture? How did the economic structure of the south become monopolistic? How did the financial instability of the plantation system impact those who lived in the South? The dependence on cotton led the South to a one-crop economy. Why was this problematic? How did the South feel about the North and why? How did cotton and the plantation economy affect immigration to the South? The White Majority Describe the people who fell directly below the planter aristocrats. How many families owned fewer than 100 slaves? Describe the small slave owners. In Southern society, who fell below the small slave owners and how many people were in this category? Where did the non-slave owning whites live and how did they feel about the planter aristocracy? Who was scorned, even by slaves? Why did non-slave holding whites defend the slave system? Describe the mountain whites and their beliefs. Who did the mountain whites side with during the Civil War?

4 Free Blacks: Slaves Without Masters
How many free blacks were living in the south by 1860 and how did they earn their freedom? Why were free blacks in the South considered a “third race”? How many free blacks lived in the North? Describe life for free blacks in the North. Describe how people in the North and South felt about African Americans. Plantation Slavery How many slaves were present in the South in 1860? Why did the slave population continue to grow? How did planters see their slaves and why were the Irish doing some of the dangerous work? How did slavery hobble economic development of the South? Cotton brought slaves from ________ to _________. How were female slaves seen by their masters? Describe slave auctions.

5 Life Under the Lash The Burdens of Bondage
What did slavery look like “everywhere”? What was the substitute for the ‘wage incentive’ system? Why weren’t slaves flogged all the time? Where was 75% of the slave populations? Describe the family life of slaves and their religious practices. The Burdens of Bondage How was slavery degrading to its victims? How did slaves fight back against the system of slavery? What slave rebellions occurred and were they successful? How did slavery affect whites in the South?

6 Early Abolitionism Radical Abolitionism
What was the American Colonization Society and what was its purpose? Why didn’t colonization appeal to slaves? What prompted the abolition movement of the 1830s? Who were some of the most famous abolitionists? Radical Abolitionism Who was William Lloyd Garrison and why is he important? Who founded the American Anti-Slavery Society? Who was David Walker and what did he write? Who was Sojourner Truth and what did she do ? Who was Martin Delany and what did he believe? Describe Fredrick Douglass. How were Douglass’ beliefs on ending slavery different than Garrison’s?

7 The South Lashes Back How did the Virginia legislature silence abolitionism in the 1830s? What happened after various emancipation proposals were defeated by the Virginia legislature? How did Nat Turner’s rebellion and The Liberator affect Southern slave owners? How did the Nullification Crisis impact southern whites. How did pro-slavery whites defend slavery as a positive good. How did pro-slavery whites compare slave work to the factory work in the North? Why did proslavery arguments widen the gap between the South and the rest of the world? How did slavery impact free speech? How was freedom of the press impacted by the proslavery South?

8 The Abolitionist Impact in the North
Why were many Northerners opposed to abolitionism? What was making the North want to hold onto the Union? Describe the mob outbursts in the North. In the 1850s, how did the North see the South?

Download ppt "Chapter 16: The South and the Slavery Controversy" 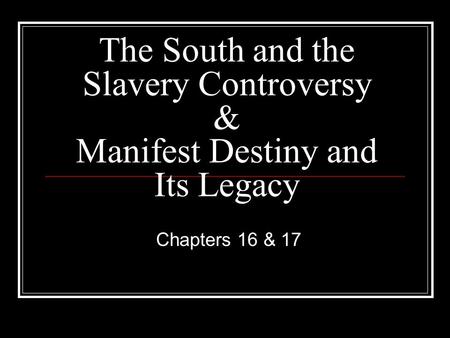 The South and the Slavery Controversy & Manifest Destiny and Its Legacy Chapters 16 & 17. 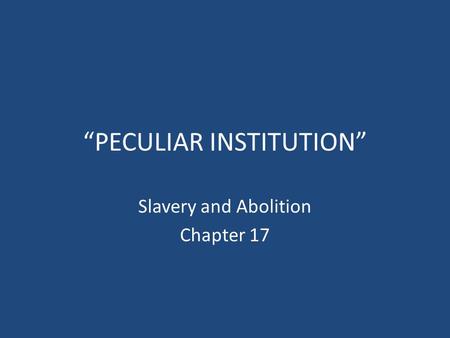 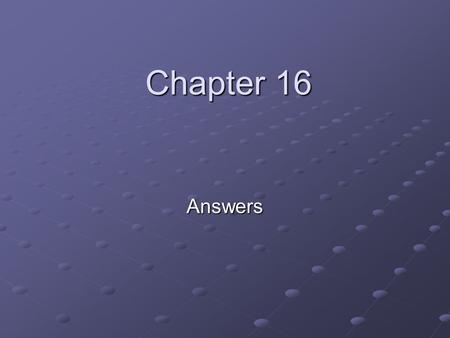 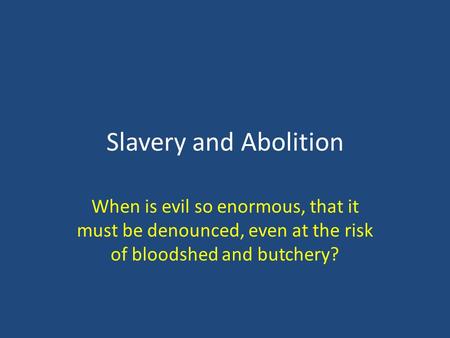 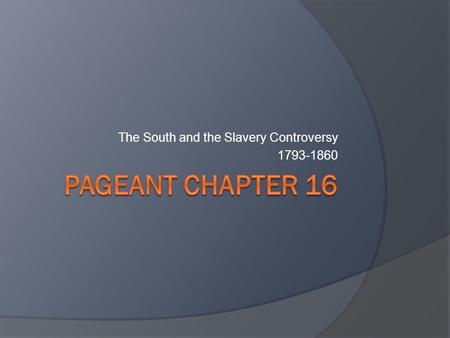 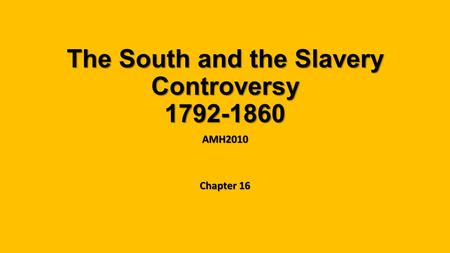 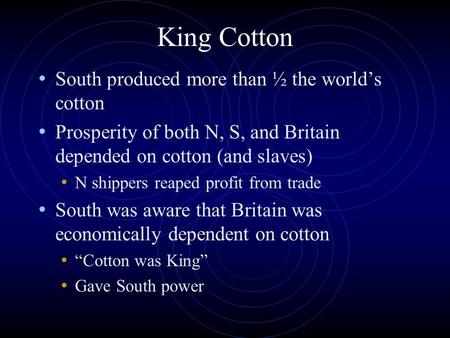 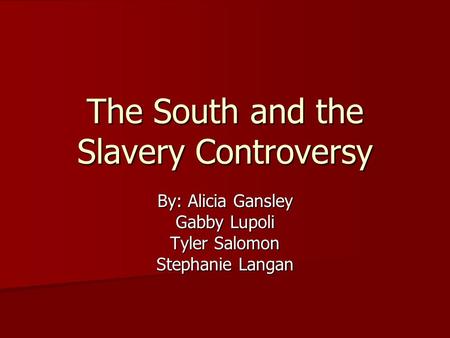 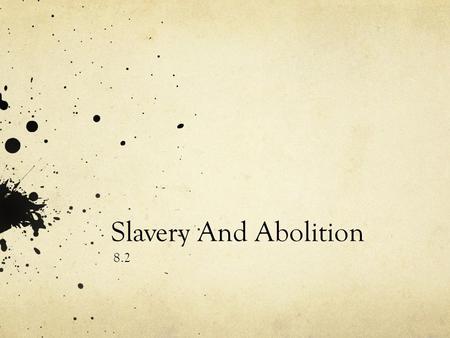 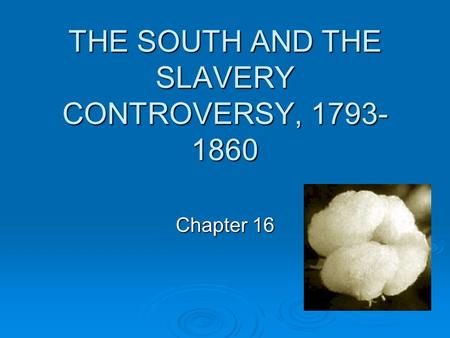