5 Picking the pivot – some inadvisable options
Use first element Acceptable if input is random Very poor if input is presorted or in reverse order Virtually all the elements go into S1 or into S2 This happens consistently throughout recursive calls If input already presorted, will take quadratic time to do nothing at all! Choose larger of first two elements Same problems as above Pick pivot randomly Theoretically a good idea, unlikely that random number would consistently provide a bad partition (unless random number generator flawed – possible!) Random number generation is expensive ADS2 Lecture 19

7 Partitioning strategy
One of several. Known to give good results First step, move pivot to far right by swapping with right element Second step, set i to left element, and j to right-1 identify pivot swap pivot and last element j i We will assume all elements are distinct And consider the case when they are not, later ADS2 Lecture 19

8 Partitioning strategy contd.
Move all small elements to left part of array, and all large elements to right While i is to the left of j, move i right, skipping over elements smaller than pivot Move j left, skipping over elements larger than pivot When i and j have stopped, i is pointing to large element, and j to small If i is to left of j, swap those elements Finally, swap element pointed to by i with the pivot. ADS2 Lecture 19

9 Partitioning example before first swap
i stays the same as 8 is already> pivot j skips along to element 2 Swap those elements and repeat the process j i after first swap: i j before second swap: j i i j after second swap: before third swap: i j STOP: i and j have crossed After swap with pivot: ADS2 Lecture 19 i

10 Partitioning example continued
When finished, evey element in position p<i is small, and every element in position p>i is large Would then apply quicksort to the lists (arrays) 2,1,4,5,0 3 and 8,7,9 Example for you: complete the next stage of the process, i.e. partition the list 2,1,4,5,0,3 ADS2 Lecture 19

12 Small arrays : using a cutoff
For small arrays, quicksort not as fast as insertion sort As quicksort is recursive, these cases will occur frequently Solution: use quicksort until arrays are small, then use insertion sort on whole array Works very well as insertion sort v efficient for nearly sorted arrays Can save about 15% in running time. Good cutoff range is n=10, but any cutoff between 5 and 20 likely to produce similar results Also avoids problems like finding median of three when only two elements left ADS2 Lecture 19

15 QuickSort – Putting it all together
This is an exercise for you (part of Lab 5) Need to include following methods: swap medianOfThree insertionSort qSort You will be sorting an array of country names. quickSort will need to be generic Will also need to convert mergeSort to be generic, and compare timings for quickSort, mergeSort, insertionSort, and bubbleSort. ADS2 Lecture 19

16 Analysis of Quicksort As for mergesort, T(0)=T(1)=1
Running time for array of size n is equal to running time of two recursive calls plus the linear time spent in the partition (pivot selection takes only constant time) Basic quicksort relation is T(n) = T(i) +T(n-i-1) +cn where i=|S1| = number of elements in S1 Worst case: O(n2) Best-Case: O(n log n) Average-case: O(n log n) will prove the first two of these on the board ADS2 Lecture 19

17 Finally: Comparison of quicksort and mergesort
Both routines recursively solve two subproblems and require linear additional work, but Unlike mergesort, in quicksort subproblems not guaranteed to be of equal size However, quicksort is faster because partitioning step can be performed “in place”, very efficiently. More than makes up for (2). ADS2 Lecture 19 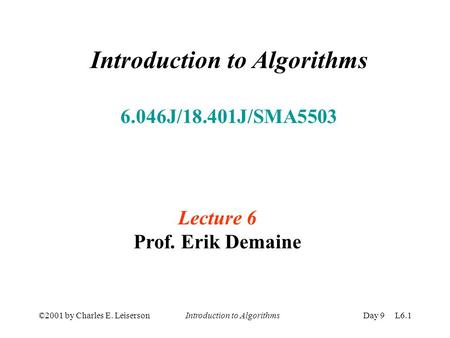 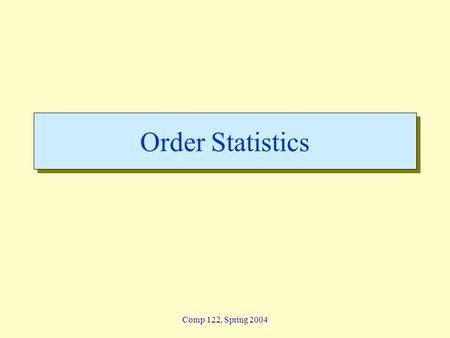 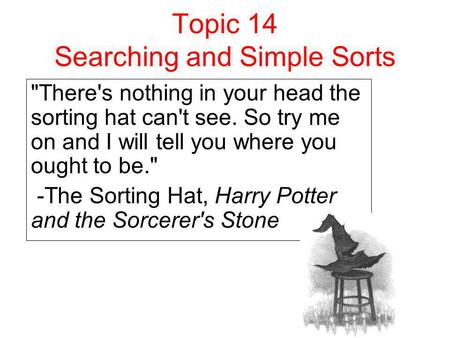 Topic 14 Searching and Simple Sorts "There's nothing in your head the sorting hat can't see. So try me on and I will tell you where you ought to be." -The. 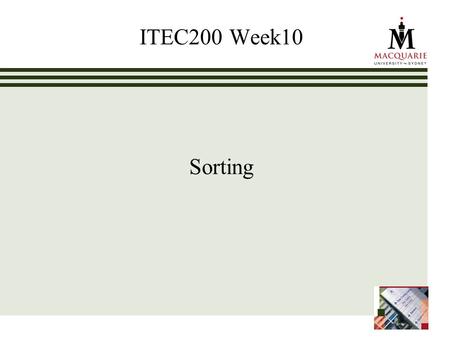 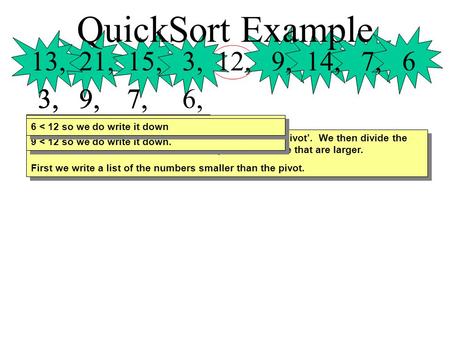 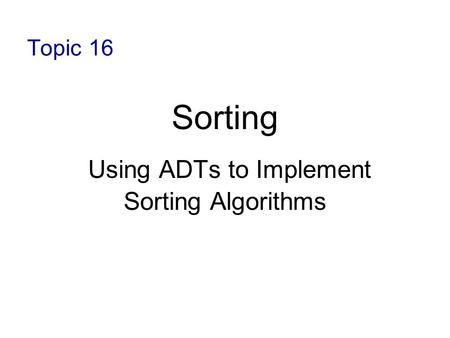 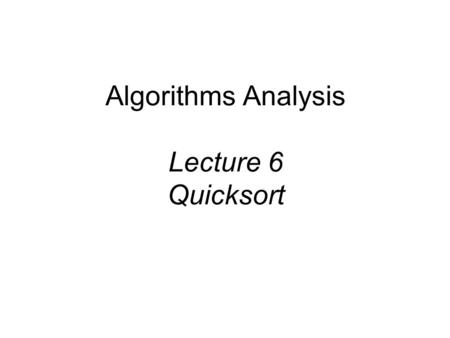 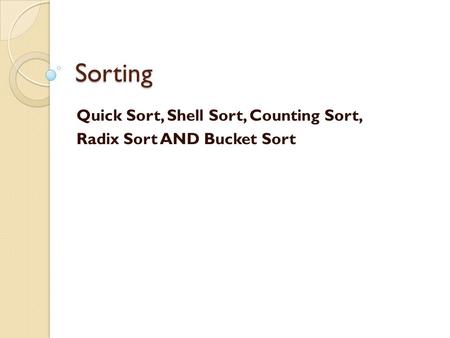 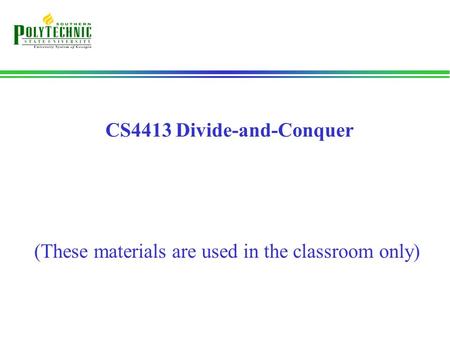 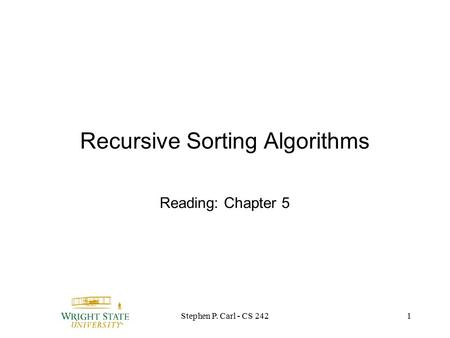 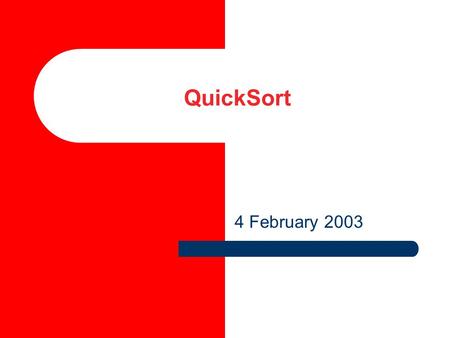 QuickSort 4 February QuickSort(S) Fast divide and conquer algorithm first discovered by C. A. R. Hoare in If the number of elements in. 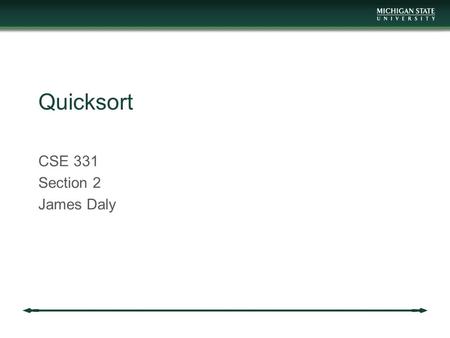 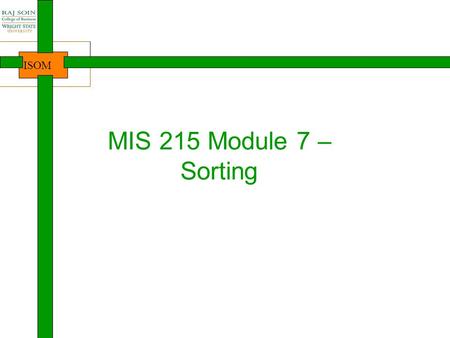 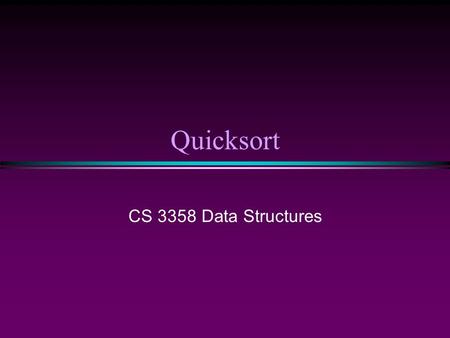 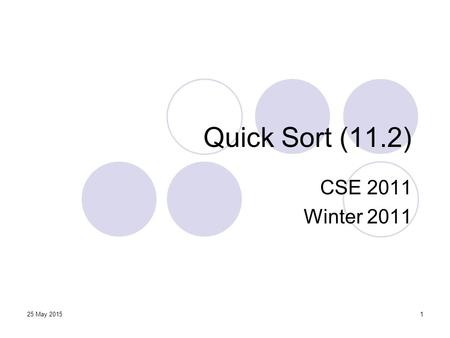 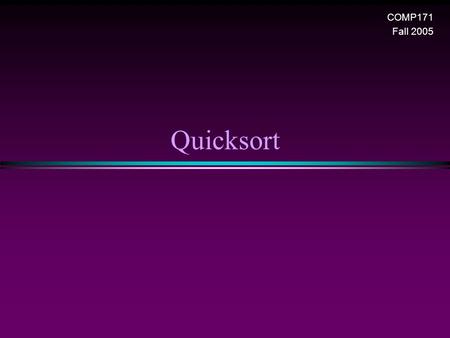 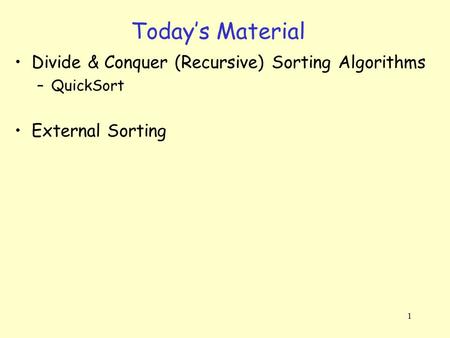 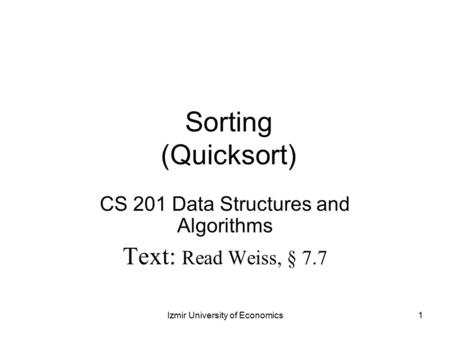 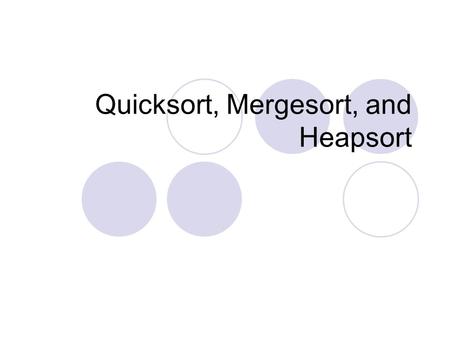 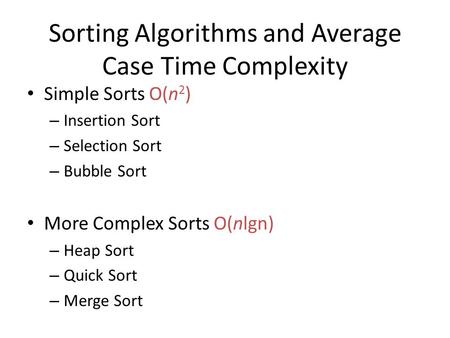