4 What Happened? + Sodium transferred one valence electron to chlorine.
[Na]+ + [Cl]- + energy + This is the electron-dot structures

5 Types of Ionic Compounds
Electrostatic force holds the charged atoms together is the ionic bond. Metal and non-metal ionic bond are called oxides. Most other ionic compounds are called salts.

7 p. 210 b Ribbon of magnesium metal burns in air, it forms the ionic compound magnesium oxide. Magnesium is a metal Oxygen is a non-metal Notice the name, oxygen became oxide. Is this a binary ionic compound?

9 Properties of Ionic Compounds
Physical structure Ratio of positive and negative ions Ions are packed into repeating pattern * No single unit of Na and Cl exists, there are many Na+ and Cl- ions in a 1 to 1 ratio.

10 Question What determines the ratio?

13 Examples Minerals More than 1/3 of all known minerals are silicates
Halides Borates Carbonates What elements do you think are in these?

16 Lattice Energy Energy required to separate 1 mol of the ions in an ionic compound The greater the lattice energy, the stronger the force of attraction ( harder to separate)

18 Ionic compounds are electrolytes; they conduct an electric current in the liquid phase and in aqueous solution. Lattice energy is the energy needed to remove 1 mol of ions from its lattice.

20 Explain how ions form bonds, and describe the structure of the resulting compound.
Relate lattice energy to bond strength. Use electron configurations, orbital notations and electron dot structures to represent the formation of an ionic compound from the mental strontium and the non-metal chlorine.

22 Each Student List a metal and a non-metal
Exchange papers and determine the ionic compound formed between them.

23 Exit Ticket Determine the ionic compound formed from Mg and Cl and explain how it was formed. Include its ratio 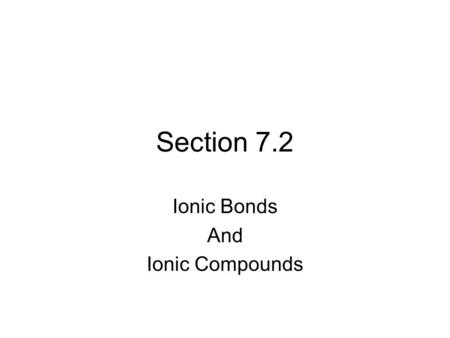 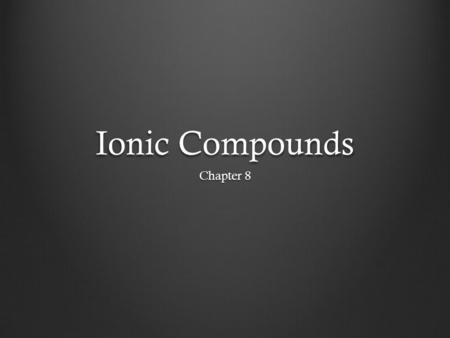