2 Objectives What were the results of Alexander the Great’s conquest of India? How did Asoka help to spread Buddhism? Who were the Guptas and how did they contribute to Indian Culture?

3 I. Veldic Age 1500bc- 1000bc India many small kingdoms People followed many different religious beliefs Little unity 326 bc Alexander the Great invaded India He won, but died 3 years later, and most of his troops left India.

4 Even though his empire only lasted a few years, it had lasting results Brought early contacts between European and Indian cultures Greek culture met Buddhist culture and Buddhist art, painting, and sculpture flourished. Alexander proved to Indian leaders that without unity they would be subject to many invasions.

5 II. Maurya Were the First Indian Emperors Chandragupta Maurya – Indian noble who sought to unify northern India Conquered kingdoms from the Indus to the Ganges rivers and united them to a strong nation. Greeks who visited agreed that they were as rich and prosperous as their own cities

6 Government was a monarchy – rule of single person His rule began the Mauryan dynasty- first Indian Emperor to rule in India. Great soldier His grandson, Asoka, won fame as well but for peace Turned against war and violence and converted to Buddhism This dynasty laster for 137 years. – ended in 184 BC

7 III. Hindu Society Reached its Height Under the Guptas There was little peace for the next 500 years after Mauryan Dynasty Kushans – Kushan Dynasty – traded along the Silk road in China Guptas 320 AD – ruled for nearly 200 years. Ruled much of Northern India between the Indus and the Ganges Rivers.

8 Gupta period was known as India’s Golden Age Hinduism gradually absorbed Buddhism and once again became the leading religion of India. Science, Math, and Astronomy flourished Creative time for art, architecture, painting, sculpture, poetry, drama, and fables In the 400’s the Huns – a tribe from Asia- began to raid and terrify India and Europe.

9 By 600 they brought about the fall of the Gupta Empire Some of the Huns became wealthy warrior princes Became known as Rajputs – Close knit warrior class For the next 600 years Indian princes and invaders fought for control of N. India. War kept country divided Lasted till Muslim invasion of 1008 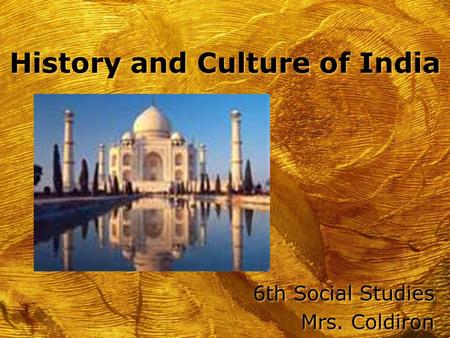 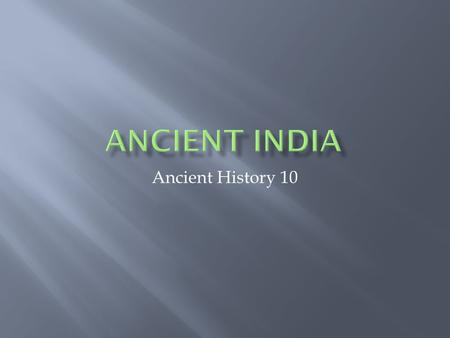