Presentation on theme: "Economic Policymaking Chapter 17. Government and the Economy Introduction – Capitalism: An economic system in which individuals and corporations, not."— Presentation transcript:

3 Government and the Economy “It’s the Economy, Stupid”: Voters, Politicians, and Economic Policy – Economic trends affect who the voters vote for – Economic conditions are the best predictor of voters’ evaluation of the president – Republicans worry about inflation – Democrats stress importance of unemployment

4 Government and the Economy Two Major Worries: Unemployment and Inflation – Unemployment rate: Measured by the BLS, the proportion of the labor force actively seeking work, but unable to find jobs. – Inflation: The rise in prices for consumer goods. – Consumer Price Index: The key measure of inflation that relates the rise in prices over time.

7 Instruments for Controlling the Economy Monetary Policy and “the Fed” – The manipulation of the supply of money in private hands – too much cash and credit produces inflation. – Money supply affects the rate of interest paid. – Main policymaker is the Board of Governors of the Federal Reserve System – the “Fed.”

8 Instruments for Controlling the Economy Monetary Policy and “the Fed” continued… – The Feds instruments to influence the supply of money in circulation: Sets discount rates Sets reserve requirements Buys and sells government bonds – Through the use of these actions, the Fed can affect the economy.

9 Instruments for Controlling the Economy Fiscal policy: Keynesian Versus Supply- Side Economics – Fiscal Policy: The policy that describes the impact of the federal budget on the economy. – Keynesian Economic Theory: Government spending and deficits help the economy weather its normal ups and downs. – Government’s job to increase demand of goods

10 Instruments for Controlling the Economy Fiscal policy: Keynesian Versus Supply- Side Economics, continued… – Supply-Side policy: The policy that says there is too much taxation and not enough money to purchase goods and services. – Reduce taxation and government regulation then people will work harder, and thus create a greater supply of goods.

11 Obstacles to Controlling the Economy Some think politicians manipulate the economy to win reelection. But there are problems with that… – But things like the budget are prepared in advance of when they go into effect. – Some benefits are indexed. – Capitalism can also affect the economy. Government is more important in setting the rules of the game.

12 Arenas of Economic Policymaking Business and Public Policy: Regulations and Subsidies – Corruption and Concentration Increased incidence of bankruptcy and scandals. Concentration into multinational corporations Government must find ways to control the excess power in this new economy.

Download ppt "Economic Policymaking Chapter 17. Government and the Economy Introduction – Capitalism: An economic system in which individuals and corporations, not." 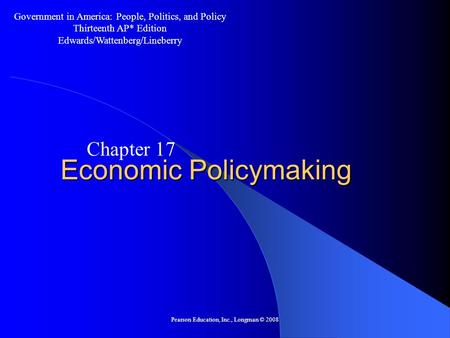 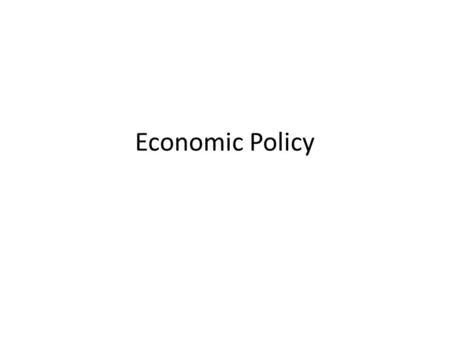 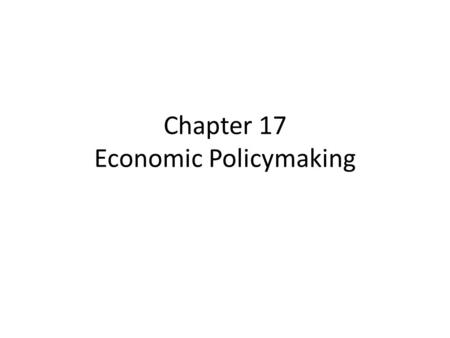 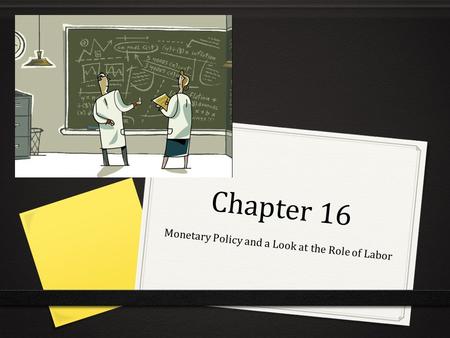 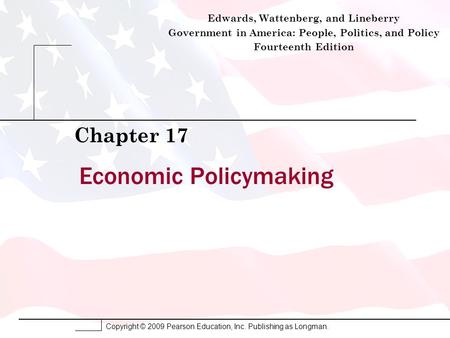 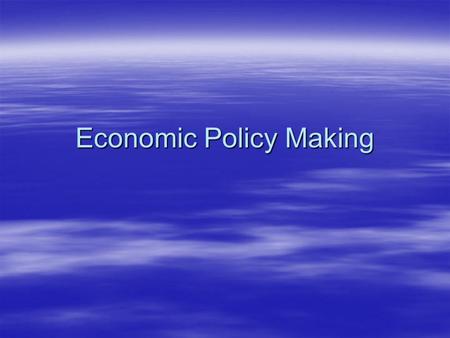 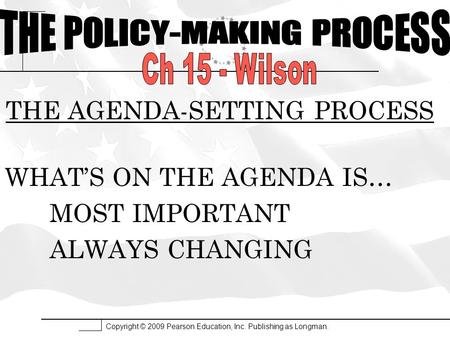 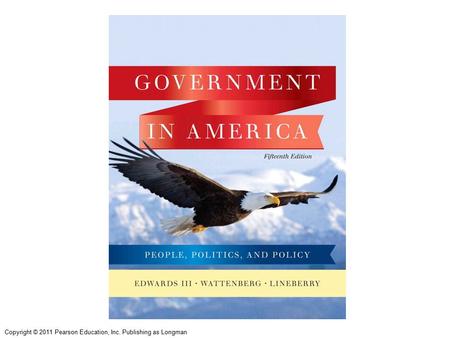 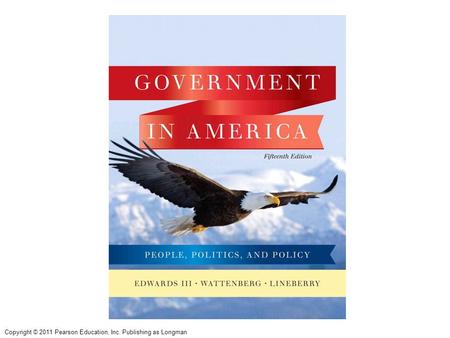 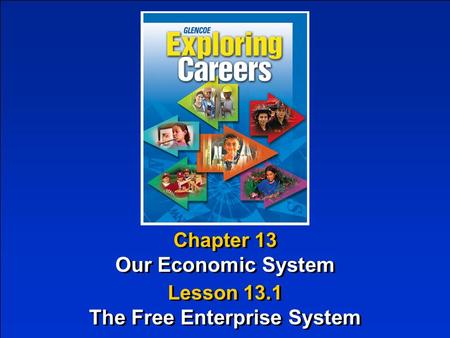 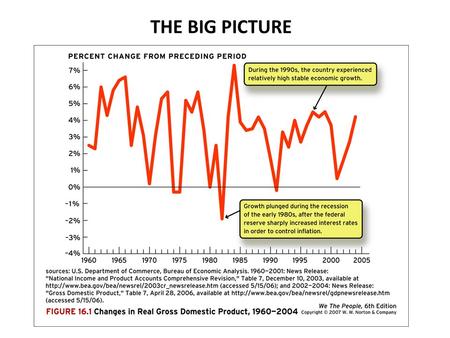 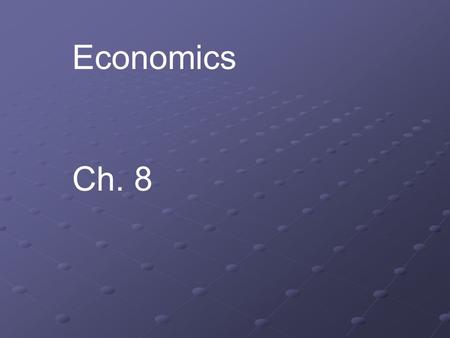 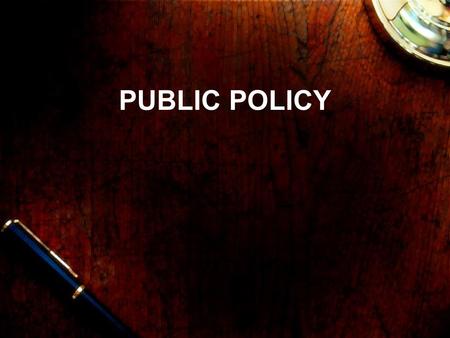 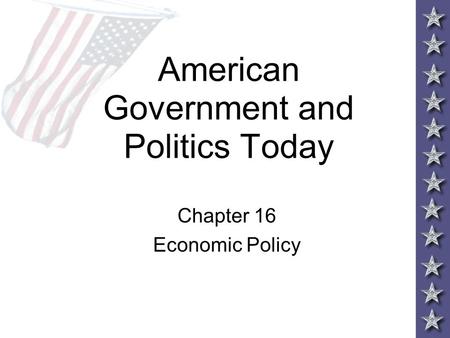