3  Metals tend to have 1, 2 or 3 electrons in their outer orbit and tend to lose these electrons when they combine with other elements to form positive ions.

4  Nonmetals tend to have 5, 6 or 7 electrons in their outer orbit. They all tend to gain electrons when they combine with metals to form compounds.

5  As mentioned in a previous class sodium (Na) and chlorine (Cl) are highly reactive with each other and combine to produce a fairly stable compound called NaCl (salt).

6  This compound is called an ionic compound because it made from positive and negative ions that transfer electrons from a metal to a non-metal.

7  Positive and negative ions are attracted to each other due to their opposite charges.

8  Sometimes in order to fill the valence shell some atoms have to combine with multiple atoms to become stable.

9  A chemical formula is a way of expressing information about the atoms that make up a particular chemical compound.  The formula identifies each type of element by its chemical symbol and identifies the number of atoms of such element to be found in each molecule of that compound.  Ex. Methane is CH 4

11  Ionic Compounds dissolve in water and form solutions that conduct electricity because they are made up of charged ions.  These ions separate from one another and are free to move around and carry an electrical current.

12  Molecular Compounds are formed when nonmetals combine with other nonmetals.

14  EXAMPLE 1- What is the formula for the ionic compound formed by calcium and fluorine?  Step 1  Step 1 – Write the symbols of the elements with the metal first and non-metal second  Ca F  Step 2  Step 2 – Write the ion charge of each element  Ca +2 F -1

18  When naming an ionic compound we simply write the name of the metal first and non- metal second. We change the ending of the non-metal name so that it ends in “ide.” 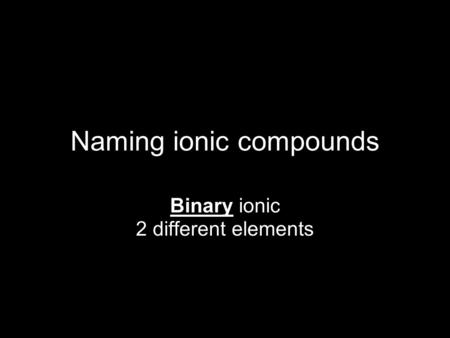 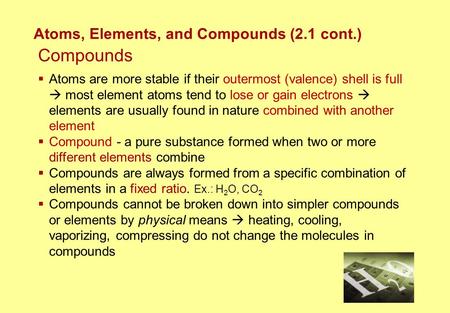