8 Behavioristic Position
Individuals are born without built-in mental content and their knowledge comes from experience and perception(tabula rasa). Assumes a learner is essentially passive, responding to environmental stimuli. Behavior is shaped through positive reinforcement or negative reinforcement. Consider effective language behavior to be the production of correct responses to stimuli. If a particular response is reinforced, it then becomes habitual, or conditioned.

9 Behavioristic Position
Behaviorist Learning Theory is a process of forming habits; the teacher controls the learning environment and learners are empty vessels into which the teacher pours knowledge.

10 Nativist  We have an innate predisposition to learn language, and learning is in our genetics. According to Chomsky, this innate knowledge is embodied in a ¨little black box¨ of sorts, a language acquisition device (LAD). All human beings are genetically equipped with the ability that enables them to acquire language. (a system of universal linguistic rules or Universal Grammar)

12 Nativist The child´s language at any stage is systematic in that the child is constantly forming hypotheses con the basis of the input received and then testing those hypothesis in speech and comprehension. The early grammars of child language were referred to as pivot grammar. The parallel Distributed Processing: a child´s linguistic performance may be the consequence of many levels of simultaneous neural interconnections rather that a serial process of one rule being applied, then another, then another and so forth.

13 Functional Approaches
Two emphases emerged Researchers began to realize that language was a cognitive and affective ability to communicate with all the things including the self. They dealt with the forms of language, not the deeper functional levels.

15 Functional Approaches
Social Interaction and Language Development Social constructivist emphasized on the function of language in discourse. Discourse has a special meaning in that language is used for interactive communication.

16 Functional Approaches
The functional context approach to learning stresses the importance of making learning relevant to the experience of learners and their work context. The learning of new information is facilitated by making it possible for the learner to relate it to knowledge already possessed and transform old knowledge into new knowledge. By using materials that the learner will use after training, transfer of learning from the classroom to the "real world" will be enhanced.

17 What issues in First Language Acquisition were covered in this chapter?

18 Issues in First Language Acquisition
Competence and Performance Competence: Refers to one´s underlying knowledge of a system, event, or fact. It is the nonobservable ability to do something, to perform something. Competence & Language: it is one´s knowldege of the system of a language (rules of grammar, vocabulary)-all the pieces of language and how they fit together.

19 Competence and Performance
It is the overtly observable and concrete manifestation or realization of competence. It is the actual production (speaking, writing) or the comprehension (listening, reading) of linguistic events.

20 Issues in First Language Acquisition
Comprehension and Production They are both aspects of competence and performance. Children seem to understand more than they actually produce like adults do.

21 Issues in First Language Acquisition
Is language acquisition nature or nurture? Even if Nativists insist that a child is born with an innate knowledge toward language, there are a number of problems. The innateness is important, but we should not ignore the environmental factors. Language is both acquired and learned

22 Issues in First Language Acquisition
UNIVERSALS Children go through similar Universal Language Acquisition stages regardless of cultural and social circumstances. Language is universally acquired in the same manner, and the deep structure of language at its deepest level may be common to all languages. According to Maratsos (1988), universal linguistic categories such as word order, morphological marking tone, agreement, reduced reference of nouns and noun clauses, verbs and verb classes, predication, negation and question formation are common to all languages. There are principles and parameters which specify some limited possibilities of variation. Parameters determines ways in which languages can vary.

23 Issues in First Language Acquisition
Systematicity and Variability Systematicity means that children show a remarkable ability to infer the phonological, structural, lexical and semantic system of language. However, in the midst of all this systematicity, there is an equal amount of variability in the process of learning. This means that something children once learned may easily be changed or forgotten due to the perception of new language systems.

25 Issues in First Language Acquisition
Imitation One of the most important strategies a child uses in language learning is imitation. Behaviorists assume one type of imitation, but a deeper level of imitation is much more important in the process of language acquisition. When children imitate the surface structure of the language, they are not able to understand what they are imitating.

26 Issues in First Language Acquisition
Practice A behavioristic model of first language acquisition would claim that practice - repetition and association – is the key to the formation of habits by operant conditioning. Practice is usually regarded as referring to speaking only. But we can also think about comprehension practice. The child learns not only how to initiate a conversation but how to respond to another’s initiating utterance and recognize the function of the discourse.

27 Issues in First Language Acquisition
Input The role of input in the child’s acquisition of language is very important. Children can speak what they hear. Adult and peer input to the child is far more crucial that nativists earlier thought. Adult input shapes the child’s acquisition and the interaction patterns between child and parent change according to the increasing language skill of the child.

28 Issues in First Language Acquisition
Discourse Berko-Gleason mentioned that interaction, rather than exposure, is required in order for successful first language acquisition to take place and children learn language in the context of being spoken to. Sinclair and Coulthard proposed that conversations should be examined in terms of initiations and responses.

29 In Conclusion In order to understand why it’s not easy to learn a second language in spite of the first language acquisition, we should understand the nature of initial acquisition process. 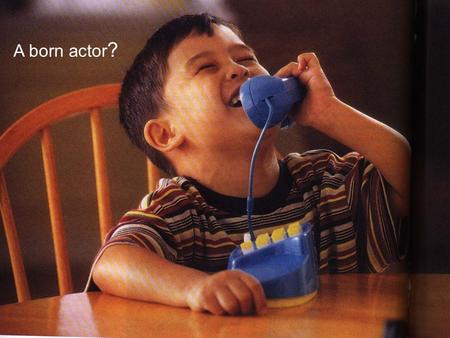