Presentation on theme: "ICAO was created in 1944 to promote the safe and orderly development of civil aviation in the world. A specialized agency of the United Nations, it sets."— Presentation transcript:

2 ICAO was created in 1944 to promote the safe and orderly development of civil aviation in the world. A specialized agency of the United Nations, it sets international standards and regulations necessary for the safety, security, efficiency and regularity of air transport and serves as the medium for cooperation in all fields of civil aviation among its 187 Contracting States.

3 Presentation by Robert Witzen, Secretary of the
Aeronautical Communications Panel, to the Radio Frequency Seminar ICAO Regional Office for the AFI Region in Nairobi, Kenya from 17 – 19 February on Recommendation 415 of the ITU World Radiocommunication Conference 2009 (Geneva, Switzerland) from 9 June to 4 July 2003

4 RESOLUTION 415 – Study of current satellite frequency allocations that will support the modernization of civil aviation telecommunication systems considering a) that some developing countries still lack an appropriate communication infrastructure that meets the evolving requirements of modern civil aviation; b) that the cost of providing and maintaining such an infrastructure, in particular a terrestrial infrastructure, is increasingly expensive, particularly in remote regions; c) that satellite communication systems provide a real possibility to meet the demands of the International Civil Aviation Organization (ICAO) communication, navigation, surveillance and air traffic management (CNS/ATM), especially in the areas where a terrestrial communication infrastructure is not available It was reported to the ITU WRC-2003 that in developing countries, still a communication infrastructure that meets the requirements of international civil aviation is lacking, in particular in the remote areas of the AFI Region. Providing and maintaining such an infrastructure, that would comply with the ICAO requirements in Annex 10, is becoming increasingly expensive and is not practicable in these areas. One of the reasons being that terrestrial systems have a limited designated operational coverage (service range), with as an exception the use of HF frequencies. The availability of HF voice communications however has limitations (although these have mainly overcome by the introduction of HF datalink). Significant improvements to the aeronautical communications is expected by a wider use of satellite technology.

5 RESOLUTION 415 – Study of current satellite frequency allocations that will support the modernization of civil aviation telecommunication systems further considering a) that allocations to aeronautical services and for applications exist over a broad range of frequency bands; b) that technologies now exist where different services can be accommodated by efficient use of a single spacecraft or satellite network; c) that the benefits of establishing and utilizing satellite communication systems for civil aviation would also bring additional benefits for developing and sparsely populated countries by enabling the development of telecommunication systems in conjunction with the civil aviation systems, Frequency bands or allocations for air-ground communications only exist in three frequency ranges: HF bands ( MHz) VHF band ( MHz) 1540/1640 MHz band. Although the allocation in these band is generic (Mobile Satellite Service, aeronautical services have been afforded some sort of priority in the sub-bands MHz and MHz. However, the actual available spectrum for aviation in this band is not available in the public domain which makes it difficult to make use of this spectrum.. No other bands are available for air-ground communications on either an (exclusive) or shared basis, suitable to meet the requirements of modern CSN/ATM systems. The resolution is pointing at using satellite systems that are capable of providing aeronautical and non-aeronautical communications, in particular in sparsely populated areas..

6 RESOLUTION 415 – Study of current satellite frequency allocations that will support the modernization of civil aviation telecommunication systems noting 1 that Recommendation 34 (WRC‑95) states that future world radiocommunication conferences, whenever possible, should allocate frequency bands to the most broadly defined services with a view to providing maximum flexibility in spectrum use; 2 that Resolution 20 (Rev.WRC‑2000) resolves to instruct the Secretary-General “to encourage ICAO to continue its assistance to developing countries which are endeavouring to improve their aeronautical telecommunications”; 3 that there is a need to provide long-term spectrum availability for aeronautical satellite communications for safety purposes, Recommendation is trying to convince administration to allocate frequency bands to the most broadly defined radio services. Although this may provide flexibility for the use of this band, this is a situation that is not desired when aviation use comes into view. Aviation requires frequency allocations on a primary basis, in non-shared (exclusive) bands and on a global basis. This serves three purposes: A primary allocation has priority over any other (non-primary) use of the band An exclusively allocated band provides the necessary capacity for communications Global allocations allow for the use of aeronautical systems on a global basis Another requirement for aviation is use of global systems in aircraft. This improves the safety and the efficiency of flight. Stabdards for these global systems are developed in ICAO Resolution 20 is seeking the collaboration of ICAO and UNCTAD with the ITU to assist developing countries in improving their aeronautical telecommunications. Of critical concern is the ability of the support that can be given by the UNDP and other sources of financial support to provide the resources for the improvement of aeronautical telecommunications.

7 RESOLUTION 415 – Study of current satellite frequency allocations that will support the modernization of civil aviation telecommunication systems n resolves to invite WRC-07 1 to examine the possibility of broadening the services and applications of the use of current satellite frequency allocations in order to allow the expansion of ICAO CNS/ATM systems that can also support other non‑aeronautical telecommunication services; 2 to take appropriate actions, based on the results of the examination specified under resolves 1, The Resolution requires the WRC-07 to examine the possibility of broadening the services and applications of current satellite frequency allocations. On of the prime considerations for this decision is to enable hybrid systems (e.g. systems that can provide both aeronautical – and land mobile satellite communications, but possibly as well fixed link satellite radiocommunications. In principle, this approach would be acceptable, assuming that there is enough spectrum available for accommodating these services and systems. However, since the frequency spectrum is scarce, in such a hybrid system the availability of spectrum for aeronautical applications is not guaranteed other than at the level of the system providers. In addition, the lack of ICAO standards is a matter that needs to be addressed in conjunction with plans to use these systems in aviation. Those standards should have global applications, i.e. need from ICAO’s perspective a global allocation. At this moment, the INMARSAT system is providing aeronautical communications, in accordance with established ICAO Standards. In the ASIA/ PACIFIC Region, soon the MTSAT system is expected to be put into operation soon. These systems are SARPs compliant and the INMARSAT system can easily be implemented in the AFI Region to improved air-ground communications and to provide African wide coverage. Other satellite systems, using either a geo-stationary or non-geostationary orbit, are being considered in ICAO (ACP Working Group C) and such systems would need to be considered in the light of Resolution 415. These systems are operating or expected to operate under an appropriate radio-regulatory regime (exclusive allocation or, when shared with other services, with appropriate priory real-time access for aeronautical communications). A primary allocation and the inclusion of proper footnotes in the Radio Regulations is seen as a minimum requirement.

9 RESOLUTION 415 – Study of current satellite frequency allocations that will support the modernization of civil aviation telecommunication systems further invites 1 BDT to also examine this issue and provide assistance, as appropriate, that would facilitate developing countries to participate in the work of ITU-R on this matter; 2 ICAO, the International Air Transport Association (IATA), administrations and other organizations concerned to participate in the studies identified in invites ITU‑R above, requests the Secretary‑General to bring this Resolution to the attention of ICAO.

Download ppt "ICAO was created in 1944 to promote the safe and orderly development of civil aviation in the world. A specialized agency of the United Nations, it sets." 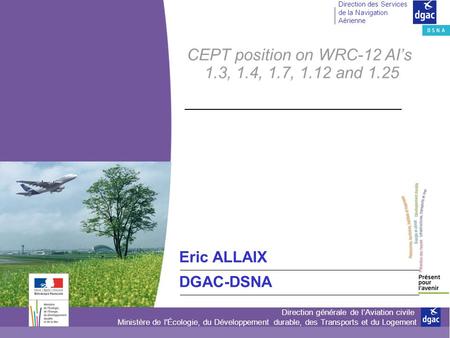 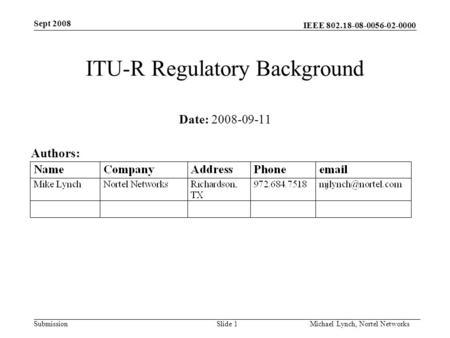 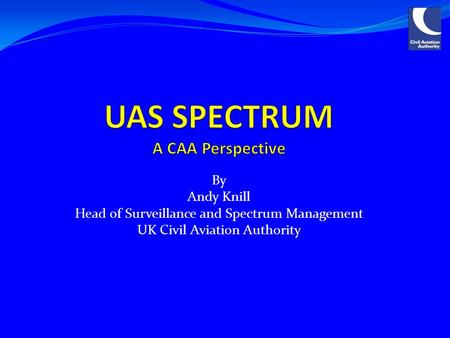 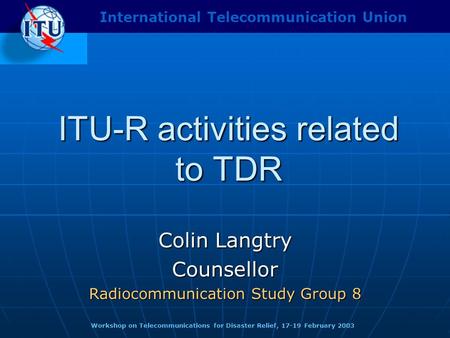 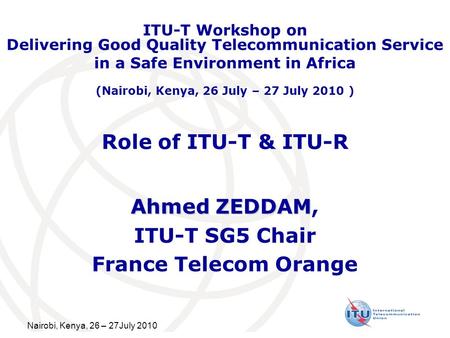 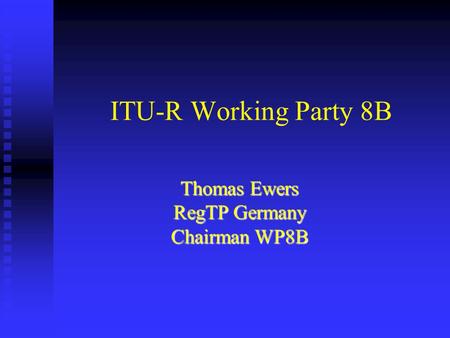 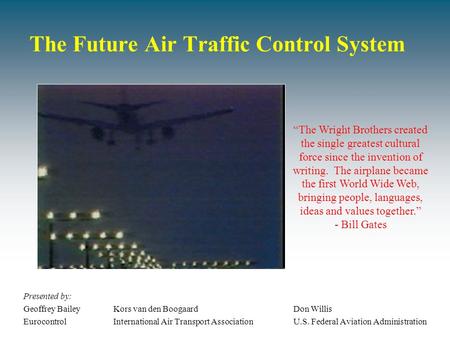 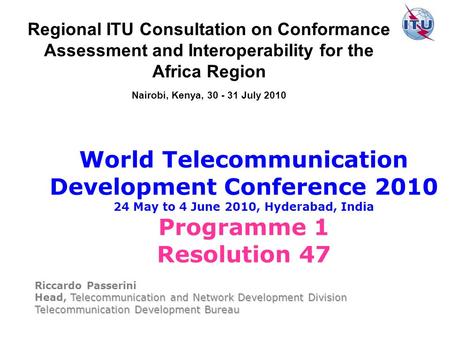 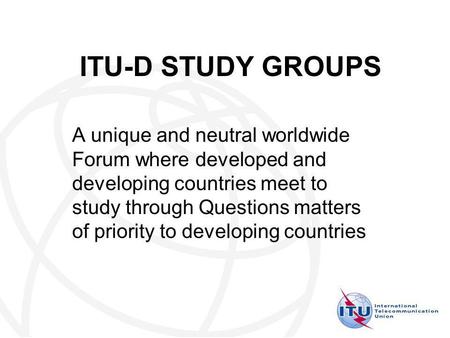 ITU-D STUDY GROUPS A unique and neutral worldwide Forum where developed and developing countries meet to study through Questions matters of priority to. 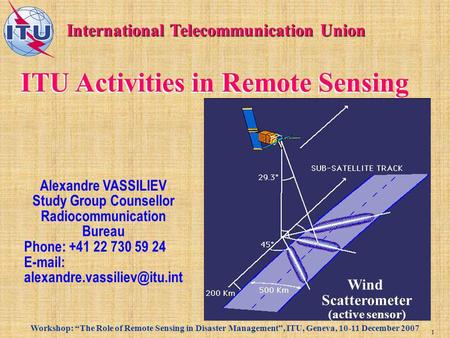 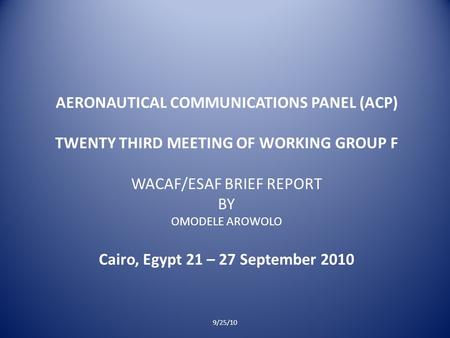 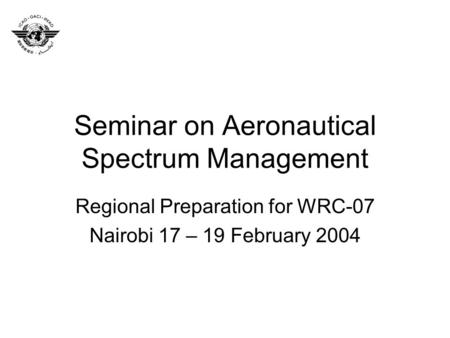 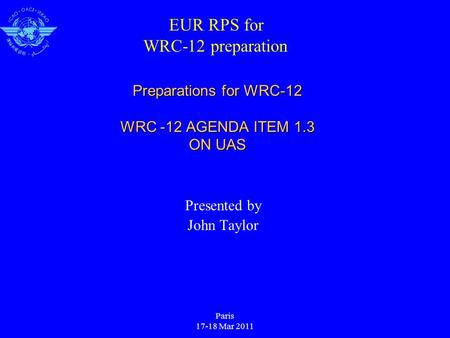 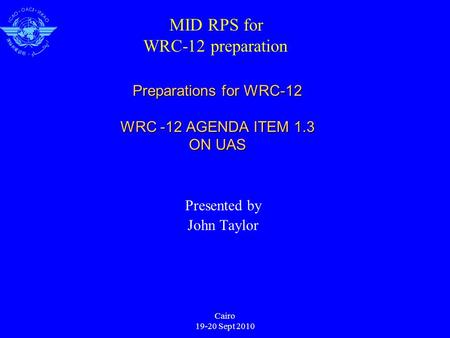 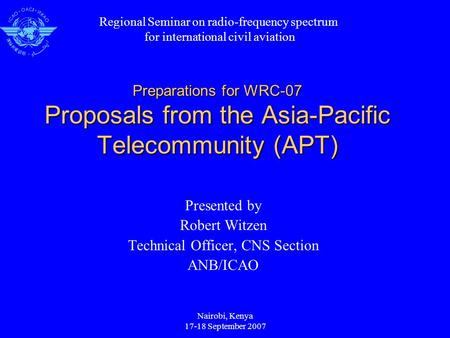 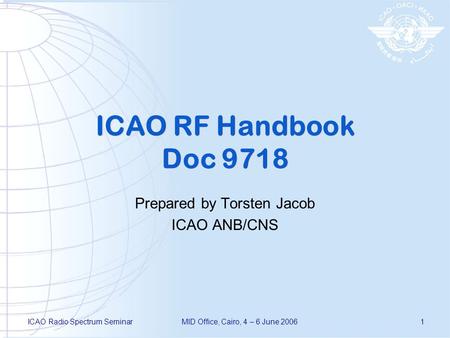 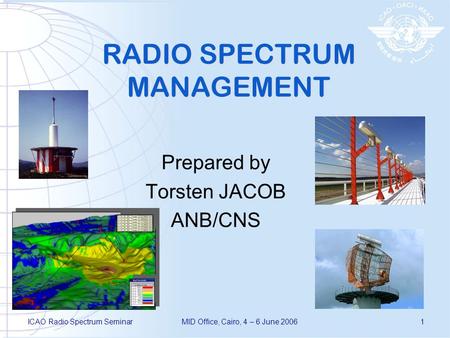 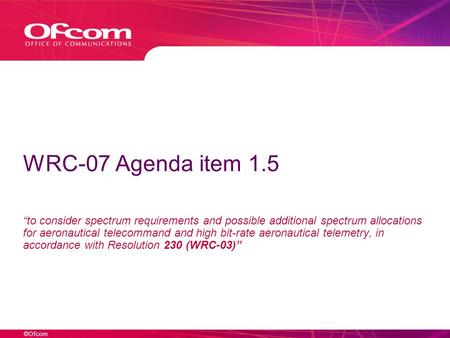 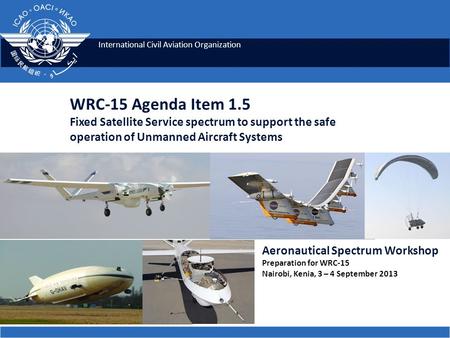 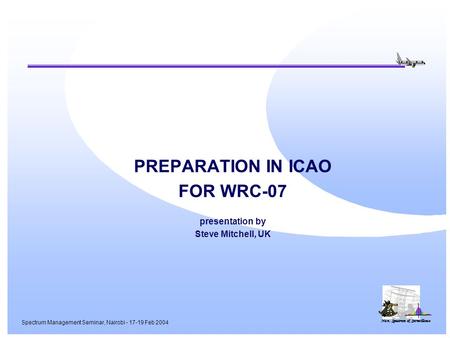