2 Zones within a Modern City
In cities today, separate districts are used for different purposes and activities and include; Commercial Transport Residential Industrial recreational

3 Commercial Land Use Commercial districts in a city contain;
Banks, department stores, cinemas, restaurants, theatres and offices. The CBD is the largest commercial district in cities. CBD is found in the most accessible part of the city where transport networks meet. Space is limited and rents are high. Office buildings are multi-storey and car park charges are high.

4 Transport Land Use Road, car parks, bus depots, train stations and railways take up a lot of space in cities. European cities have grown out from a medieval core. Therefore city centre streets are often narrow. Many modern cities are surrounded by ring roads

5 Residential Land Use This is usually the largest single land use in cities today. Housing densities vary within a city. High density is found close to the city centre because of the cost of land – multi storey apartments. Residential suburbs have more space with front and back gardens. Large shopping centres are located at the edge of the city for suburban residents because these centres are accessible by car on ring roads.

6 Where do shopping centres locate and why?

7 Industrial Land Use In the 19th century factories were built close to canals and railway stations – (why?) They were also close to residential areas because people walked to work. Today heavy industries such as oil refining, cement plants and steelworks are found in port areas of cities. Manufacturing is being located at the edges of cities where large and cheaper sites are available and ring roads allow access for trucks

8 Recreational Land Use Recreational areas are essential for health of urban residents. Phoenix Park is the largest city park in Europe. Families can visit these parks. They are also used for running, cycling etc.

9 Recreational Land Use – Name the park

10 Zoning Local authorities devise long term plans for the development of modern cities. This involves zoning land for specific economic and social activities. Zoning land means the city will develop according to a specific plan. It is designed so that residential areas are located close to recreational parks, industries with heavy goods are located together etc.

13 Burgess’s concentric zone theory 1925
Burgess’s theory highlights the relationship between income and distance from the CBD. Theory claims that cities are composed of concentric zones that grow outwards from the centre. There is competition between groups of people for land and space. This leads to people with the same income living in the same district. Burgess really only attempted to explain Chicago.

15 Burgess’s concentric zone theory 1925
Is Burgess’s theory relevant to cities today? Some aspects still apply. For example, in cities in the developed world, poor migrants live close to the city centres. This occurs in Paris, Brussels and a number of British cities. Some of Dublin’s recent migrants live close to the city centre. In Dublin, middle class communities live further away from the city centre than working class communities. Very few cities have concentric circles of people of the same income. Local authorities have rehoused some inner-city residents in working class areas outside the city centre.

17 Homer Hoyt’s sector theory 1939
Hoyt also used Chicago as a model like Burgess but he broadened his research and included other cities. For Hoyt, transport routes were important in the development of urban land use. He believed that cities grew outwards in wedge shaped patterns, called sectors along transport routes.

19 Homer Hoyt Sector Theory 1939
Zones Zone 1 – CBD: CBD Zone 2 – the whole sale & light manufacturing sector: Located along routeways such as a river, canal, or rail and road corridors. Grows outwards along a wedge at each side of transport routes Zone 3 – is the lower class residential sector: people choose to live in this zone because it is beside zone 2, where many of them work. Short & cheap commute to work. Air & noise pollution are high. Zone 4 – middle class neighbourhood: Spacious, leafy with a clean environment. Zone 5 – high class residential area: Most desirable part of city.

20 Harris & Ullman Multiuple-Nuceli Theory
Harris and Ullman proposed that as an area develops over time, it tends to grow around a number of different business centres (multiploe nuclei) rather than around a single CBD The theory is a mixture of the previous 2 theories. The different centres aatract growth and may become the focus for further development – they are mini CBDs For example Tallaght has its own housing, industry, transport, health and education services The model does not fit all towns exactly. 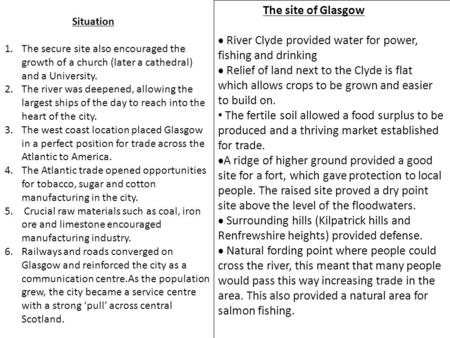 The site of Glasgow  River Clyde provided water for power, fishing and drinking  Relief of land next to the Clyde is flat which allows crops to be grown.