3 Lincoln’s Plan In late 1863 Lincoln issued a Proclamation of Amnesty and Reconstruction, offering forgiveness to all southerners who pledged loyalty to the Union and supported emancipation. Lincoln’s Ten-Percent Plan stated that once 10 percent of a southern state’s voters took the oath, they could organize a new state government, which had to ban slavery. Some Congress members thought re-admitting states to the Union was only a power of Congress; some thought the South never officially left the union. Others thought southern states should go through the same admission process for statehood as territories. Presidential Reconstruction Lincoln’s Plan Sparks Debate in Congress Congress Responds, Tragedy Strikes Congress’ own plan, the Wade-Davis Bill, required a majority of a state’s white men to pledge the oath, not just 10 percent. It was vetoed by Lincoln. Lincoln was assassinated by John Wilkes Booth in 1865, and didn’t live long enough to carry out his Reconstruction plans for the South.

4 Johnson’s Plan The Reconstruction Plan: Added wealthy southern men to the list of those who needed to be pardoned by government Did not, according to Charles Sumner, Thaddeus Stevens, and other powerful members in Congress, provide any role in government for freedmen, or those freed from slavery Was welcomed by white southerners, who could form state governments on their own terms Reactions in the South: Former Confederates took state offices and were sent to Congress. The Black Codes were formed, keeping freedmen in a dependent position and providing cheap farm labor. Private groups formed like the Ku Klux Klan, who enforced the Black Codes and terrorized African Americans and their supporters. After Lincoln’s death, Vice President Andrew Johnson became president. Though he was a Democrat, Republicans thought he would work with them because he didn’t seem as forgiving as Lincoln. As a Tennessean from a poor family, Johnson didn’t dislike the South, just wealthy planters. Johnson’s plan was similar to Lincoln’s, with a few changes.

5 Congress Takes Control  Supported the Freedmen’s Bureau, an organization Congress created in 1865 to help former slaves and poor whites in the South.  It allowed the bureau to build more schools and provide other aid.  Civil Rights Act of 1866 – gave African Americans citizenship – guaranteed them the same legal rights as white Americans Most northerners supported Johnson’s plan, until the Black Codes and the return of former Confederates to power upset them. That strengthened Radical Republicans, who wanted a stronger Reconstruction program to reshape southern society politically and economically, and to help freedmen gain equality. After Congress reconvened in 1866, moderate Republicans, who controlled both the House and the Senate, proposed two bills. Both bills passed in Congress, but Johnson’s veto led moderate Republicans to help Radical Republicans take over Reconstruction.

6 To protect the Civil Rights Act of 1866, Congress passed the Fourteenth Amendment, requiring states to grant citizenship to everyone born or naturalized in the United States and promising “equal protection of the laws.” In the 1866 congressional elections, Radicals gained enough votes to take over Reconstruction, and passed four Reconstruction Acts Congress also passed the Tenure of Office Act in 1867, requiring the Senate’s permission to remove any official it appointed. When Johnson tested the act by firing Secretary of War Edwin Stanton, who supported Radical Republicans, the House voted to impeach him. The Senate lacked one vote for the two-thirds majority they needed to remove Johnson from office. Republicans chose Civil War war hero Ulysses S. Grant as their candidate in the 1868 presidential election. About half a million African American votes gave Grant the victory. Congress passed the Fifteenth Amendment, protecting African American male voting rights. As Congress took control of Reconstruction, discrimination slowed and the Black Codes were repealed. Radical Reconstruction

7 Economic Changes For many freedmen, owning land meant freedom, but even those with money found landowners unwilling to sell to them and give them economic independence. A new labor system gradually arose. 2.Tenant farmers rented their land from landowners and could grow any crop. Many grew food crops, not cotton, to provide both food and income. 1.Sharecroppers received a share of their employers’ crops. The employer provided land, shelter, seeds, animals, and tools. The sharecropper provided labor.

8 Reconstruction Ends Violence Violence plagued the South during Reconstruction. The KKK and similar groups terrorized minorities. 1)targeted African American leaders and people of both races with burnings and violence. 2)beat Freedmen’s Bureau teachers and murdered public officials, many of whom resigned. Congress passed Enforcement Acts that set penalties for trying to prevent a qualified citizen from voting and gave the army and federal courts the power to punish Klan members. Discontent Eventually, most people were unhappy with Reconstruction. The army still had to keep the peace in the South, and the Republican government seemed ineffective. African Americans were unhappy about their poverty and lack of land reform and all were discouraged by the South’s poor economy. Some said Reconstruction governments were corrupt. These conditions strengthened the Liberal Republicans, who broke party and helped Democrats win back Congress in 1872.

9 By the mid-1870s it was clear that Reconstruction was ending. Its fiercest leaders, Thaddeus Stevens and Charles Sumner, had died. Supreme Court decisions, such as the Slaughterhouse Cases, in which the Court said that most civil rights were under state control and not protected by the Fourteenth Amendment, weakened its protections. As support for Reconstruction declined, southern Democratic leaders and supporters grew bolder. Lawlessness and violence against Republican candidates increased, and some were murdered. When Mississippi’s governor asked Ulysses S. Grant for help in 1875, he refused. In the 1876 presidential election, Rutherford B. Hayes was given the presidency when Republicans promised to withdraw federal troops from the South, causing the collapse of Republican state governments. Some called the post-Reconstruction South “the New South.” The Impacts of Reconstruction 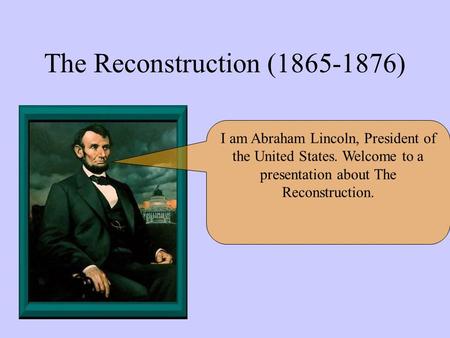 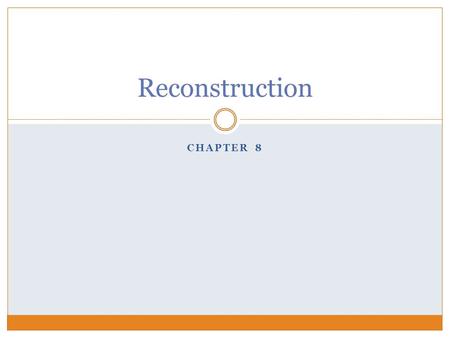 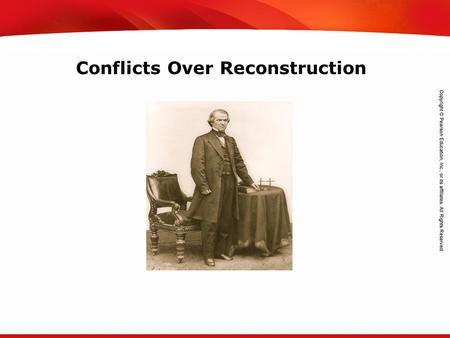 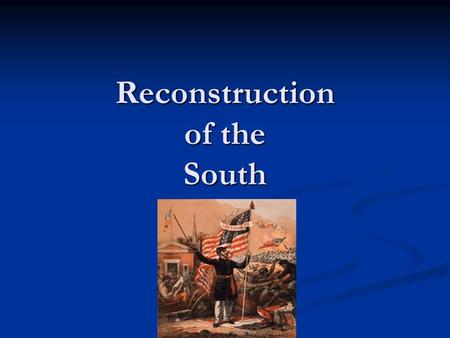