2 The Supreme Court Boosts National Power
Gibbons vs. Ogden Ogden believed he was the only operator legally entitled to run a steamboat service on a stretch of the Hudson because he had purchased a license. Purchased to run from New York to New Jersey Gibbons began to run a similar steamboat service in that area. Ogden took him to court and the Supreme Court ruled in favor of Gibbons Court can rule in anything that crosses state lines

3 Strengthening Government Economic Control
McCulloch v. Maryland (1819) Maryland laid a heavy tax on local branch of Bank of United States (wanted to tax it out of existence) Marshall declared if situations were allowed then states would be overturning laws enacted by Congress. Declared Bank of United States constitutional.

4 Limiting State Powers Several rulings that blocked state interference in business and commerce. Fletcher v. Peck (1819) – nullified a Georgia law that violated individuals’ constitutional right to enter into contracts. Dartmouth College v. Woodward (1819) – state of New Hampshire could not revise the original charter it had granted to college’s trustees in colonial times because a charter was a contract, and the Constitution didn’t permit states to interfere with contracts.

5 Nationalism Shapes Foreign Policy
John Quincy Adams (Secretary of State) – established a foreign policy based on nationalism. National interests and national unity should be placed ahead of regional concerns and that foreign affairs should be guided by national self-interest.

6 Territory and Boundaries
Adams wanted security for the nation and expansion of its territory. The Rush-Bagot Treaty (1817) led to the U.S.A and Canada demilitarizing its border. Joint occupy Oregon Territory with Britain. 1819 Adams – Onís Treaty – Spain ceded Florida to United States.

7 The Monroe Doctrine Spain and Portugal tried to move back into their old colonial areas, and Russia was pushing in from the northwest. United States had to do something. Monroe Doctrine: European Nations should not attempt to create new colonies or try to overthrow the newly independent republics in the hemisphere. U.S. would consider these actions “dangerous to our peace and safety” United States wouldn’t involve themselves in European affairs or interfere with colonies in the Western Hemisphere.

8 Expansion to the West Went west to
Escape law Buy cheap land Search of economic gain Could obtain occupations more easily Northwest Ordinance of 1787 laid framework to become a state: Population had to be 60,000 People in territory could petition Union for admission, draft a state constitution, elect representatives, and become part of United States, when Congress approved.

9 The Missouri Compromise
1818 10 free states and 10 slave states Illinois would be 11 free state and assumed Missouri would be 11 slave state. Bill to have Missouri end slavery passed in House and blocked in Senate. During argument Alabama entered as a slave state. Sectionalism occurring. South said North was trying to end slavery Northerners said Southerners wanted to have slavery in all new states. 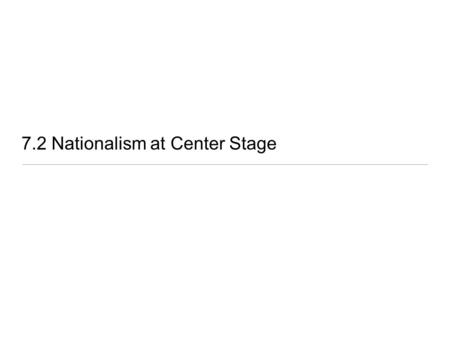 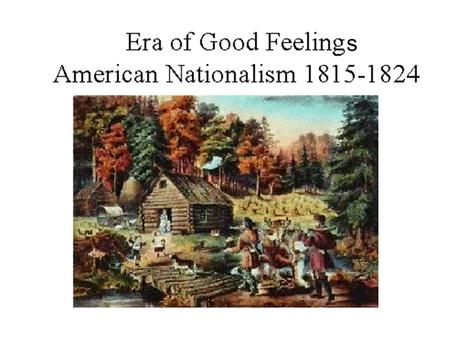 S. The Election of 1816 The Demise of the Federalist Party.