Presentation on theme: "U.S. Supreme Court. The only court specifically stated in the Constitution – Led by a chief justice The highest court in the nation Justices are appointed."— Presentation transcript:

2 The only court specifically stated in the Constitution – Led by a chief justice The highest court in the nation Justices are appointed by the President and approved by1/2vote of the Senate Appointments are for life “in good behavior” – Can be impeached, die, or resign

6 U.S. Supreme Court Judicial Review: the power to decide the constitutionality of an act of government – Makes the Supreme Court the final authority on the meaning of the Constitution Marbury v. Madison (1803): established the power of judicial review and the first time the court used it

8 Marbury v. Madison, 1803 William Marbury’s appointment was approved by the Senate on 3-3-1801 Jefferson took office on 3-4-1801 Noticed appointments were not delivered Ordered Madison not to deliver appointments

10 U.S. Supreme Court The Court receives 8000- 10,000 petitions each term; agree to hear about 100 cases The term begins on the first Monday in October; break in June/July When a case is appealed to the Court it can: – Allow the lower court ruling to stand – Send the case back to the lower court to reconsider it – Agree to hear the case

11 U.S. Supreme Court Rule of 4: court needs 4/9 justices to agree to put a case on the court’s docket May not grant cert if – A similar case has already been decided – Not ready to deal with the issue – Not a relevant constitutional issue Writ of Certiorari: an order by the Court directing a lower court to send up the record in a given case for its review

12 How the Court Operates Once a case is accepted the Court sets a date the arguments will be heard 2 week cycles 10am on M,T, W and sometimes TH Lawyers get 30 minutes to argue their case – White light flashes when 5 minutes remain – Red light means time is out

13 How the Court Operates Briefs: written documents filed with the Court before oral arguments begin – Detailed statements supporting one side of the case – Summarizes facts and case law – Many are hundreds of pages Amicus curiae: friend of the court briefs filed by people who have a vested interest but are not part of the case

Download ppt "U.S. Supreme Court. The only court specifically stated in the Constitution – Led by a chief justice The highest court in the nation Justices are appointed." 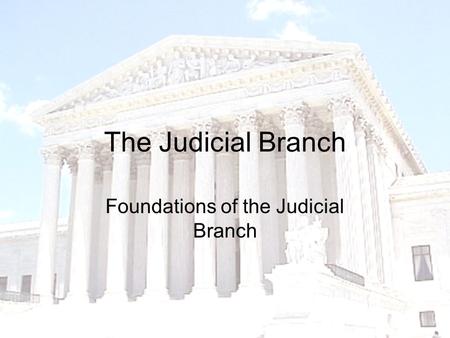 Foundations of the Judicial Branch