3 Ancient Greek Models of Atoms
Democritus believed that all matter consisted of extremely small particles that could not be divided.

4 Ancient Greek Models of Atoms
Democritus called these particles atoms from the Greek word atomos, which means “uncut” or “indivisible.” He thought there were different types of atoms with specific sets of properties

5 Aristotle Thought that all substances were built up from only four elements.

6 Dalton’s Atomic Theory
Proposed the theory that all matter is made up of individual particles called atoms, which cannot be divided. Compounds contain atoms of more than on element. In a particular compound, atoms of different elements always combine in the same way.

8 Dalton’s Model The elements are pictured as solid spheres.

10 Thomson’s Experiment Thomson’s experiments provided the first evidence that atoms are made of even smaller particles.

11 Thomson’s Model (plum pudding)
In an atom, the negative charges were evenly scattered throughout an atom filled with a positively charged mass of matter.

15 Rutherford’s Model All of an atom’s positive charge is concentrated in its nucleus. The nucleus is a dense, positively charged mass located in the center of the atom. Pretending to be Alpha Particles Mv.

20 Properties of Subatomic Particles
Protons, electrons, and neutrons can be distinguished by mass, charge, and location in an atom.

23 Mass Number the sum of the protons and neutrons in the nucleus of that atom.

24 Isotopes Isotopes atoms of the same element that have different numbers of neutrons and different mass numbers.

30 1897: JJ Thomson Discovers the electron
He pictures electrons embedded in a sphere of positive electric charge.

32 1913: Niels Bohr Electrons move in spherical orbits at fixed distances from the nucleus.

33 1926: Electron Cloud Model A visual model of the probable locations of electron in an atom.

34 1932: James Chadwick Confirms the existence of neutrons in the nucleus. Neutrons have no charge. 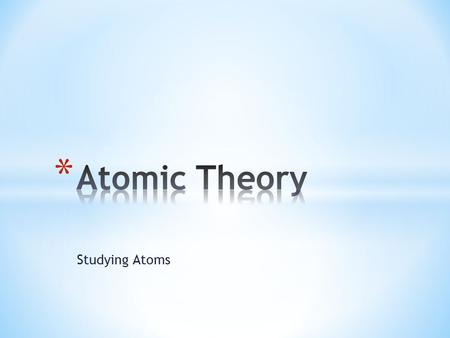 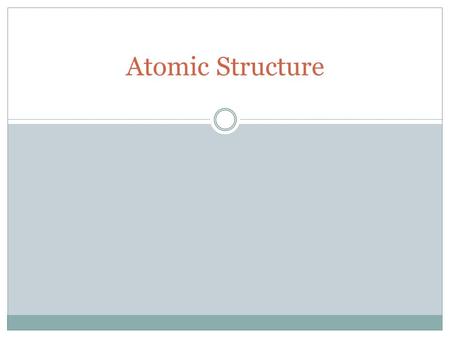