1 Charlemagne “Charles the Great” and the Holy Roman Empire Lesson 11-1 1.

3 3 The Middle Ages - 500-1500 A.D. After the fall of the Roman Empire, stability in the west was threatened. Wave after wave of invaders or barbarians destroyed Roman towns and cut off trade routes. Many western lands were reclaimed by invaders. Reading and writing almost disappeared from Europe because many of the invading groups could do neither. 3

4 4 The Middle Ages - 500-1500 A.D. With the end of the Western Roman Empire, no single government had complete control in Europe. The Roman Empire was replaced with a patchwork of small kingdoms. 4

5 5 Division Line between East and West 5

8 8 Pope Gregory I – Responsible for developing many Church teachings – Created rules of behavior for priests – Set up monasteries, or centers of Christian life and learning – Developed a plan to make all of Europe a land of Christians, or Christendom 8

9 9 “Charles the Great” The Roman Catholic Church gained even more power under the Germanic ruler Charles the Great. Charles the Great was king of the Franks. (Gaul or current-day France.) Known as Charlemagne, he brought back unity and order to many of the lands that had been part of the former Western Roman Empire. 9

10 10 Charlemagne Charlemagne: – Great warrior – Respected learning and encouraged education – Known as a man of wisdom – His grandfather, Charles Martel, defeated Muslims at the Battle of Tours in 732, ensuring Europe would become a Christian nation. – Goal was to unite Germanic tribes into a single Christian kingdom (Christendom) 10

12 12 Charlemagne – Defended the city of Rome and the pope against the Lombards – Christmas Day 800 A.D., Pope Leo III crowned Charlemagne as Augustus emperor of the Romans – Founded the Holy Roman Empire formed from lands previously part of the Western Roman Empire 12

15 15 Accomplishments Charlemagne (Charles the Great) – Improved education (reading and writing) – Issued money – Increased trade – Spread the Christian religion - Confess God or meet God – When Charlemagne defeated the Saxons, he expected them to convert to Christianity. He beheaded 4,000 in one day.

16 16 Feudal System Charlemagne gave huge land grants to loyal nobles. This was similar to the practice of creating Roman provinces. The nobles agreed to provide military and political services to him as emperor, as well as upkeep of roads, bridges and forts on their land. This system of land grants was the basis of feudalism; the political and military system of Europe that lasted for about 400 years. 16

17 17 Charlemagne’s Death After Charlemagne’s death, his empire or the Holy Roman Empire, was divided among his three sons. They fought one another, weakening the empire. Other groups attacked and weakened the empire. The fiercest attacks came from the Vikings. 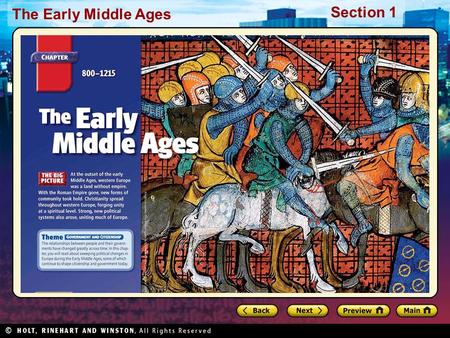 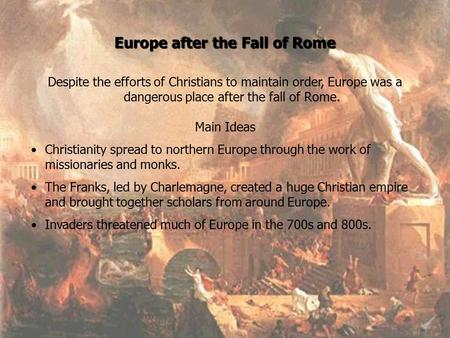 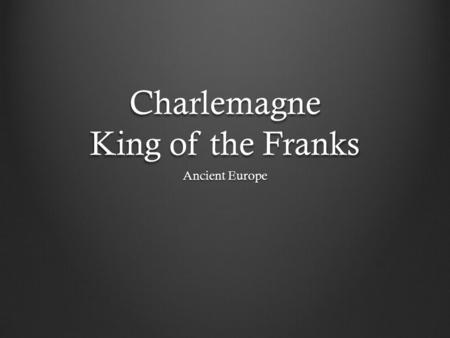 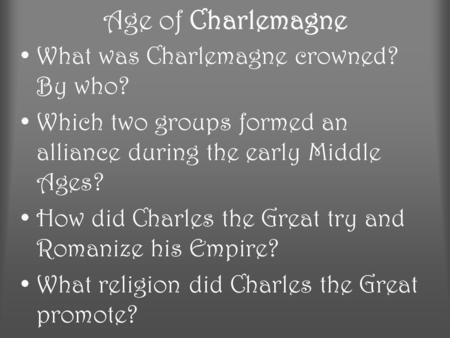