3 Author-Page Style The author's last name and the page number(s) from which the quotation or paraphrase is taken must appear in the text. A complete reference should appear on your Works Cited page. The author's name may appear either in the sentence itself or in parentheses following the quotation, but the page number(s) should always appear in the parentheses, not in the text of your sentence.

5 Print Sources with No Known Author
When a source has no known author, use a shortened title of the work instead of an author name. Place the title in quotation marks if it's a short work (e.g. articles) or italicize it if it's a longer work (e.g. plays, books, television shows, entire websites) and provide a page number.

9 Include in the text the first item that appears in the Work Cited entry that corresponds to the citation (e.g. author name, article name, website name, film name). You do not need to give paragraph numbers or page numbers based on your Web browser’s print preview function. Unless you must list the website name in the signal phrase in order to get the reader to the appropriate entry, do not include URLs in-text. Only provide partial URLs such as when the name of the site includes, for example, a domain name, like CNN.com or Forbes.com as opposed to writing out or

10 Short Quotations To indicate short quotations in your text, enclose the quote within double quotation marks. Provide the author and specific page citation in the text, and include a complete reference on the Works Cited page. Punctuation marks such as periods, commas, and semicolons should appear after the parenthetical citation. Question marks and exclamation points should appear within the quotation marks if they are a part of the quoted passage but after the parenthetical citation if they are a part of your text.

12 Long Quotations For quotations that extend to more than four lines, place quotations in a free-standing block of text and omit quotation marks. Start the quotation on a new line, with the entire quote indented one inch from the left margin; maintain double-spacing. Your parenthetical citation should come after the closing punctuation mark. When quoting verse, maintain original line breaks.

13 Nelly Dean treats Heathcliff poorly and dehumanizes him throughout her narration:
They entirely refused to have it in bed with them, or even in their room, and I had no more sense, so, I put it on the landing of the stairs, hoping it would be gone on the morrow. By chance, or else attracted by hearing his voice, it crept to Mr. Earnshaw's door, and there he found it on quitting his chamber. Inquiries were made as to how it got there; I was obliged to confess, and in recompense for my cowardice and inhumanity was sent out of the house. (Bronte 78)

14 Adding Words in Quotes If you add a word or words in a quotation, you should put brackets around the words to indicate that they are not part of the original text. Jan Harold Brunvand, in an essay on urban legends, states: "some individuals [who retell urban legends] make a point of learning every rumor or tale" (78).

15 Omitting Words in Quotes
If you omit a word or words from a quotation, you should indicate the deleted word or words by using ellipsis marks, which are three periods ( ) preceded and followed by a space. For example: In an essay on urban legends, Jan Harold Brunvand notes that "some individuals make a point of learning every recent rumor or tale and in a short time a lively exchange of details occurs" (78). 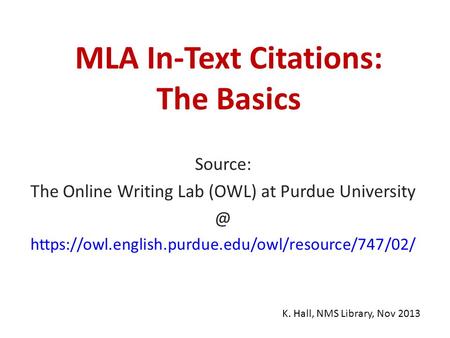 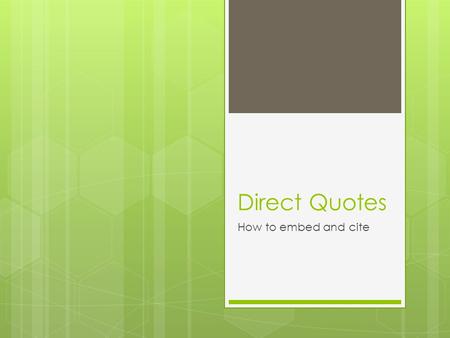 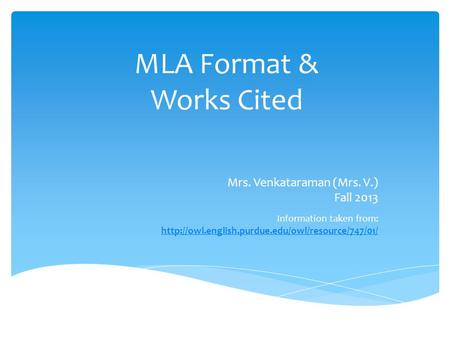 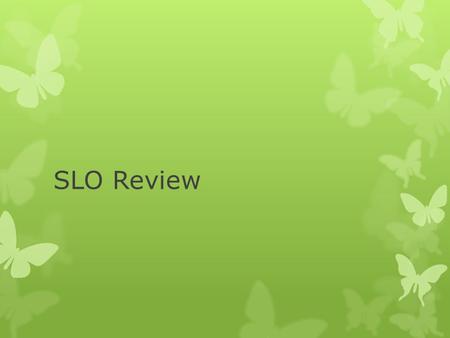