2 HIV/AIDS and Children in Asia Pacific Asia Pacific has 151,000 children, 0-14 years, living with HIV Break down by COs not available, except Cambodia 4,400; PNG 1,100; Thailand 14,000 28% of all infants born to infected mothers are receiving ART prophylaxis 16% in need of ART are receiving cotrimoxazole treatment ARV Majority of children on treatment are in Thailand, Cambodia & India Main transmission route among children is mother -to-child, and a small percentage through unsafe blood supply and unsafe injections Many are children of injecting drug users, sex workers and men who buy sex, facing dual or multiple discrimination and at the same time making them vulnerable to HIV infection With growing feminization of AIDS in the region, children continue to be at risk of infection, and more are facing grim prospects of orphanhood Source: The State of the World’s Children, 2009, UNICEF

3 Protecting children in the context of the spread of HIV in Asia Low or no risk females Clients Low or no risk males MSMIDUs FSW Children Approximately 90 percent of HIV infections among children (0-14 yrs) are associated with mother-to-child transmission Feminization of AIDS Source: Dr Tim Brown, FHI and East-West Center, Hawaii, USA

4 HIV and Women - globally half of adults living with HIV are women, about one-third in Asia Source: 2008 Report on the Global AIDS Epidemic, UNAIDS

5 Feminization of AIDS in Asia Pacific Major source of infection among women is through partners Cambodia - more than 43% of new infections were among married women and more than a third of new infections were from mother-to child (2008 data) Malaysia – nearly one-fifth of newly infected persons in 2006 were women and girls compared to barely 5% a decade ago China - the estimated number of women living with HIV increased by 67% from 2005 to 2007, slightly more than men Myanmar – the male to female ratio of reported cases changed from 8:1 in 1994 to 2.2:1 in 2006 Thailand - HIV prevalence is increasingly found in women infected by their husband or sexual partner. Young people aged 15-24 years now constitutes more than 60% of all new HIV infections Sources: UNGASS Country Report – Malaysia; January 2006 to December 2007, January 2008; UNAIDS/WHO, 2008 Report on the global AIDS epidemic - China, July 2008; Report from the Technical Working Group on HIV Estimates and Impact Analysis in Myanmar Mandalay August 15-16, 2007; 2008Cambodia HIV/AIDS Programme comments for consideration for the CPD; WHO, UNAIDS and UNICEF. Epidemiological fact sheet on HIV and AIDS: Thailand, July 2008

6 % of pregnant women that need to be tested and received HIV test results, selected countries in Asia, 2008 Source: Country reports, Joint Global Reporting on the Health Sector’s Response to HIV/AIDS, 2009, prepared by www.aidsdatahub.org

10 Coverage even lower for HIV+ women receiving ART for their own health and survival Source: Country reports, Joint Global Reporting on the Health Sector’s Response to HIV/AIDS, 2009, prepared by www.aidsdatahub.org Children risk losing their mothers – a new generation of AIDS orphans

11 AIDS Orphans and Vulnerable Children in Asia-Pacific 1.75 million children who have lost one or both parents to AIDS in Asia Pacific ( 11% of AIDS orphans globally, 1.3 million in South Asia and 450,000 in East Asia and the Pacific, 2005 estimates) Estimated 67.5 million orphans due to all causes in Asia Pacific 151,000 children (0-14) are infected with HIV in the region Children affected by AIDS is estimated based on adult HIV prevalence and fertility rates, regional figures not known Vulnerable children (to risks and threats to HIV) estimate is not known Not all of these children are in need of protection care, support but the majority are, especially children of MARPs, whom we can begin to identify and work with. Sources: The State of the World’s Children, 2009, UNICEF; A profile of UNICEF’s response in the East Asia and the Pacific, 2007, UNICEF EAPRO; SAARC Regional Strategic Framework for Protection, Care and Support of Children Affected by HIV/AIDS; Dr. Tim Brown, ICAAP 2005, Kobe)

12 Childhood Poverty and Impact of HIV/AIDS Households affected with HIV do have lower incomes, and often experience lost productivity and economic decline related to increased expenditures, especially on health Poverty is a major factor in reduced access to education in the region Orphans are less likely to attend school than non-orphans Paternal orphans have lower school attendance than non-orphans (Cambodia) Older orphans appear more vulnerable to school drop out (Thailand) Source: Protection and Care for Children Faced with HIV/AIDS in East Asia and the Pacific: Issues, Priorities, Responses in the Region, 2009, UNICEF EAPRO.

13 Response to HIV and Children Children most at risk of HIV are those in poverty and those that are vulnerable due to their situation (children of CSWs, IDUs, MSM with female spouses, and men who buy sex) Address the multiple vulnerabilities faced by children infected with or affected by HIV Greater social protection of these children contribute to HIV prevention Social protection measures for children and families linked to health sector response in terms treatment and care of adults and children is urgently required

14 14 Scaling up strategies in response for children Linking PMTCT with maternal child health, sexual reproductive health and STI programmes to strengthen continuum of HIV prevention and care, along with improved partners counseling and referral Strengthening VCT services for couples at ANC, RH and STI clinics Engaging women and men living with HIV through self-help groups to reduce loss to follow up to treatment and care Advocating community-based, faith-based and multi-sector approaches for care and support of children and families affected by HIV & AIDS Supporting high-level advocacy on linkages within health system and with social support services (social welfare system) Supporting national assessments of burden of HIV on children within the context of overall situation of orphans and vulnerable children Combination of prevention and protection measures work best to address multiple vulnerabilities facing children

17 What governments and civil society can do? Low and concentrated epidemic – decision on targeting vs. universality given limited resources Stronger social protection policy and implementation Improved surveillance and assessment – to identify most at risk children and adolescents Stronger social support to children infected and affected by AIDS, and all orphans and vulnerable children who are poor Improved operational linkages between health and social sector, manage referrals and community support for improved access and impact Strengthen evidence on AIDS impact on children and put children on costed National Strategic Plan for protection, prevention care and support 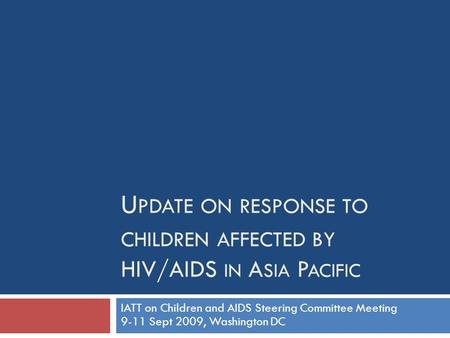 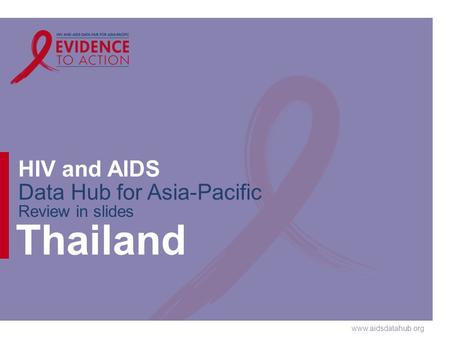 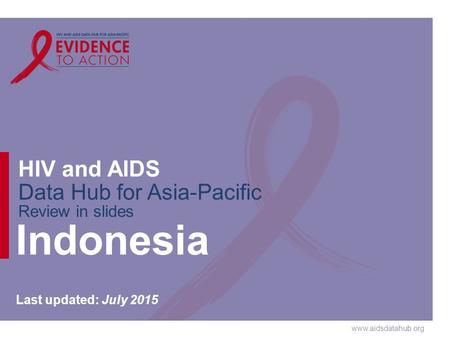 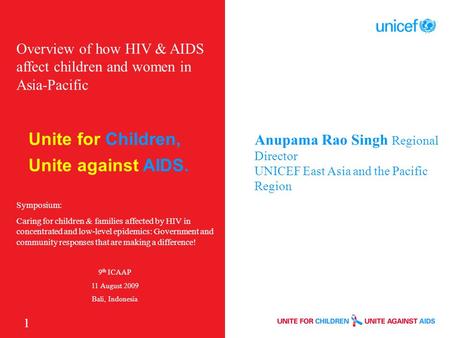 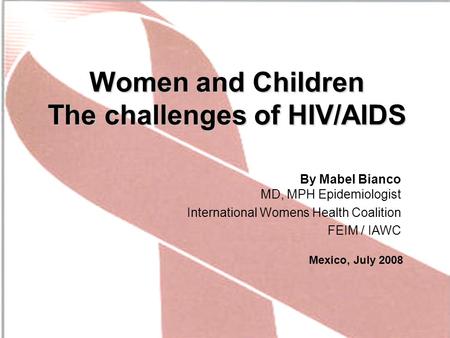 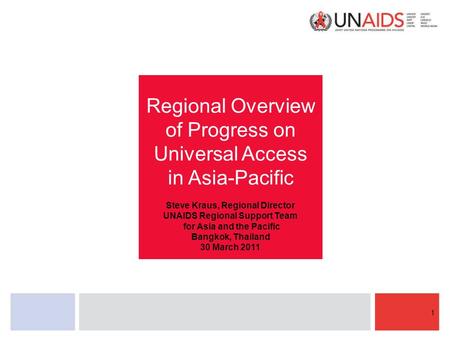 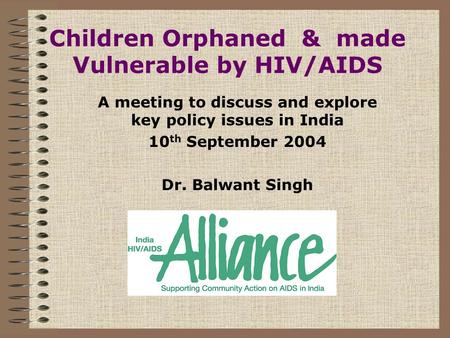 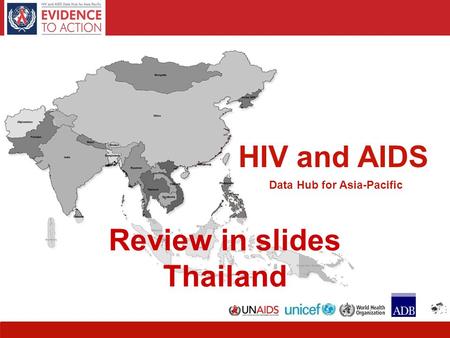 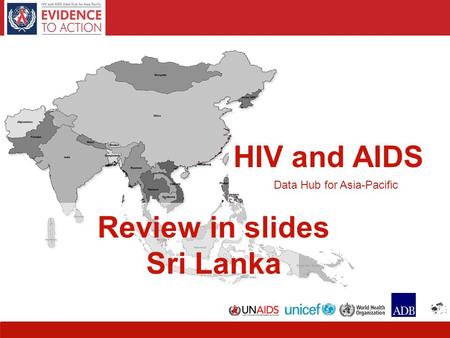 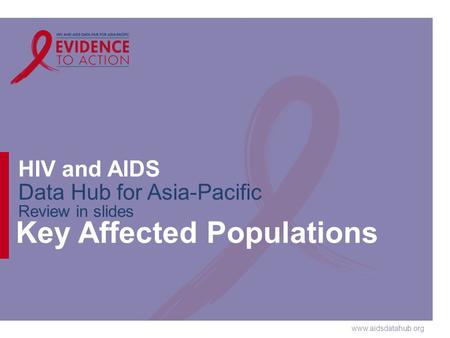 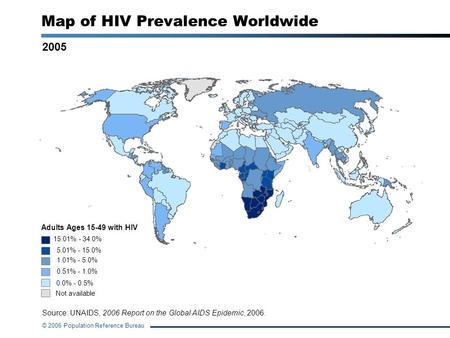 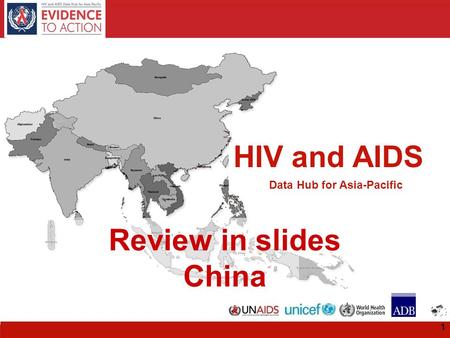 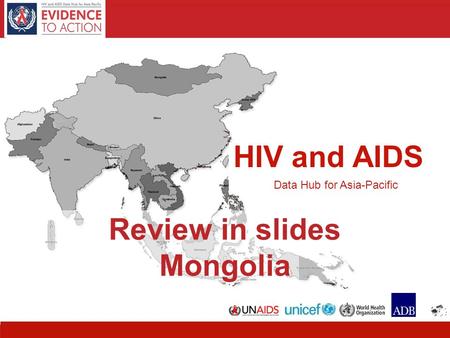 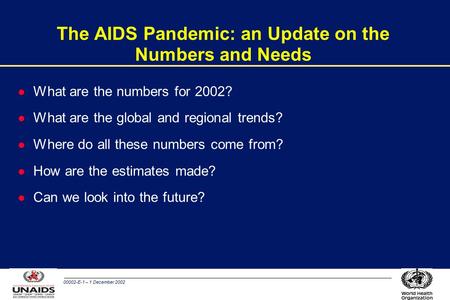 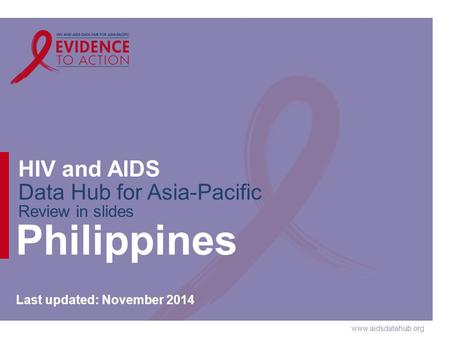 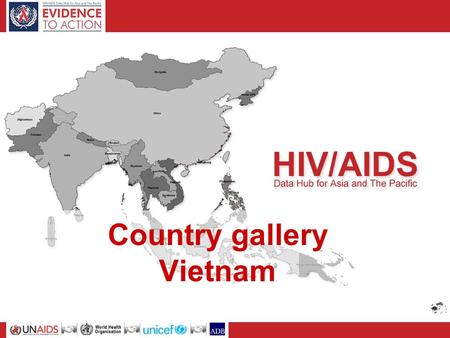