Detail of William Clark with Shoshone guide Sacagawea at Three Forks of the Missouri in 1805. The Presidency of Thomas Jefferson shapes the U.S. government.

Presentation on theme: "Detail of William Clark with Shoshone guide Sacagawea at Three Forks of the Missouri in 1805. The Presidency of Thomas Jefferson shapes the U.S. government."— Presentation transcript:

1 Detail of William Clark with Shoshone guide Sacagawea at Three Forks of the Missouri in 1805. The Presidency of Thomas Jefferson shapes the U.S. government. The Louisiana Purchase and the War of 1812 strongly affect the nation. The Jefferson Era, 1800–1816

2 Jefferson Takes Office When Jefferson becomes President in 1801, his party replaces Federalist programs with its own.

10 Jefferson purchases the Louisiana Territory in 1803 and doubles the size of the United States. The Louisiana Purchase and Exploration

17 Spain gives Louisiana Back to France In 1800, Spain signs treaty with France giving them back. Louisiana. Jefferson knew Napolean wanted to conquer Europe. Napolean needed Louisiana to grow food and ship it to French Islands in the West Indies. A revolution in Haiti caused these plans to change.

18 Jefferson decides to try and buy Louisiana Jefferson sends Robert Livingston and James Monroe to buy New Orleans from Napolean. They had $10 million they could spend. They meet with Talleyrand, the French Foreign Minister.

19 Offer They Can ’ t refuse After losing Haiti, Napolean gives up on America and needs money. Talleyrand now asks Livingston if the U.S. wanted to buy all of the Louisiana Territory.

20 Here ’ s the Deal-I-O Livingston offers $4 million Talleyrand says it was too low and they should “ Reflect and see me tomorrow. ” They agreed to pay $15 million for Louisiana even though they didn ’ t have the authority to do so.

21 “ From this day the United States take their place among the powers of the first rank.”

22 Now Jefferson has one major question Nowhere in the Constitution does it give the president the power to buy land. He reasoned that he could because the had the power to make treaties.

23 Louisiana Purchase Treaty Passed The Senate approved the Treaty and it went into effect in 1803. The size of the nation has now doubled.

25 This sets the stage for…

28 Learn about Indian nations – He wanted to trade with them like English, French, and Spanish did. – Tell the Indians of “ our wish to be neighborly, friendly, and useful to them ”

29 Corps of Discovery Lewis and Clark pick aprox. 50 men to join expedition on basis of: character, strength, hunting skills, ability to survive in wilderness. Group included York, a slave who had been Clark’s companion since boyhood.

30 May 1804 Lewis and Clark start up the Missouri River from St. Louis. They are going upstream.

31 The broad grassy plains marveled them.

34 They meet Sacajawea While staying with the Mandans in N. Dakota area they were worried about how to cross Rockies Sacajawea, a Shoshone agreed to accompany them with her French Canadian husband.

36 Early Spring 1805 Sacagawea guides the expedition over the Rockies. They met some Shoshones including Sacajawea ’ s brother. They supply food and horses and helped them get over the Rockies

41 Zebulon Pike From 1805-1807 Zebulon Pike explored the upper Mississippi River, Arkansas River, and parts of what is now Colorado and New Mexico.

44 Pike Pike ends up going southward into Spanish territory. He gets arrested and all of his maps get taken. He hides a map in the barrel of his gun. He ends up dying in War of 1812.

45 Settlers end up moving into the Louisiana territory from the Mississippi River westward. Louisiana itself becomes a state in 1812.

Download ppt "Detail of William Clark with Shoshone guide Sacagawea at Three Forks of the Missouri in 1805. The Presidency of Thomas Jefferson shapes the U.S. government." 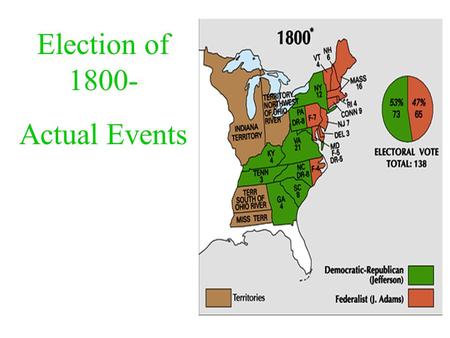 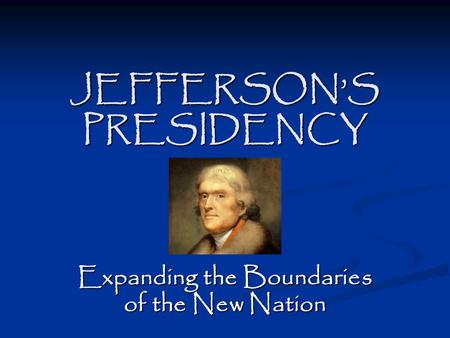