Presentation on theme: "What are the 5 principles of the constitution."— Presentation transcript:

3 1st Amendment The Founders of the United States believed that protecting individual rights and providing for the safety and well-being of citizens were important purposes of government.

5 1st Amendment The First Amendment to the Constitution protects five basic freedoms: freedom of religion, freedom of speech, freedom of the press, freedom of assembly, and freedom to petition the government They ensure that each of us can develop our own beliefs, express ourselves freely, meet openly with others, and have our views on public matters heard by those who govern.

6 Freedom of Religion Intolerance of different beliefs in their homelands forced many colonists to come to America in the first place. The First Amendment prohibits Congress from establishing an official religion in the United States.

7 Freedom of Religion It protects the freedom of Americans to practice their faith as they wish. The government may not favor one religion over another or treat people differently because of their personal beliefs

8 Freedom of Speech Face-to-face discussions, telephone conversations, lectures, and radio and TV broadcasts are covered by the guarantee of free speech. As interpreted by the Supreme Court, "speech" can mean Internet communication, art, music, or even clothing.

9 Examples: DO NOT COPY In 1965, for example, 13-year-old Mary Beth Tinker and two other students wore black armbands to school to mourn those who died in the Vietnam War. School authorities suspended them for wearing the armbands, and the teens eventually took their case to the Supreme Court. In its landmark 1969 decision, the Court ruled that the armbands were a form of speech protected by the First Amendment. See Landmark Supreme Court Case Studies on page 108.

10 Freedom of the Press The First Amendment allows Americans to express themselves in print as well as in speech. "the press" referred to printed publications such as books, newspapers, and magazines. Today the press includes many other sources of media, such as radio, television, and computer networks

11 Freedom of the Press Freedom of the press ensures that the American people are exposed to a wide variety of viewpoints. The government cannot practice censorship; that is, it cannot ban printed materials or films merely because they contain alarming or offensive ideas, and it also cannot censor information before it is published or broadcast.

12 Freedom of Assembly The First Amendment protects our right to gather in groups for any reason, so long as the assemblies are peaceful. We have the right to attend meetings, parades, political rallies, and public celebrations. Governments may make rules about when and where such activities can be held, but they cannot ban them.

13 Freedom of Assembly The Supreme Court has decided that freedom of assembly implies freedom of association. Thus the First Amendment also protects our right to form and join social clubs, political parties, labor unions, and other organizations. Even if we never assemble with fellow members, we have the right to belong to such groups

14 Freedom to Petition Finally, the First Amendment guarantees all Americans the right to petition the government. A petition is simply a formal request.

15 Freedom to Petition Often we use the word to refer to a specific kind of document—a brief, written statement signed by hundreds or thousands of people. Even a simple letter or written by an individual, however, could be considered a petition

16 Petition The right to petition means the right to express one's ideas to the government. Example: If you want to complain about overcrowded schools, for example, or suggest that a skating park be built in your community, you can write to your elected representatives. If enough people express similar views, government leaders may take action

17 Limits to First Amendment Freedoms
The Supreme Court has decided that compelling public interests—the safety and security of Americans—may justify limitations on our First Amendment freedoms. Freedom of speech, for example, does not include the right to endanger our government or other Americans.

18 Limits You do not have freedom to provoke a riot or other violent behavior. You are not free to speak or write in a way that immediately leads to criminal activities or efforts to overthrow the government by force

19 Examples: Do Not copy Citizens should use their civil liberties responsibly, which means they should not interfere with the rights of others. For example, you are free to talk with your friends in the street, but you must not block traffic. You may campaign for causes, but you may not disturb your neighbors with blaring loudspeaker broadcasts. You may criticize government officials, but you may not spread lies that harm a person's reputation. Spreading such lies is a crime called slander if the lies are spoken and libel if they are printed

Download ppt "What are the 5 principles of the constitution." 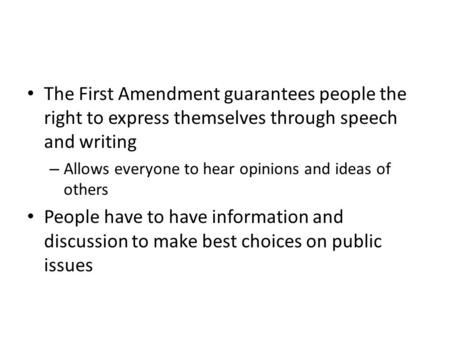 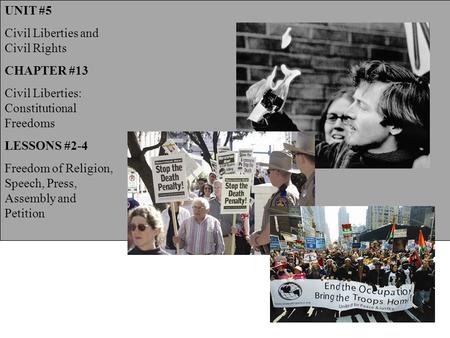 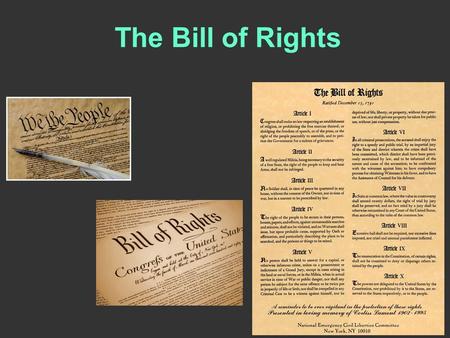 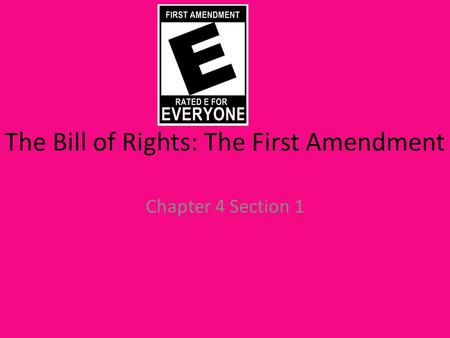 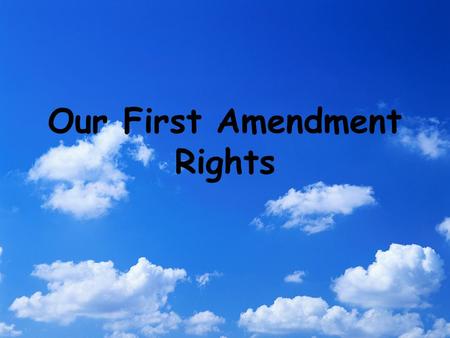 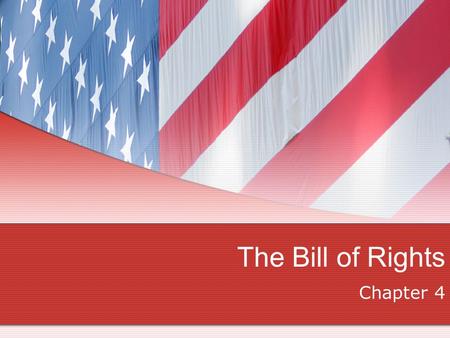 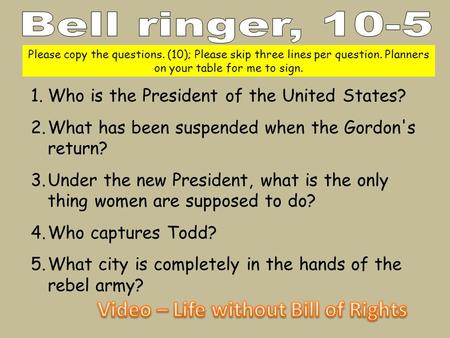 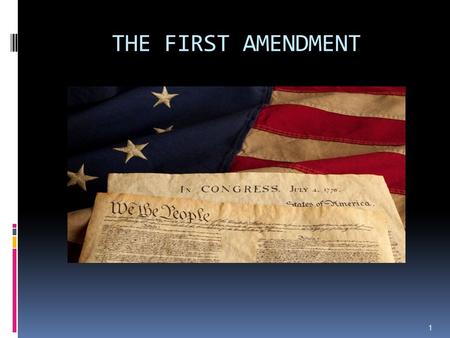 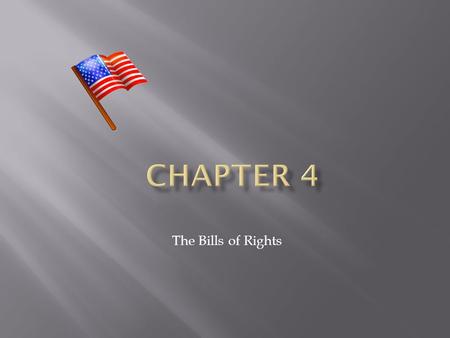 Chapter 4 The Bills of Rights. 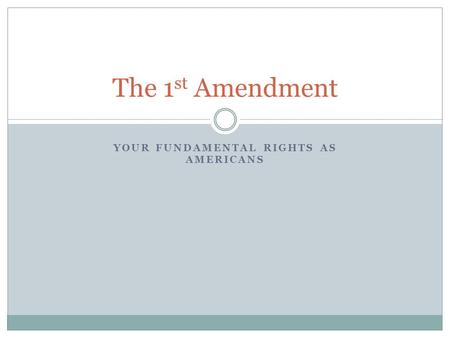 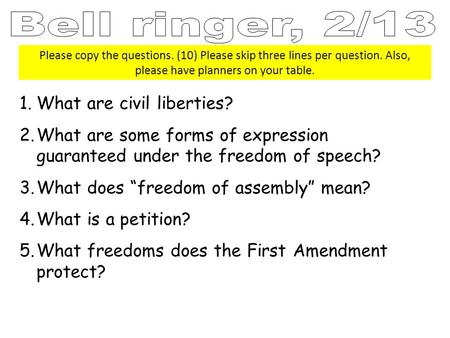