3 VOTING HISTORY White Males 21 years of age or older (early US history) Black Males (15 th Amendment) Females (19 th Amendment) 18 Years of Age REGISTERING TO VOTE Where? – County Offices, DMV What? – Proof of Citizenship, Address, & Age – Driver ’ s License or Birth Certificate QUALIFICATIONS TO VOTE 18 Years of age Resident of state for a specific amount of time Citizen of the US States may deny if you have committed a serious crime Cannot vote while in prison VOCABULARY Polling Place – location where people vote Precinct – a voting district (geographic area) Ballot – list of candidates on which you vote Returns – counting of ballots Exit Poll – sample of voters and how they voted

4 Primary Election – an election in which the political parties choose candidate for office to compete in the general election. Direct Primary – election in which voters choose candidates for political part in general election. – Closed Primary – only registered members of political party can vote. – Open Primary – choose party, can only vote in one, do not have to be a registered member. Plurality – most votes among those running wins. Run-Off Primary – if majority is necessary, top (2) have a run-off Petition – unaffiliated candidates must get on ballot by petition. Types of Elections 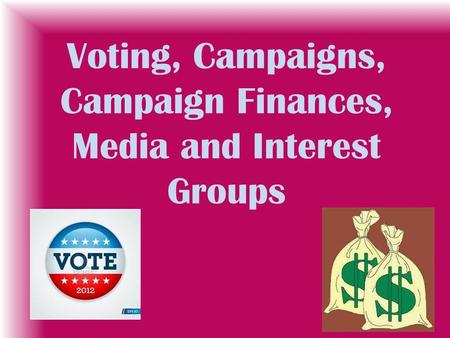