Presentation on theme: "Interactions in the Environment © Lisa Michalek. POPULATIONS & COMMUNITIES  POPULATION –All the organisms of one species that live in one place at a."— Presentation transcript:

1 Interactions in the Environment © Lisa Michalek

2 POPULATIONS & COMMUNITIES  POPULATION –All the organisms of one species that live in one place at a particular time. –No population ever lives alone.  COMMUNITY –All the populations that interact with each other in a particular place. –The amount of variety in a community is called species diversity or BIODIVERSITY.  few species = low biodiversity  many species = high biodiversity

6 In food relationships, nutrients (food) are transferred from one organism to another.

7 Nutritionally, Organisms are either:  Autotrophs –Can make their own food from inorganic compounds. –Also called PRODUCERS. –Example: Green Plants

8  Heterotrophs –Cannot make their own food. –Also called CONSUMERS. –Must obtain their nutrients from the environment. –They are classified according to the type of food they eat. Nutritionally, Organisms are either:

11 OMNIVORES  Animals that feed on both plants and animals.  Example: Humans

14 MUTUALISM  A relationship in which both organisms benefit. –nitrogen-fixing bacteria  A type of bacteria that lives in little knobs on the roots of peas and clover plants.  These bacteria make important nitrogen compounds that are used by the plant and the plant supplies moisture and organic nutrients to the bacteria.

15 COMMENSALISM  Two organisms of different species live in a relationship that is beneficial to one and the other is not affected. –The remora (little fish) attaches itself to the shark’s body with little suction cups. –The remora gets scraps of uneaten food from the shark, the shark is not harmed by the relationship.

17 COMPETITION  Competition occurs when there is a struggle among organisms living in the same habitat (environment) for the same limited resources.  Some of these resources are food, space, water, light, oxygen, and minerals.  When two species compete intensely for the same resource, one species usually wins.  Competition may result in the elimination of one species in the ecosystem.  Competing species tend to reduce their use of common resources.

19 FOOD CHAINS  Food passes through an ecosystem in a certain path known as Food Chain.  Food chains involve the transfer of food materials from producer to primary consumer to secondary consumer to tertiary consumer.  Each level on a food chain is a Tropic Level.

20  Producer – green plants and other photosynthetic organisms. Producers change the energy of sunlight into the chemical energy of food.  Primary Consumer – are always herbivores because they are the animals that eat green plants.  Secondary Consumers – are animals that eat other animals (carnivores). These include predators and scavengers.  Higher-Level Consumers – are organisms that eat secondary consumers.  Decomposers – break down all organisms into chemical materials that are returned to the environment for use by other living organisms. Tropic Levels

23 PYRAMID OF ENERGY  At each step on the food web, energy is transferred to the next higher level.  Energy is “lost” at each food level, because much of the food energy taken in by a consumer is used in the process of metabolism.  Less energy is available to the higher levels on the food chain.

27 MATERIAL CYCLES  In a self-supporting ecosystem, materials must be recycled between the living and nonliving environment so they can be reused.  There are three major material cycles. –The Carbon-Oxygen Cycle –The Water Cycle –The Nitrogen Cycle

30  Nitrogenous wastes and the remains of dead organisms are converted by decomposers and soil bacteria into compounds that can be used by autotrophs (producers). NITROGEN CYCLE

32 SUCCESSION  Primary Succession –Occurs in an area that has no existing life. –Must begin with the formation of soil. –Example: a bare rock, rocky cliffs, sand dunes, newly formed volcanic island, newly exposed land areas.  Secondary Succession –Occurs in an area where an existing community has been partially destroyed and its balance is upset. –Example: Forest Fire, Tornado, Hurricane

36 CLIMAX COMMUNITIES  If environmental conditions in an ecosystem remain stable over long periods of time, the same species of plants and animals that make up that ecosystem continue to live and interact together.  These permanent plant and animal species make up a stable or climax community.  There is a balance within the population and the environment.  A Climax Community remains until a drastic environmental change occurs. –Storm, Forest Fire, Flood, Volcanic Eruption  The type of climax community is determined by the abiotic factors of the area.

Download ppt "Interactions in the Environment © Lisa Michalek. POPULATIONS & COMMUNITIES  POPULATION –All the organisms of one species that live in one place at a." 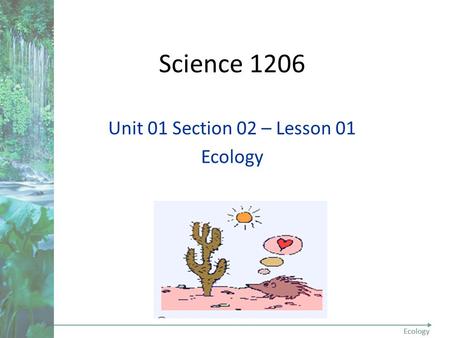 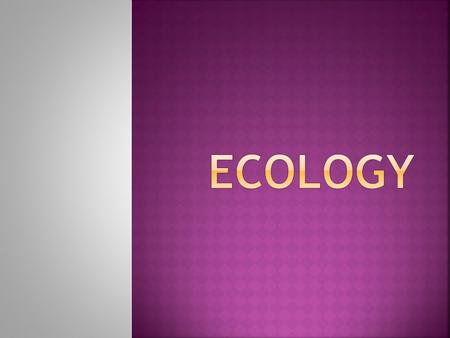