2 Think about it…. If Wile E. Coyote and a boulder fall off a cliff at the same time, which do you think will hit the ground first? Would it matter if the cliff were very high or particularly low? How could Mr. Coyote slow down his fall?

4 Acceleration Due to Gravity

7 Air Resistance and Falling Objects
Demo1: Which falls faster? Crumpled paper or flat sheet of paper? Why did this happen?

10 Free Fall Occurs When There Is No Air Resistance
An object is in free fall only if gravity is pulling it down and no other forces are acting on it. What are the 2 places that have no air and free is possible? Vacuum and space

11 Orbiting Objects are in Free Fall
Two Motions Combine to Cause Orbiting A space shuttle moves forward at a constant speed and it is in constant free fall towards the earth causing orbiting The unbalanced force that causes objects to move in a circular path is centripetal force (ex. Moon orbiting the earth, earth around sun.)

12 Why does the shuttle not fall to earth if gravity is pulling down on it?
Because it is traveling forward What would happen if the shuttle started moving much faster or slower? Faster – out of orbit Slower – fall towards earth

13 Projectile Motion and Gravity
Projectile Motion- the curved path that an object follows when thrown, launched, or otherwise projected near the surface of earth. Horizontal Motion - When you throw a ball, the forward force your hand exerts on the ball Vertical Motion- Pulled down towards the earth by gravity

14 Newton’s Laws of Motion
Newton’s First Law of Motion An object at rest remains at rest, and an object in motion remains in motion at constant speed and in a straight line unless acted on by an unbalanced force. What does this mean? This means that there is a natural tendency of objects to keep on doing what they're doing. All objects resist changes in their state of motion. In the absence of an unbalanced force, an object in motion will maintain this state of motion.

16 Newton’s first law of motion
Newton’s 1st Law is also the reason you wear a seatbelt! Newton’s 1st Law is also known as inertia Inertia – the tendency of an object to resist being moved, or if the object is moving to resist a change in speed or direction until an outside force acts on it Does mass have an affect on inertia? Would you rather catch a baseball or bowling ball? Yes mass has an affect on inertia

17 Newton’s Second Law of Motion
Acceleration is produced when a force acts on a mass. The greater the mass of the object being accelerated the greater the amount of force needed to accelerate the object. What does this mean? Everyone knows the Second Law. The heavier objects require more force to move the same distance as lighter objects

18 Newton’s 2nd Law of Motion
The 2nd Law gives us an exact relationship between force, mass, and acceleration. It can be expressed as a mathematical equation: or FORCE = MASS times ACCELERATION SI Unit for force = Newtons (N)

19 Newton’s 2nd law of motion
Mike's car, which weighs 1,000 kg, is out of gas. Mike is trying to push the car to a gas station, and he makes the car go m/s2. Using Newton's Second Law, you can compute how much force Mike is applying to the car.

21 Newton’s third law For every action there is an equal and opposite re-action. What does this mean? This means that for every force there is a reaction force that is equal in size, but opposite in direction. That is to say that whenever an object pushes another object it gets pushed back in the opposite direction equally hard

22 Newton’s third law Let's study how a rocket works to understand Newton's 3rd Law. The rocket's action is to push down on the ground with the force of its powerful engines, and the reaction is that the ground pushes the rocket upwards with an equal force. Newton’s Cradle

23 Momentum Momentum - Depends on the object’s mass and velocity. The more momentum an object has, the harder it is to stop the object or change directions. What would have more momentum? A bowling ball or a basketball rolled at the same velocity? Bowling ball b/c it has more mass A tractor trailer or a Honda civic at the same velocity? Tractor trailer

26 law of conservation of momentum
Any time objects collide, the total amount of momentum stays the same. This is true for all collisions if no other forces act on the colliding objects Conservation of Momentum can be explained by Newton’s third law of motion. 5 Reaction Force Action Force 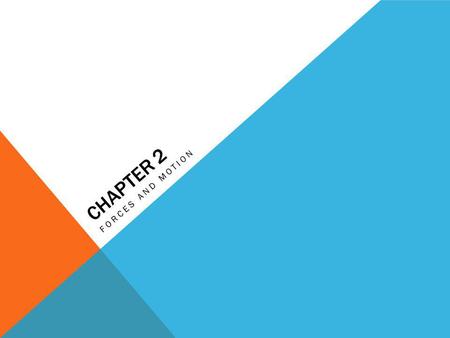 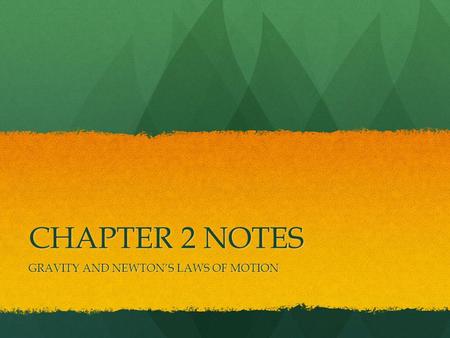 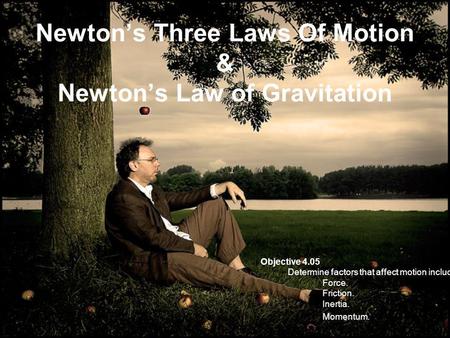 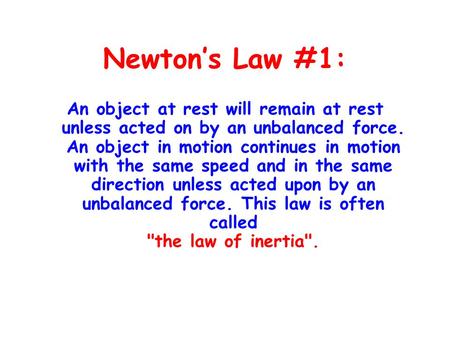 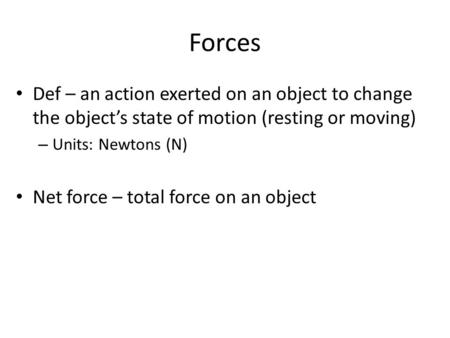 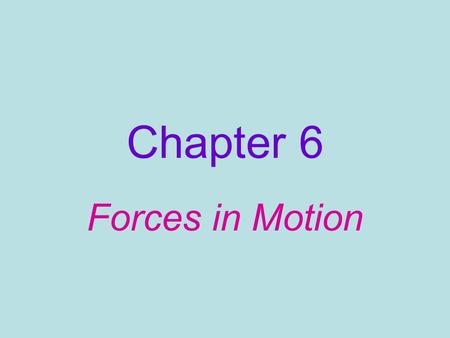 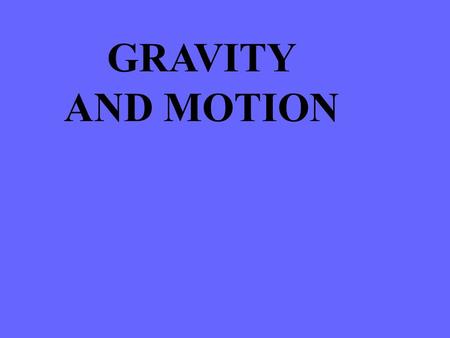 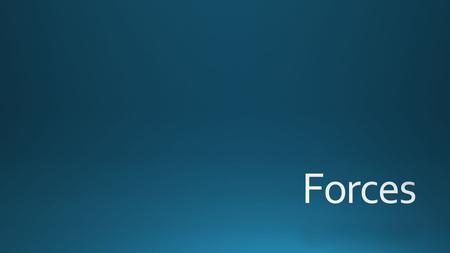