Presentation on theme: "Literary Terms. Setting Time and place in which action is set."— Presentation transcript:

2 Setting Time and place in which action is set

3 Conflict Problem or struggle in the story Man vs. Man Man vs. Self Man vs. Society Man vs. Nature Man vs. Supernatural

4 Point of View The vantage point from which the story is told. 1 st 3 rd limited 3 rd omniscient

5 Round Character Character with is given multiple sides; complex

6 Dynamic Character Dynamic characters that experience changes throughout the plot of a story. Although the change may be sudden, it is expected based on the story’s events.

7 Static Character Static characters that do not experience basic character changes during the course of the story.

8 Flat Character Character which has only one dimension

11 Mood The feeling the text arouses in the reader

12 Foreshadowing Author gives hints or clues of what is to come later.

14 Imagery The use of sensory words to create a certain picture in the reader’s mind.

15 Irony The three different types of irony are: Dramatic- reader or audience sees the character’s mistakes Verbal- the writer says one thing and means another Situational- great difference between the purpose of an action and its outcome.

17 Juxtaposition Putting two elements side by side for comparison or contrast (characters, settings)

19 Symbol Something concrete that stands for something abstract.

20 Theme the central topic, subject, or concept the author is trying to point out

21 Tone Overall feeling created by the writer. (tone is used to create mood)

23 Exposition Writing that is intended to explain something that might otherwise be difficult to understand.

27 Repetition The act or process or an instance of repeating or being repeated. 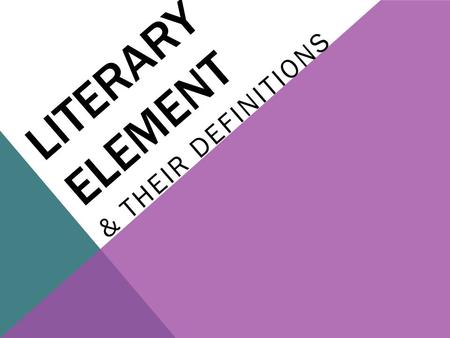