Presentation on theme: "Money. Why is English Money Called a Pound? During the Middle Ages, most people in Europe used silver coins. The English used silver pennies; each weighed."— Presentation transcript:

2 Why is English Money Called a Pound? During the Middle Ages, most people in Europe used silver coins. The English used silver pennies; each weighed 1/240 of a pound, and was called a sterling. The basic unit of money in England became the pound of silver, which was equal to 240 sterlings. So this unit was and still is called the pound sterling

3 Why was the Italian Money Called a Lira? Libra means Scales or Pound in Latin Zodiac sign Libra holds scales Why is the Japanese Money Called Yen? from Chinese word "Yuan" - a round object

4 Why is the European Union Money Called the Euro? Derived from Europe. This name was the winning choice in a contest in 1996, and was invented by a group of scholars in Spain.

5 Why is American Money called a Dollar? During the 16th century, silver coins made in St. Joachimstal, a town in Bohemia – a part of the Czech Republic – were thought to contain the purest silver. This prized coin became known as the Joachimsthaler, a word that was shortened to thaler (pronounced taler, long a).

6 In some places in Europe, the word became daler. This was the name of certain Spanish coins that were used in America before the Revolution. In 1785, when the United States Congress decided to start issuing money, they chose that word, now spelled dollar, for the unit of currency. They would never have agreed on the pound since they just gained independence.

7 What is money? Money is anything that serves as a medium of exchange, standard of measure (unit of account), and a store of value.

8 Three Uses of Money Money as a Medium of Exchange (convenience) –A medium of exchange is anything that is used to determine value during the exchange of goods and services. Ex: John buys books, food, etc. Money as a Standard of Measure (consistency) –A standard of measure is a means for comparing the values of goods and services. Ex: price of a candy bar is $1, the price of a book is $14 Money as a Store of Value (longevity) –A store of value is something that keeps its value if it is stored rather than used. Ex: Save money instead of buy a $100 ski jacket

10 Six Characteristics of Money / Currency The coins and paper bills used as money in a society are called currency. A currency must meet the following characteristics:

11 Durability –Objects used as money must withstand physical wear and tear. Portability –People need to be able to take money with them as they go about their business. Divisibility –To be useful, money must be easily divided into smaller denominations, or units of value.

12 Uniformity –Any two units of money must be uniform, that is, the same, in terms of what they will buy. Limited Supply –Money must be available only in limited quantities. Acceptability –Everyone must be able to exchange the money for goods and services.

13 The Sources of Money’s Value Commodity money consists of objects that have value in themselves. Representative money has value because the holder can exchange it for something else of value. So called because it represents a specific amount of a specific commodity Fiat money, also called “legal tender,” has value because the government decreed that is an acceptable means to pay debts. So called because fiat in Latin means “let it be so.”

14 Federal Reserve System Nation’s first true central bank, or bank that can lend to other banks in time of need Organization of Federal Reserve –Member Banks – 12 regional banks – all nationally chartered banks were required to belong to the Fed when it began in 1913 – they store cash reserves in the district banks –Federal Reserve Board – all member banks are supervised by the board – make monetary policy

15 Short-term loans – each of the regional Federal Reserve Banks allowed member banks to borrow money to meet short- term demands – helps prevent panics Federal Reserve Notes – national currency we use today in the US – allows the Federal Reserve to increase and decrease the amount of money in circulation according to business needs. More on the Feds to come later!!!

17 History of American Banking Federalists believed the country needed a strong central government to establish economic and social order. Alexander Hamilton was in favor of a national bank which could issue a single currency, handle federal funds, and monitor other banks.

18 Anti-federalists were against a strong central government and favored leaving powers in the hands of the states. Thomas Jefferson opposed the creation of a national bank, and instead favored banks created and monitored by individual states.

19 Savings and Loan Crisis Deregulation – savings and loans were unprepared for competition after deregulation High Interest rates – during the 1970’s long term longs were made a low rates, 1980’s interest rates skyrocketed and S&L’s had to pay higher rates to attract money – income from lower interest loans were not meeting obligations

20 Bad Loans – risky loans forced many S&L’s out of business Fraud – some institutions made large loans to businesses that had little chance of succeeding. When the businesses failed it strained the reserves of the FSLIC –You are still paying for the interest on those loan defaults of the 1980’s – in the national debt

Download ppt "Money. Why is English Money Called a Pound? During the Middle Ages, most people in Europe used silver coins. The English used silver pennies; each weighed." 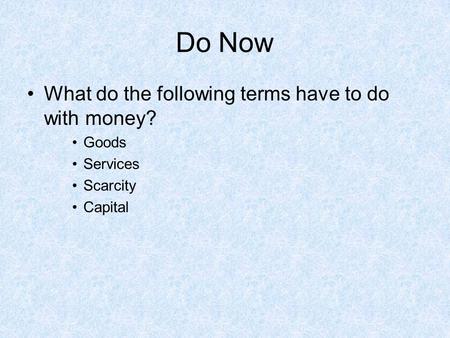 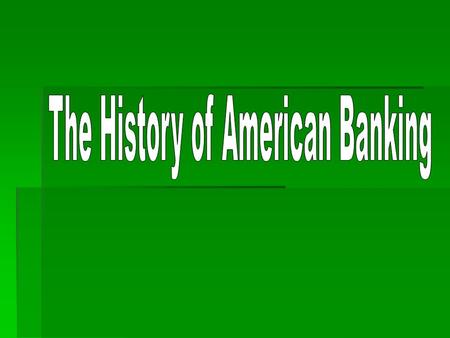 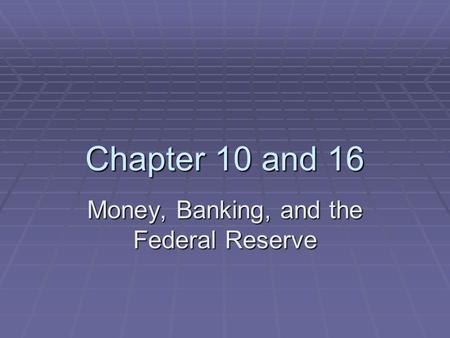 Money, Banking, and the Federal Reserve