Presentation on theme: "Energy Resources. Renewable Resource A natural resource that can be replaced in nature almost as."— Presentation transcript:

2 http://mathinscience.info2 Renewable Resource A natural resource that can be replaced in nature almost as quickly as it is used Examples: water, wind energy, solar energy

3 http://mathinscience.info3 Nonrenewable Resource A natural resource that cannot be replaced by natural processes as quickly as it is used Examples: fossil fuels, such as coal, oil, and natural gas

4 http://mathinscience.info4 Solar Energy Energy from the sun Major source of energy for most of Earth’s processes such as photosynthesis

5 http://mathinscience.info5 Photosynthesis Occurs in green plants, seaweeds, algae, and certain bacteria Plants use energy from the sun to convert carbon dioxide and water into glucose, a simple sugar used as food for energy. A byproduct is oxygen which is needed by humans and animals Ancient products of photosynthesis known as fossil fuels supply most of our modern industrial energy http://encarta.msn.com/encnet/refpages

6 http://mathinscience.info6 Fossil Fuels Nonrenewable energy resources, such as coal, oil, and natural gas that are formed from the decayed remains of ancient plants and animals Concentrated forms of the sun’s energy Burned to release their chemical energy

7 http://mathinscience.info7 Coal A solid fossil fuel that is found in mines underground Formed over time by animal and plant remains that have been exposed to high temperature and pressure Burned to produce steam to run generators

9 http://mathinscience.info9 Natural Gas Produced when compounds rise to the top of the crude oil deposits and are trapped Composed mainly of methane, but also contains propane, and butane Used in heating systems, stoves, ovens, and vehicles as an alternative to gasoline Cleanest burning fossil fuel

11 http://mathinscience.info11 Problem and Possible Solution Problem: Since fossil fuels cannot be replaced, large deposits will eventually be exhausted. Because of this and the need to reduce the risk of global warming, the world’s energy sources will need to shift away from reliance on fossil fuels. Possible solution: Solar energy is one renewable resource that can be explored.

Download ppt "Energy Resources. Renewable Resource A natural resource that can be replaced in nature almost as." 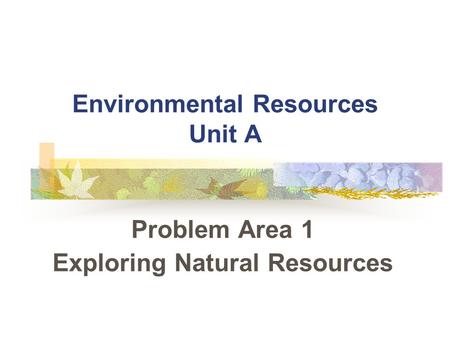 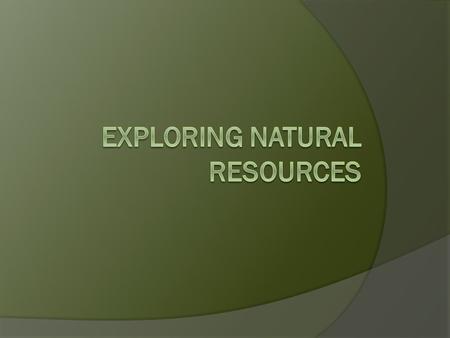 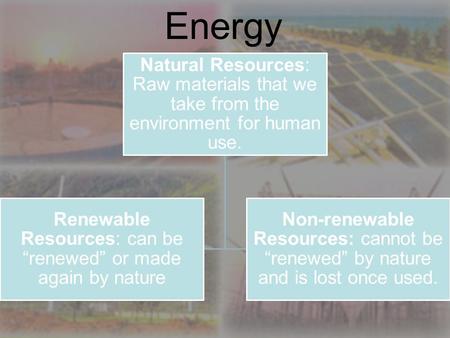 Natural Resources: Raw materials that we take from the environment for human use. Renewable Resources: can be “renewed” or made again by nature Non-renewable. 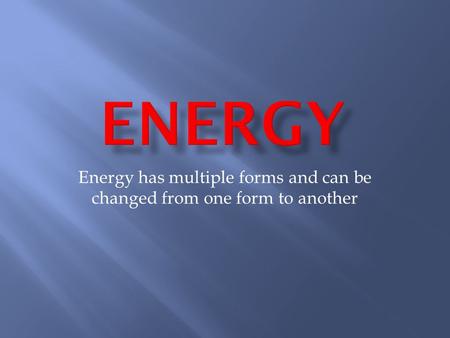 Energy has multiple forms and can be changed from one form to another.