10 II. UNCTAD project on the TF implementation Plans
Methodology (1) Fact finding mission by UNCTAD and/or Annex D and the official launch of the project during a special meeting of the national TF committee Collection of information by the national consultant through individual interviews with the TF stakeholders and desk-research Preparation of the draft implementation plan by the national consultant and UNCTAD National validation conference with the support and participation of UNCTAD/Annex D Implementation plan on TF measures currently considered in WTO

11 II. UNCTAD project on the TF implementation Plans
Methodology (2) Questionnaire – Part A For each measure, Text of current draft consolidation negotiation text (from Rev.11 to 13) Some background information, for example, from the '2008 Self Assessment of Trade Facilitation Needs and Priorities‘

13 II. UNCTAD project on the TF implementation Plans
Methodology (4) Two-three day meeting combining plenary sessions and work in groups Analysis and validation of the conclusions on: Current status of implementation of each of the 39 trade facilitation measures under the current draft TFA; Action plans for the non- or partially implemented measures and needs for resources and TACB Implementation priority and category for each measure. National Validation Conference

18 II. UNCTAD project on the TF implementation Plans
Progress and results (4) Lessons learned The strong commitment from the country is a must A WTO Needs Assessment - a good basis but not always enough Positive impact of using national consultants Need for regular feedback and advisory on all stages Need for training/information session before the validation Need for flexibility on behalf of both UNCTAD and the countries Ensuring sustainability means continuous support for the TF committees

22 Activities: 4-5 regional TF Forums
A. Follow up to the national implementation plans: regional component Activities: 4-5 regional TF Forums Logistics: To be organized in 2013 in EAC, in Western Africa, in Latin America, South Asia and in the Caribbean (TBC). Invitation of two/three experts per country and international experts Organizational costs to be covered by UNCTAD Content: Selection of 5-10 measures requiring regional cooperation Presentation of best TF practices and lessons learned Presentation of challenges for TF identified, specially in connection with the regional initiatives and projects

23 Activities: Inter-Regional TF Forum
A. Follow up to the national implementation plans: inter-regional component Activities: Inter-Regional TF Forum Logistics: To be organized in the second quarter of 2014 in Geneva Countries from Africa and Asia (UNDA project) Invitation of two/three experts per country Organizational costs to be covered by UNCTAD Content: Presentation of best TF practices and lessons learned Enhancing South South cooperation

24 B. UNCTAD Study on National TF Committee
UNCTAD long-standing support to the establishment of the national TF committees (NGTF) in developing countries: from a recommendation to a possible legal obligation in WTO UNCTAD approach: Analyze best practices for setting up and operating a NTFC UNCTAD TF Handbook Part I UNCTAD Technical Note 18 UNCTAD online repository of national cases throughout the world 2013: An in-depth study of the NTFC together with the United Nations Economic Commission for Europe (ongoing)  Possible intergovernmental meeting in 2013 on the NTFC 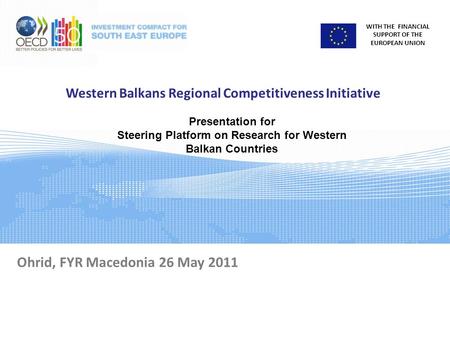 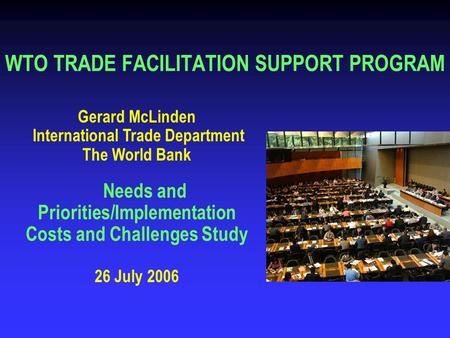 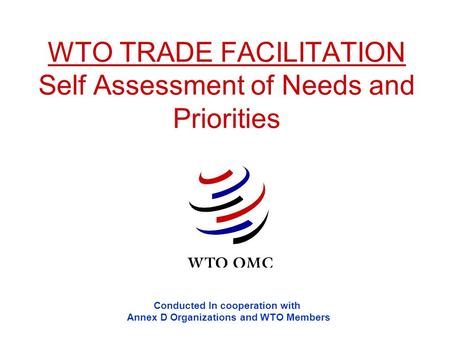 WTO TRADE FACILITATION Self Assessment of Needs and Priorities Conducted In cooperation with Annex D Organizations and WTO Members. 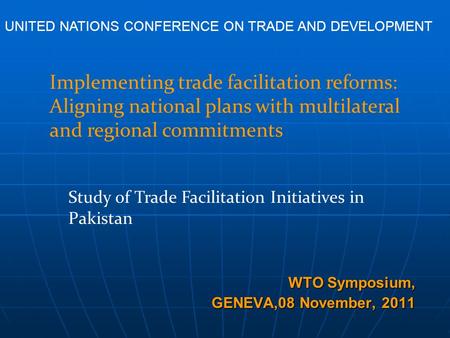 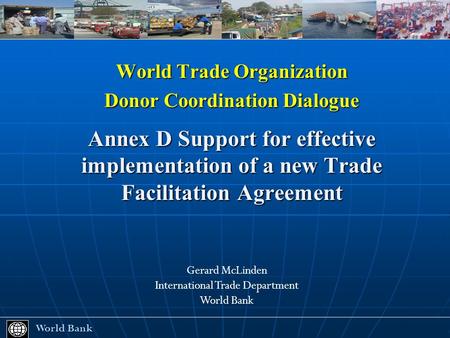 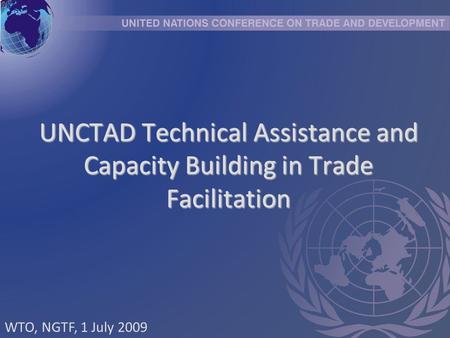 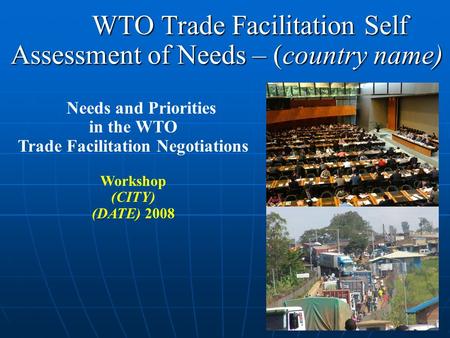 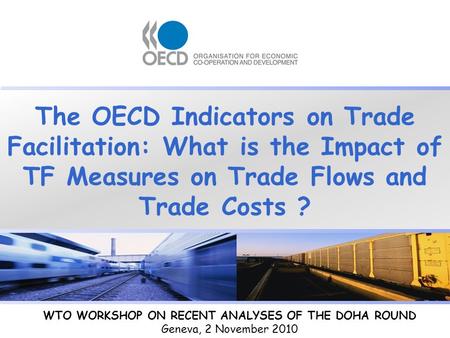 The OECD Indicators on Trade Facilitation: What is the Impact of TF Measures on Trade Flows and Trade Costs ? WTO WORKSHOP ON RECENT ANALYSES OF THE DOHA. 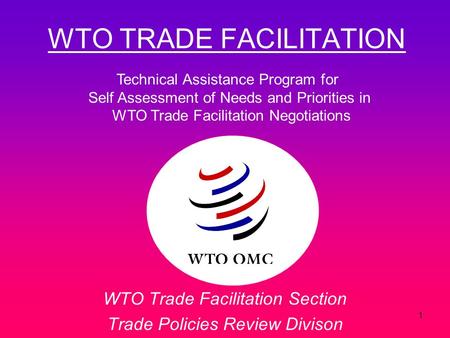 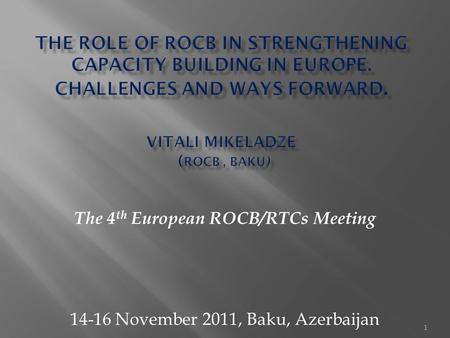 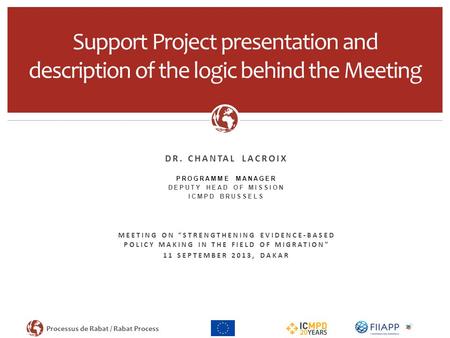 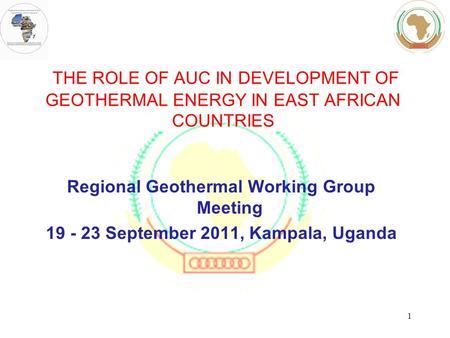 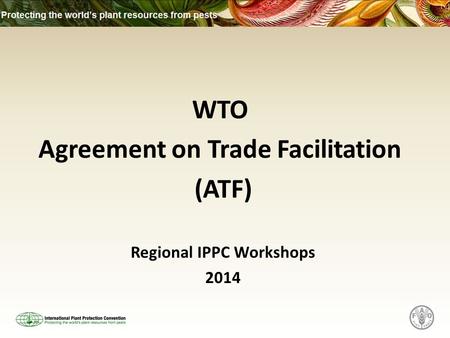 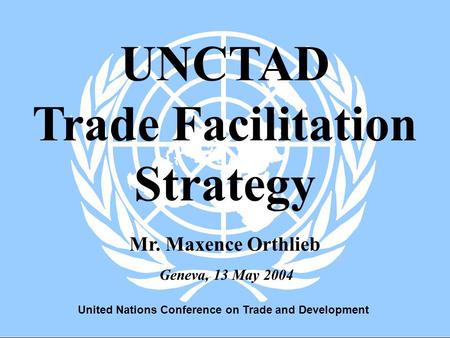