Presentation on theme: "Types of Interactions Ecology: A study of the relationship between living things and the environment."— Presentation transcript:

3 Ecology: A study of the relationship between living things and the environment.

5 POPULATION: Groups individuals who tend to mate with each other in a limited geographic area.

6 Community: The relationships between groups of populations.

7 Biome: A regional ecosystem characterized by distinct types of vegetation and animals. Determined by temperature and rainfall.

8 Biosphere: The part of the earth and its atmosphere in which living organisms exist.

9 The surface of the earth and all the ecosystems.

10 Lithosphere: Below the surface, in the crust and mantle.

11 Hydrosphere: All waters not in atmosphere and lithosphere.

12 Ecosystem: The relationships of populations with each other and their environment.

13 Habitat: The type of environment in which an organism lives.

14 Limiting Factors & Carrying Capacity Population grow is controlled by limiting factors these are scarce resources Ex: food, water, and living space Any resource can become a limiting factor to a population (i.e. too many animals = too little food) Nature is varied- everything in the environment affects every other thing.

15 Limiting factors cause death in populations when they’ve get bigger than their carrying capacity -the largest number the environment can support.

17 Interactions Between Organisms Populations are contained to one species while communities are interactions between multiple species. All these species within a community are going to interact in some way. These are the main ways species and individuals can affect each other. COMPETITION PREDATOR and PREY S YMBIOTICRELATIONSHIPS

18 Competition When 2 or more individuals or populations try to use the same resources (EX: food, water, shelter, space, sunlight) Resources are limited, so when one animal uses them, others can’t. Competition can happen between animals within a population and between different populations. (EX: Elk compete for same plants to eat; different plant species in a forest all want the same sunlight)

20 Producers Plants are living organisms. They need nourishment to survive. But… Plants do not eat other plants or animals. Plants are called producers, because they make their own food inside themselves.

21 Consumers “Consume” means “eat”. Animals are consumers because they “eat” (consume) food provided by plants or other animals.

22 Herbivores Some animals do not eat other animals. They survive on plants and are known as “herbivores”.

23 Carnivores Some animals, like the kingfisher, eat only other animals. These animals are called “carnivores”.

24 Omnivores Some animals, like us, eat both plants and animals. These animals are called “omnivores”.

25 Predators & Prey Interaction where one organism eats another: prey is organism eaten; predator is the organism doing the eating Predators adapt in order to catch prey (EX: cheetahs run fast; goldenrod spider blend in with flower) Prey adapt in order to avoid predator – Defensive chemicals can make the prey unattractive or even poison (deadly) – Will have warning colors that say “stay away”, such as red, yellow, orange – Outrun the predator or travel in groups (schools of fish, herds of buffaloes) – Blend in with background by either sitting still or mimicking something non-living- this is known as camouflage

28 Prey Any animal which is hunted and killed by another animal for food is prey. Predator Prey

30 Parasitism: One organism benefits while the other is harmed.

33 Commensalism: One organism benefits while the other doesn’t benefit, or suffer harm.

34 The remora just hitches a ride to grab some scraps after the kill. Examples of Commensalism

Download ppt "Types of Interactions Ecology: A study of the relationship between living things and the environment." 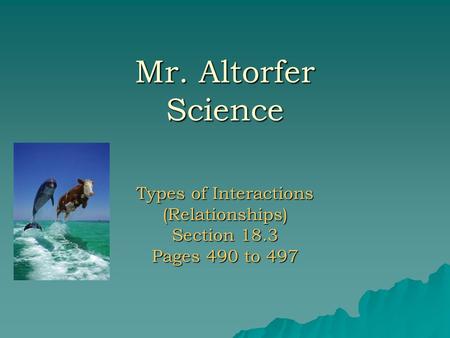 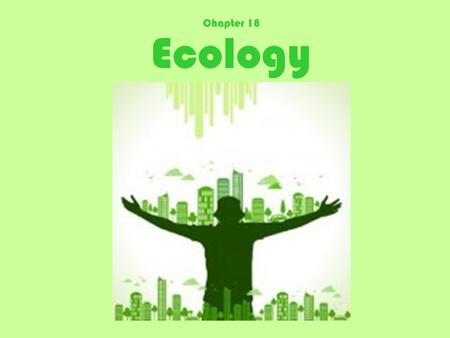 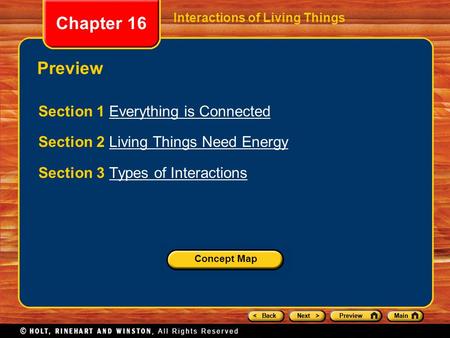 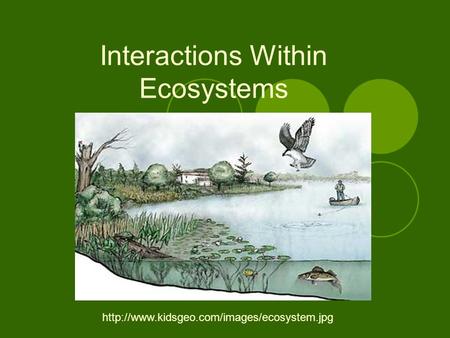 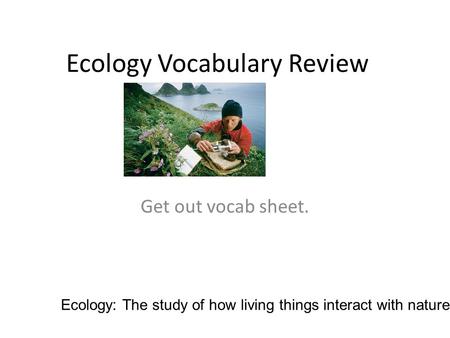 Ecology Vocabulary Review Get out vocab sheet. Ecology: The study of how living things interact with nature. 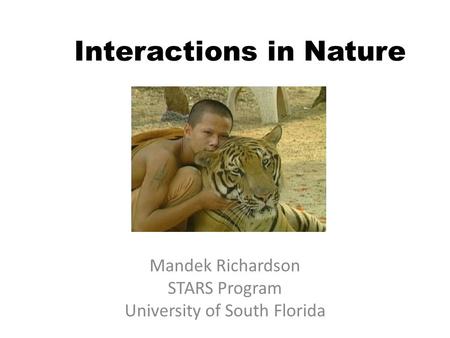