2 Frida Kahlo was born Magdalena Carmen Frida Kahlo y Calderon in Mexico city, Mexico. She is considered one of Mexico’s greatest artists, and she was married to another of Mexico’s premier artists, Diego Rivera. Kahlo’s life experiences shaped her art, and she started painting while recuperating after suffering horrendous injuries in a bus accident.

3 On September 17, 1925, Kahlo and her then boyfriend, Gomez Arias, were on a bus together when their bus collided with a streetcar. A steel handrail went into her hip and went right through her body, coming out the other side. After being hospitalized for several weeks, Frida went home to recuperate. It was during this period of recuperation that she started painting to occupy her time while she was flat on her back in bed.

4 Frida Kahlo married Diego Rivera in 1929, and he encouraged her to continue painting.

5 Kahlo and Rivera moved around a lot as Rivera received commissions to paint murals. They lived in San Francisco, New York City, and Detroit. Kahlo continued her painting, and she showed her work in various art shows. Kahlo’s art incorporated both graphic and surrealistic elements, and she used her art as an outlet to express whatever joy or pain was going on in her life at the time.

6 Frida Kahlo and Diego Rivera had a difficult marriage, and Kahlo also suffered at least two miscarriages, and she never was able to have children, even though she badly wanted to do so. All of the events and yearnings of her life became subjects for her artwork, and she painted numerous self-portraits.

7 Toward the end of her life, in the late 1940’s and early 1950’s, Kahlo endured many operations to try to fix her spine which had been so badly injured in the bus accident when she was a teen. She lived in chronic pain, and she sought many treatments to try to relieve it.

8 In 1953 Kahlo received a solo exhibition of her paintings in Mexico, which gave her great joy. However, she attended the opening after arriving by ambulance due to her worsening health. Part of her right leg had to be amputated due to gangrene, and she became severely depressed. She died in 1954, shortly after her 47th birthday.

9 Frida Kahlo’s fame grew along with the feminist movement in the 1970’s, and she is now one of Mexico’s best-known artists. 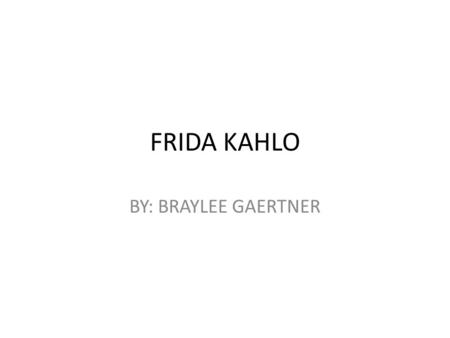 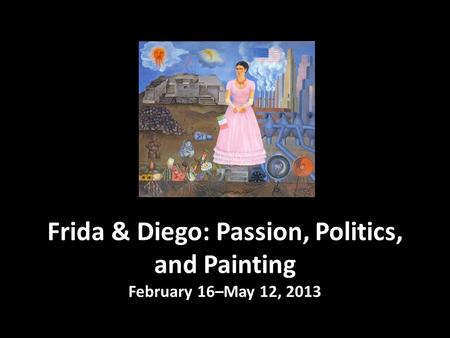