Presentation on theme: "We have a tendency to rely on intuition. We often overestimate our ability to use our intellect to make judgments, detect lies, remember events, etc."— Presentation transcript:

2 We have a tendency to rely on intuition. We often overestimate our ability to use our intellect to make judgments, detect lies, remember events, etc. Hindsight Bias: the tendency to believe, after learning an outcome, that one would have foreseen it. The I- knew-it-all-along phenomenon. Overconfidence: we overestimate our ability to solve a problem or predict an outcome These are good reasons for psychology to exist. Psychology helps to eliminate these issues.

3 Curiosity: the overwhelming need to know; why, what and how. The desire to ask questions Skepticism: being willing to question any truth, to doubt, to seek for and ask for clarity, to seek consistency in logic and to seek evidence Humility: to be willing to accept that we all err and to be open to new perspectives These three components are critical to the development of science in general and psychology.

4 1) theory: an explanation using an integrated set of principles that organizes observations and predicts behaviors or events Leads to 2) hypotheses: a testable prediction often implied or suggested by a theory—a statement of the relationship between or among variables Leads to 3) research and observation: test, observe to confirm, reject or revise a theory

5 Research can be biased. Having a theory often leads a researcher to bias subjective observations. To prevent or check biases, psychologists use operational definitions--- a statement of the procedures(operations) used to define research variables. Use of operational definitions allows for research to be replicated. If the results of a replicated study are similar it supports the reliability of the results.

6 Objective and systematic observation and description The Case Study---an observation technique in which one person is observed in depth in the hope of revealing universal principles Example—Nim Chimpsky– a case study involving language acquisition, using chimpanzees Broca’s patient TAN—he could only say the word tan, upon his death his brain was examined to determine where the damaged area was, hypothesizing that the damaged area was where our ability to speak lies Case studies can suggest ideas for further study. However, to discern general truths that cover individual cases, we must answer questions with other research methods

7 Surveys are used to gain a large amount of information. Researchers can look at many cases in less depth, to ascertain knowledge about the whole population. Survey—a technique for ascertaining the self-reported attitudes or behaviors of a particular group, usually be questioning a representative, random sample of the group Wording effects—changes in the wording of a question can have a major impact. Because wording is very important, researchers must reflect on how the wording might impact people’s expressed opinion

9 Opportunity Sampling: using whoever is present and agrees to participate. Pro: convenient Con: bias Sampling Bias: bias within your sample prohibits the results from being accurate to the whole population— problematic to generalize from studies that use opportunity samples Self-selected Sample: use of volunteers—Pro: easy to obtain a sample, highly motivated sample Con: rarely reflect the general population, difficult to make generalizations

10 Snowball sampling: when participants recruit other participants Pro: can help access participants when otherwise it might be difficult Con: not random Participant variability: the extent to which the participants share a common set of traits that can bias the outcome of the study. Stratified sample: the researcher may try to avoid selection bias by using a stratified sample. It draws random samples from each subpopulation within the target population

Download ppt "We have a tendency to rely on intuition. We often overestimate our ability to use our intellect to make judgments, detect lies, remember events, etc." 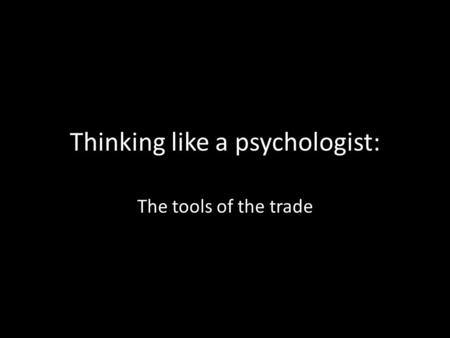 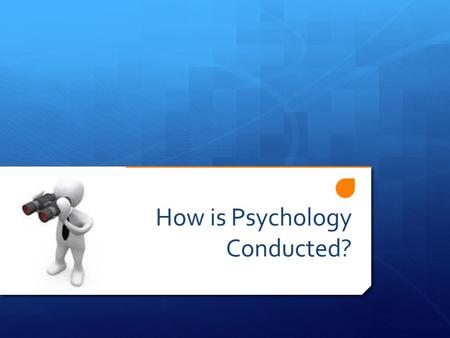