3 INDIAN REMOVAL ACT Congress, with President Andrew Jackson’s support, passed the Indian Removal Act in 1830 Under this law, the federal government funded treaties that forced tribes west The Cherokee Tribe in Georgia refused and were supported by the Supreme Court. Jackson refused to abide by the Court decision. Jackson said, “John Marshall (Supreme Court Chief Justice) has made his decision, now let him enforce it.” Trail of Tears followed the Court ruling as U.S. troops rounded up the Cherokee and drove them west, mostly on foot. . .thousands died.

5 Plains Way of Life American Indians of the Great Plains followed a way of life centered on the horse and buffalo. Buffalo provided food, clothing, shelter, and other essentials. These American Indians lived in family groups or large clans. The leaders of a tribe ruled by counsel rather than force.

7 From Peace to Conflict In 1834, the federal government had passed and act that set aside the entire Great Plains as one enormous reservation for the Plains Indians. The time between then and the Civil War was relatively peaceful for the Plains American Indians. After the Civil War, the Plains attracted tens of thousands of white settlers who wanted to own land. Many went to Colorado to mine gold. The Homestead Act offered cheap land to farmers, attracting more than 400,000 from 1862 to 1900.

9 As more white settlers wished to move there, the government made new treaties restricting the land that American Indians could use. Conflict erupted. In 1864, a militia attacked a camp of Cheyenne, killing 200, mostly women and children. This event is known as the Sand Creek Massacre. Meanwhile the Sioux chief Red Cloud protested white settlers moving to the Black Hills, an area sacred to his people. Some Sioux signed the Treaty of Fort Laramie in 1868, but others refused. This treaty created a reservation along the Missouri River.

12 The Black Hills & The Battle of Little Bighorn
In 1874, Colonel George Armstrong Custer reported that the Black Hills held gold. A new gold rush began, and the government offered to buy the land. The Sioux refused, and the army moved in. Custer and his soldiers were all killed in the Battle of the Little Bighorn in Within months, though, the army defeated the Sioux.

14 The Dawes General Allotment Act
Assimilation is the process by which individuals from one cultural group merge, or "blend," into a second group. The Dawes Act of 1887 tried to force the assimilation of American Indians into white culture. Reservations were broken up and some of the land was given to each adult family head for farming. The policy failed because the American Indians were cheated of the best land. However, possibly more devastating to the Plains tribes was the killing of millions of buffalo on which they had depended.

17 The End In the 1880s, many Sioux turned to a ritual called the Ghost Dance, which promised to bring the buffalo back and restore Sioux lands. In 1890, a nervous army killed about 300 unarmed Sioux in the Battle of Wounded Knee or Wounded Knee Massacre bringing the Indian Wars to an end. 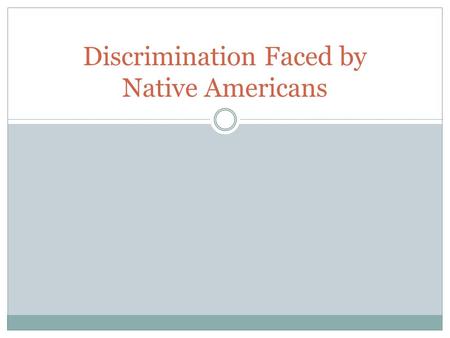 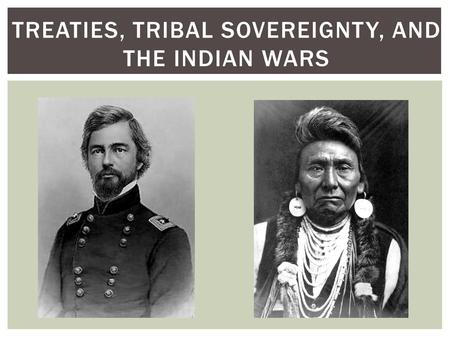 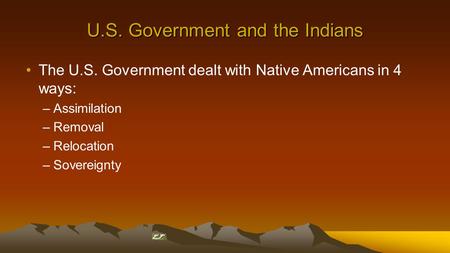 U.S. Government and the Indians