7 Ocean Currents In the Gulf Stream- warm, moist air is carried from the Gulf of Mexico to Nova Scotia and the southern parts of Newfoundland The warm North Pacific current heats the cool air passing over it, giving a mild climate to Coastal British Columbia The cold Labrador Current cools the air of Labrador and Northern Newfoundland Where the Labrador Current and Gulf Stream meet ( over the Grand Banks) the weather is often damp and foggy

12 Prevailing Winds In Canada, the prevailing winds called Westerlies, blowing from west to east. Temperature of the winds depend on if they originated from the equator or the poles

14 Effect of High Pressure on Climate and Weather
High pressure is associated with clear, sunny days Air is cool and dry 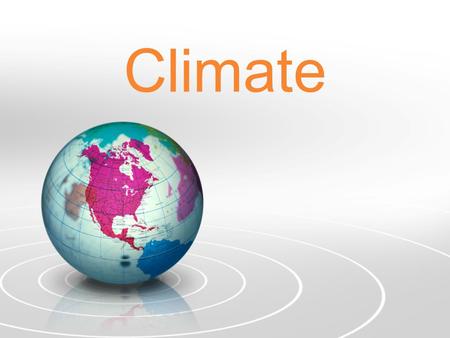 Climate. What is the difference between Climate and Weather Weather-day-to-day state of the atmosphere in a region Climate-how the atmosphere "behaves"