3 INTRODUCTION A criminal trial is the government's opportunity to argue its case, in the hope of obtaining a guilty verdict and conviction of the defendant. A trial also represents the defense's chance to refute the government's evidence, and to offer its own evidence in some cases. TRIAL PROCEDURES

4 INTRODUCTION The procedure for a trial is basically the same in every state and consists of the following phases: jury selection, opening statements, direct examination, cross-examination, closing statements, jury instruction, deliberation, verdict, and judgment. TRIAL PROCEDURES

5 JURY SELECTION Any adult U.S. citizen can be called to serve on a jury. Most courts select potential jurors from county voting lists or lists of licensed drivers. Before a trial starts, a large number of potential jurors (usually 40 to 100) are called into the courtroom. TRIAL PROCEDURES

6 JURY SELECTION From this group, the lawyers and the judges select a jury through a process called VOIR DIRE. The process varies from jurisdiction to jurisdiction, but it generally includes the following steps. The court clerk calls 12 people at random from the group and those people sit in the jury box. TRIAL PROCEDURES

7 JURY SELECTION The judge begins the voir dire by explaining a little about the case without revealing any details. Then the judge asks each potential juror to state his or her name and occupation. The judge asks other questions about the potential jurors’ lives—for example, whether they have had personal experience with cases similar to this one. TRIAL PROCEDURES

8 JURY SELECTION Ordinarily, the judge will dismiss anyone who has reason to be biased against either party. If the judge believes that the trial will last more than a few days, he or she may also dismiss people whose lives would be seriously disrupted by long jury service. The parties’ lawyers then have an opportunity to question the prospective jurors. TRIAL PROCEDURES

9 JURY SELECTION Each lawyer may issue challenges—that is, the lawyer may ask the judge to dismiss some individuals from the jury. There are two kinds of challenges—a challenge for cause and a peremptory challenge. Lawyers use both types to eliminate potential jurors who are likely to be biased. TRIAL PROCEDURES

10 JURY SELECTION CHALLENGE FOR CAUSE: A challenge for which the lawyer states a reason. If the judge agrees with the reason, he or she will dismiss the potential juror. Both attorneys can make an unlimited number of challenges for cause. TRIAL PROCEDURES

11 JURY SELECTION PEREMPTORY CHALLENGE: A challenge for which the lawyer does not give a reason. Each attorney is permitted a limited number of peremptory challenges. If a lawyer has a gut feeling that a potential juror is biased, they will often use a peremptory challenge to keep that person off the jury. TRIAL PROCEDURES

12 JURY SELECTION As each challenged individual is dismissed, they are replaced by another individual from the larger group. Once the proper number of individuals has been approved by both attorneys, those persons become the jury. If the trial is expected to be a long one, the lawyers will select one or two additional people to be alternate jurors. TRIAL PROCEDURES

13 JURY SELECTION The alternates sit with the rest of the jury throughout the trial. If a regular juror becomes unable to serve (because of illness or other reasons), an alternate can take over with no loss of trial time. Jurors are expected to respect the rules of the court. TRIAL PROCEDURES

14 JURY SELECTION In the courtroom, they must remain silent and pay close attention to the proceedings. They must never talk with the judge, lawyers, parties, or witnesses. Outside the courtroom, jurors must never discuss the case with anyone—even with other jurors. They must not investigate the case on their own either. TRIAL PROCEDURES

15 OPENING STATEMENTS The attorneys for both sides begin the trial by making opening statements. OPENING STATEMENT: An outline of the case that the attorney intends to present during the trial. The prosecutor speaks first, and because the opening statement is the first thing the jurors hear, it can have a powerful influence on them. TRIAL PROCEDURES

17 DIRECT EXAMINATION After the opening statements, each side presents its case through direct examination. DIRECT EXAMINATION: The questioning, or examination, of a witness conducted by the lawyer who calls that person to the witness stand. Depending on the case, these presentations may take anywhere from an hour to several days, weeks, or months. TRIAL PROCEDURES

18 DIRECT EXAMINATION Like the opening statement, the prosecutor makes the first presentation. The judge reminds the witness about the seriousness of the trial and the importance of being truthful. The court clerk asks the witness to take an oath to tell the truth. The lawyer then questions the witness about the facts of the case in full detail. TRIAL PROCEDURES

20 CROSS-EXAMINATION The primary purpose of cross-examination is to impeach a witness—to cast doubt on the witness’s testimony and convince the jury that the witness is unreliable. After the cross-examination, the prosecutor is permitted a redirect examination. TRIAL PROCEDURES

21 CROSS-EXAMINATION REDIRECT EXAMINATION: The questioning of a witness by the party that called the witness after that witness has been subject to cross-examination. The redirect examination is limited to issues that were discussed in the cross-examination. When both lawyers are finished questioning the first witness, the prosecutor may call other witnesses. TRIAL PROCEDURES

22 CROSS-EXAMINATION The pattern of direct examination, cross-examination, and redirect examination is repeated for each witness. There is no limit to the number of witnesses a lawyer may call. Once the prosecution has questioned all of their witnesses, they rest their case, or conclude their presentation. TRIAL PROCEDURES

24 OBJECTIONS Both attorneys must follow strict rules of evidence in making their presentations. If either lawyer appears to break a rule of evidence—for example, by asking the wrong kind of question—the other lawyer may interrupt by making an objection. An objection stops the questioning and brings the problem to the judge’s attention. TRIAL PROCEDURES

25 OBJECTIONS The objecting lawyer tells the judge what rule they think the first lawyer has broken. The attorney accused of breaking the rule has a chance to defend the question they asked. The judge then decides whether to overrule (not permit) the objection or sustain (permit) it. TRIAL PROCEDURES

28 OBJECTIONS It is each attorney’s responsibility to know the rules of evidence and make sure the other attorney follows them. If either lawyer breaks a rule of evidence, the judge may ask the lawyer to rephrase their question. More often, however, the judge will remain silent unless the other lawyer objects. TRIAL PROCEDURES

29 CLOSING STATEMENTS After both lawyers have completed their presentations, each has a chance to deliver a closing statement. CLOSING STATEMENT: An attorney’s final summary statement to the jury in a trial. Like previous court proceedings, the prosecution goes first, followed by the defense. TRIAL PROCEDURES

30 CLOSING STATEMENTS Each attorney uses the closing statement to remind the jury of the evidence that supports their side. Each lawyer also draws attention to the weak points of the opponent’s case. They may try to cast doubt on whether events could have happened the way the other side claims they did. TRIAL PROCEDURES

31 CLOSING STATEMENTS Because closing statements are the last thing the jury will hear, they tend to be more forceful and emotional than opening statements. TRIAL PROCEDURES

32 INSTRUCTING THE JURY Before a jury can decide a case, the judge must instruct the jurors. The judge begins by explaining the law that applies to the case. The judge may remind the jurors to consider only the evidence they have heard in court and to disregard any testimony that was stricken from the record. TRIAL PROCEDURES

33 INSTRUCTING THE JURY The judge then explains each party’s burden of proof—that is, what each side is responsible for proving. Generally speaking, the prosecution bears the entire burden of proof in a criminal case. An exception is when the defendant invokes an affirmative defense, thus requiring a justification of their actions. TRIAL PROCEDURES

36 DELIBERATION After listening to the judge’s instructions the jurors leave the courtroom to deliberate, or discuss the case. The jurors attempt to agree on whether the defendant is guilty or not guilty of the crime(s) charged. They select a foreman to lead the discussion and announce the verdict. TRIAL PROCEDURES

37 DELIBERATION The jurors gather in a private room called the jury room.
The bailiff stands outside the room to make sure no one disturbs the jurors and to get them anything they need. Depending on the case, the jury may deliberate for a few minutes, a few hours, or several weeks. TRIAL PROCEDURES

38 DELIBERATION There are almost no rules that tell a jury how to deliberate. Jurors may decide among themselves whether to vote orally or in writing, for example. In criminal cases, most states require that a jury reach a unanimous decision. TRIAL PROCEDURES

41 VERDICT Once the jurors have agreed on a verdict, they let the bailiff know that they are ready to announce it. VERDICT: The formal decision or finding of jury in a trial. Everyone returns to the courtroom, and the judge asks the jury foreman to deliver the verdict. TRIAL PROCEDURES

42 VERDICT Once the jurors have agreed on a verdict, they let the bailiff know that they are ready to announce it. VERDICT: The formal decision or finding of jury in a trial. Everyone returns to the courtroom, and the judge asks the jury foreman to deliver the verdict. TRIAL PROCEDURES

43 JUDGMENT The decision of the jury doesn’t take effect until the judge enters a judgment on the decision—that is, an order that it be filed in public records. In criminal cases, the judge generally has no authority to modify the verdict, thus the judgment is a restatement of the jury’s verdict. TRIAL PROCEDURES

44 JUDGMENT However, an attorney for one party may feel that the jury’s verdict does not reflect the true facts of the case. Under those circumstances, the attorney may ask the judge to disregard the jury’s decision. In some jurisdictions, the judge may grant a judgment notwithstanding the verdict. TRIAL PROCEDURES

45 JUDGMENT This type of judgment rules in favor of one side, even though the jury’s verdict originally ruled in favor of the opposing side. Once the trial is over, the only way a party can contest the judgment is to appeal to a higher court. TRIAL PROCEDURES 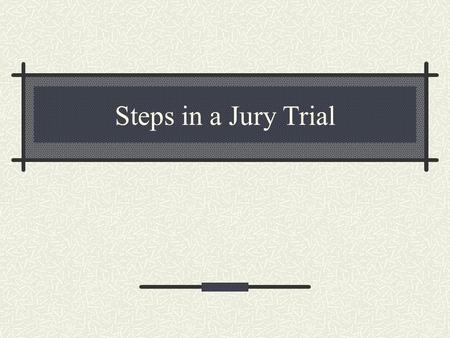 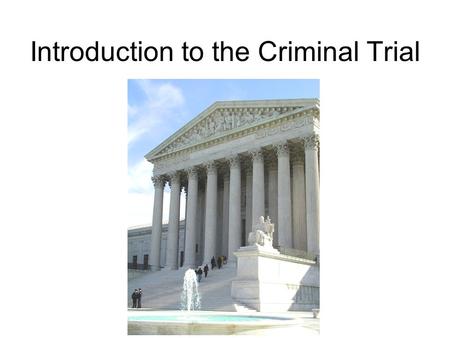