3 Can you give a brief overview of the ADAAA? ADA Update 3

4 4 Definition of Disability Three-part definition: A physical or mental impairment that substantially limits a major life activity; A record of such an impairment; or Being regarded as having a disability In the ADAAA, Congress changed the meaning of key terms used in these definitions.

5 5 Major Statutory Changes Substantially Limited in a Major Life Activity: Need not be a severe limitation or significantly restricted Major life activities include major bodily functions Ameliorative effects of mitigating measures not considered Impairments that are episodic or in remission are substantially limiting if they would be when active

6 6 Major Statutory Changes Regarded As: Concepts of substantial limitation and major life activity removed Covers anyone subjected to an action prohibited by this Act because of an actual or perceived physical or mental impairment

7 Can you give a brief history of the development of the regulations? ADA Update 7

8 8 EEOC Regulations (29 C.F.R. part 1630) Published in the Federal Register on March 25, 2011 Effective Date: May 24, 2011 Regulations closely track the statute Published along with revisions to interpretive guidance issued with the original regulations (also known as the appendix) EEOC revised only those portions of the regulations and appendix affected by the ADAAA

9 What did the regulations say about major life activities? ADA Update 9

12 12 Major Life Activities (cont.) Individual can show substantial limitation (or record of) in just one major life activity from either category Regulations say that in determining other examples of major life activities, the term major shall not be interpreted strictly to create a demanding standard for disability. Whether something is a major life activity is not determined by reference to whether it is of central importance to daily life.

13 What are the rules of construction? ADA Update 13

14 14 Substantially Limits Nine Rules of Construction [§ 1630.2(j)(1)] 1.Substantial limitation shall be construed broadly in favor of expansive coverage. 2.Impairment need not prevent or severely or significantly restrict performance of a major life activity to be considered substantially limiting. Nonetheless, not every impairment will be a disability. 3.Extensive analysis not required: Primary focus should be on a persons qualifications for a job, need for reasonable accommodation, or whether discrimination occurred.

15 15 Substantially Limits (cont.) Nine Rules of Construction [§ 1630.2(j)(1)] 4.Individualized assessment still required, but substantially limits is a lower standard than pre- ADAAA 5.Assessing ability to perform major life activity as compared to most people usually will not require scientific, medical, or statistical evidence, although presentation of such evidence is not prohibited 6. Ameliorative effects of mitigating measures (other than ordinary eyeglasses or contact lenses) shall not be considered

17 17 Sixth Rule of Construction Ordinary Eyeglasses or Contact Lenses [definition at § 1630.2(j)(6)] Shall take these into account in determining disability Definition: lenses that are intended to fully correct visual acuity or to eliminate refractive error Distinguished from low vision devices defined as devices that magnify, enhance, or otherwise augment a visual image

18 18 Sixth Rule of Construction Additional Points from Appendix on Mitigating Measures can be individual with a disability even if no limitations, or only minor limitations -- where evidence that in absence of effective mitigating measure the individuals impairment would be substantially limiting can still be individual with a disability if forgo mitigating measures, but use or non-use may be relevant to whether qualified or direct threat

19 19 Sixth Rule of Construction Additional Points from Appendix on Mitigating Measures Evidence could include limitations person experienced prior to using a mitigating measure, expected course of a particular disorder absent mitigating measures, or readily available and reliable information of other types. However, we expect that consistent with the Amendments Acts command (and the related rules of construction in the regulations) that the definition of disability should not demand extensive analysis, covered entities and courts will in many instances be able to conclude that a substantial limitation has been shown without resort to such evidence.

22 Do the regulations give any advice and examples with respect to applying these rules of construction to particular impairments? ADA Update 22

23 23 Virtually Always Types of Impairments That Will Virtually Always Be Found To Be Substantially Limiting [§ 1630.2(j)(3)(ii)] Regulations emphasize that individualized assessment still required But, for certain impairments, this individualized assessment will virtually always result in a finding of substantial limitation due to the inherent nature of these conditions AND the extensive changes Congress made to the definition of disability

25 What about conditions that are not given as examples? How do you know if they are disabilities? ADA Update 25

26 26 Condition, Manner, or Duration [§ 1630.2(j)(4)] Regulations retain these factors as concepts to consider, if relevant, in determining whether a substantial limitation exists May consider difficulty, effort, or length of time required to perform major life activity; pain; amount of time major life activity may be performed; the way an impairment affects the operation of a major bodily function

28 How has regarded as been redefined? ADA Update 28

29 29 Regarded As Having a Disability [§ 1630.2(l)] This definition of disability completely new Covers anyone subjected to an action prohibited by this Act because of an actual or perceived physical or mental impairment For example, applies to actions such as hiring, demotion, promotion, termination, discipline, annual evaluation, compensation decisions, placement on involuntary leave

30 30 Regarded as (cont.) Regarded as coverage NO LONGER requires a showing that an employer believed the impairment substantially limited a major life activity Only two elements: Employer took employment action Because of an individuals actual or perceived impairment

32 32 Regarded as (cont.) Regarded as coverage does not mean employer violated the ADA Employer may defend its employment action and, if the action taken for lawful reasons, then no discrimination Individuals covered only under regarded as definition NOT entitled to reasonable accommodation

34 What is the best practical advice you can give employers for applying the ADAAA in their workplaces? ADA Update 34

37 37 Implications (cont.) Employers are more likely to have to defend qualification standards that exclude individuals from jobs based on impairments, since individuals affected by such standards will generally meet the regarded as definition of disability (i.e., unlikely that the impairments will be both transitory and minor).

38 38 Implications (cont.) Are qualification standards job-related and consistent with business necessity? Is decision to exclude applicant or employee for medical reason justified because he or she is not qualified or would pose a direct threat to safety? 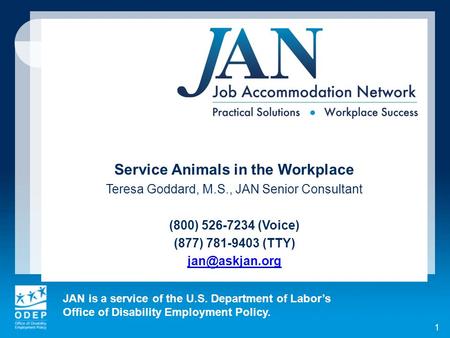 JAN is a service of the U.S. Department of Labors Office of Disability Employment Policy. 1 Service Animals in the Workplace Teresa Goddard, M.S., JAN. 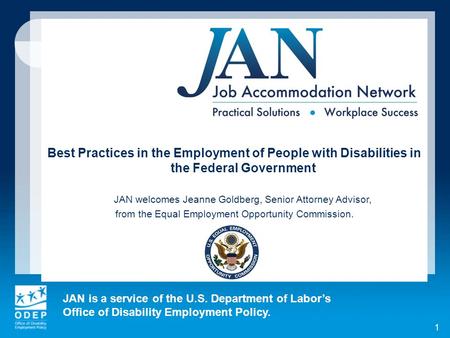 JAN is a service of the U.S. Department of Labors Office of Disability Employment Policy. 1 Best Practices in the Employment of People with Disabilities. 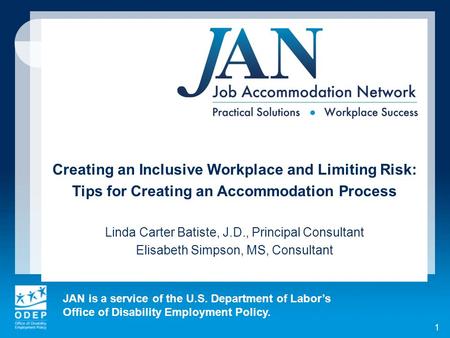 JAN is a service of the U.S. Department of Labors Office of Disability Employment Policy. 1 Creating an Inclusive Workplace and Limiting Risk: Tips for. 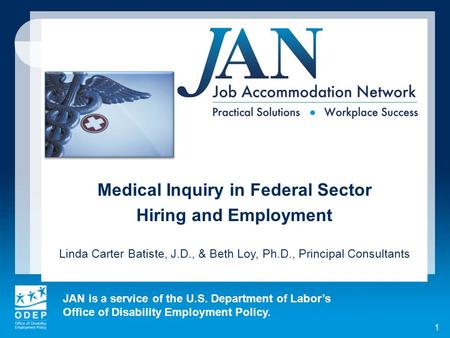 JAN is a service of the U.S. Department of Labors Office of Disability Employment Policy. 1 Medical Inquiry in Federal Sector Hiring and Employment Linda. 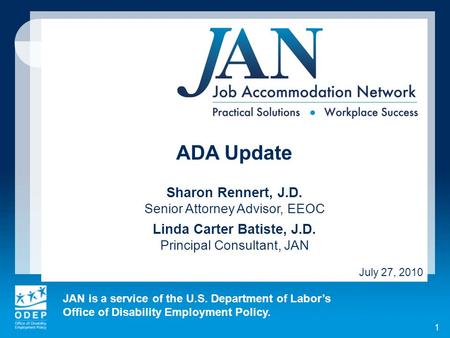 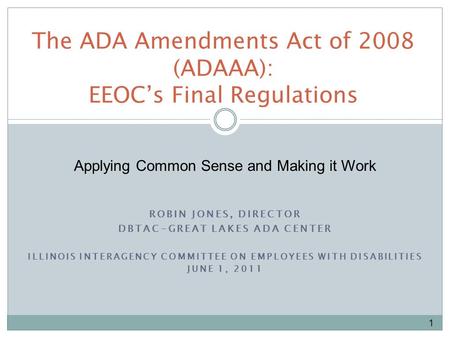 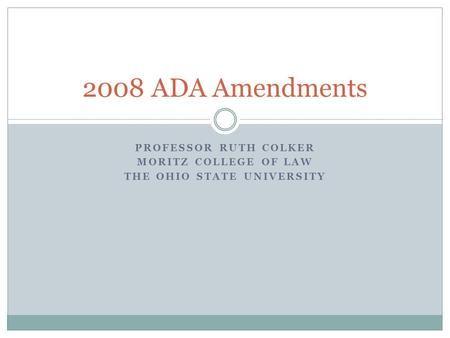 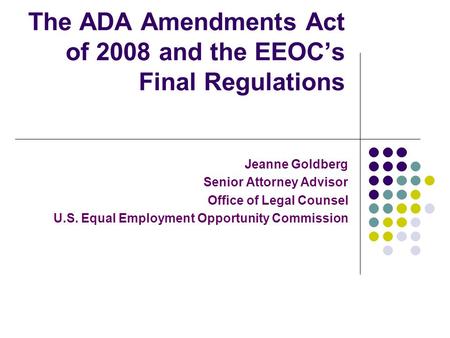 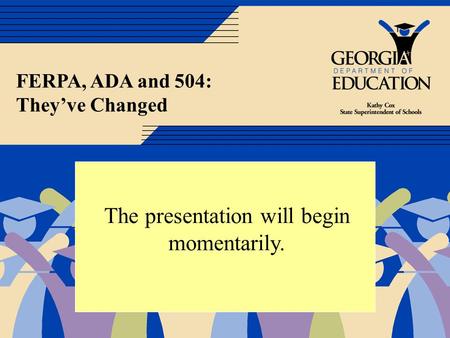 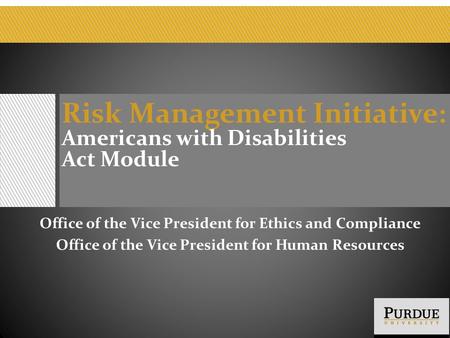 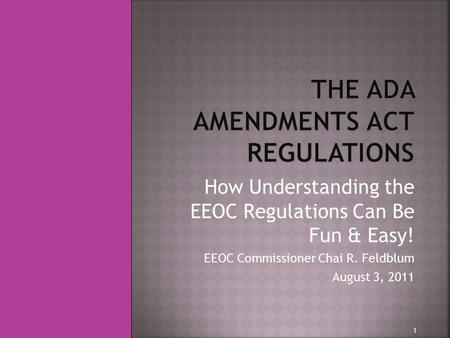 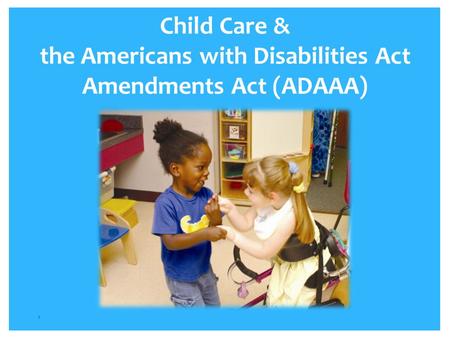 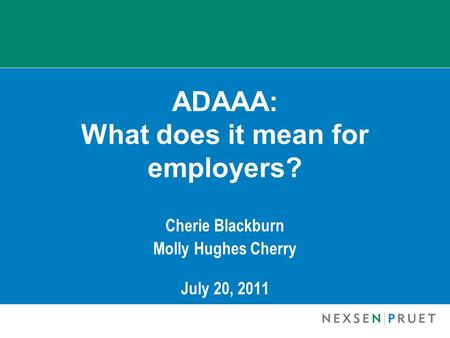 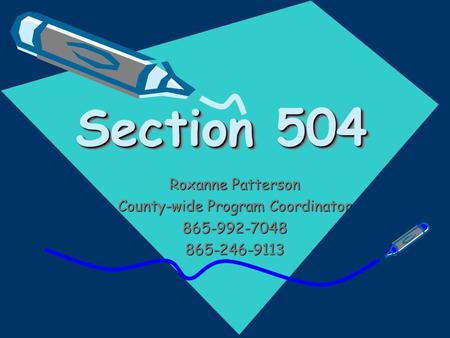 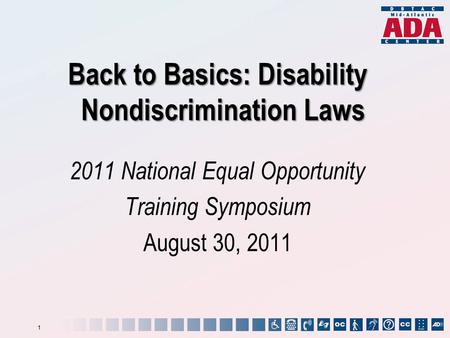 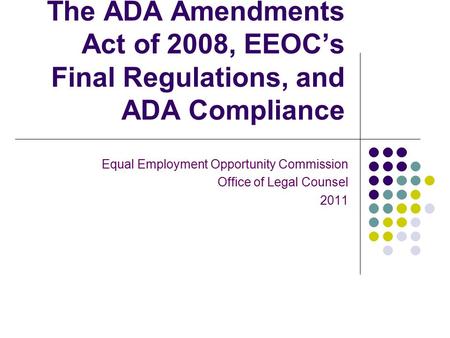 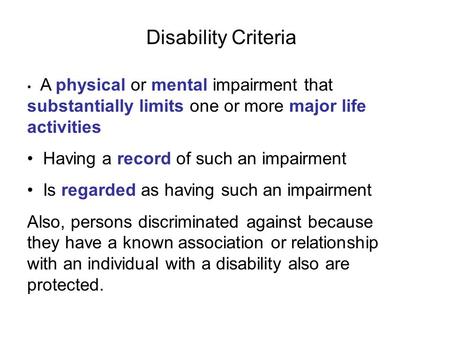 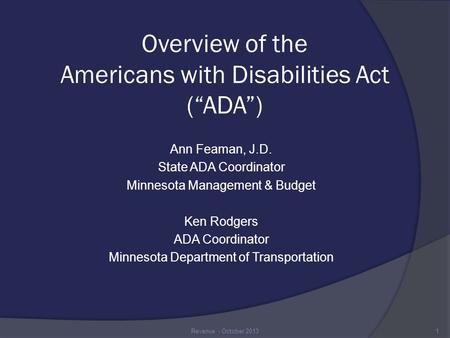 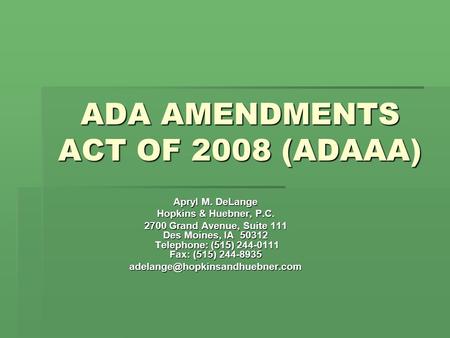