2 Classifying Governments
Who can participate in the governing process? The geographic distribution of governmental power within the state The relationship between the legislative (lawmaking) and the executive (law-executing) branches of government.

3 Who can participate To many people, the most meaningful of the classifications is the one the depends on the number of person who can take in the governing process.

5 Democracy Can either be direct or indirect.
Direct democracy, also called a pure democracy, exists where the will of the people is translated to public policy (law) directly by the people themselves in mass meetings. Does not exist on a national level. Usually can work in small communities.

7 Democracy People can either express their satisfaction or disapproval by casting ballots. Representative democracy is government by popular consent.

8 Democracy Some people call the United States a republic.
Republic, sovereign power is held by those eligible to vote. Political power is exercised by representatives chosen by and held responsible to those citizens. In a democracy people are the only source for any and all of the government’s power.

9 Dictatorship Those who rule cannot be held responsible to the will of the people. The government is not accountable for its policies, nor for how they are carried out. It is the oldest, and it is certainly the most common, form of government known to history

11 Dictatorship Modern dictatorships have tended to be totalitarian.
They exercise complete power over nearly every aspect of human affairs. Their power embraces all matters of human concern.

13 Dictatorship One person dictatorships are not that common today.
Example are Libya (Muammar al-Qaddafi) and some Arab and African states. Several groups are usually behind a dictator; army, religious leaders, industrialists. Typically are militaristic and power was gained through force. After crushing opposition at home, these regimes mat turn to foreign aggression to enhance the country’s military power and prestige.

16 Unitary Government All power is held by central government.
The government might not have all the power. In Great Britain the power held by the government is limited. It is both unitary and at the same time democratic.

18 Federal Government Constitution stands above both levels of government. Can not be changed unless people acting through both the National Government and the States agree to change. Each of the 50 State governments is unitary and not federal in form.

19 Confederate Government
Alliance of independent states a central organization. The confederate government handles only those matters that member states assign to it. Most often they do not have the powers to make laws that apply directly to individuals. Typically the power of this government is limited to defense and trade. Example-European Union

20 Confederate Government
This type of government is rare in the modern world. EU has 25 members and was launched to find a common currency and to coordinate foreign defense. In our own history Articles of Confederation ( ) Confederate States of America ( )

22 Parlimentary Government
Parliamentary Government- the executive is a prime minister or premiere and the official’s cabinet. Prime minister’s cabinet are members of the legislative branch, the Parliament. Remains in office only as long as their policy and administration have the support of the majority of Parliament. If vote of no confidence the Prime Minister and the Cabinet must resign and new government is formed

23 Parliamentary Government
Majority of the world’s governments are Parliamentary. Avoids one of the major problems of the presidential form. Prolonged conflict and sometimes deadlock between executive and legislative branches. On the other hand the system of checks and balances are not part of the Parliamentary system. 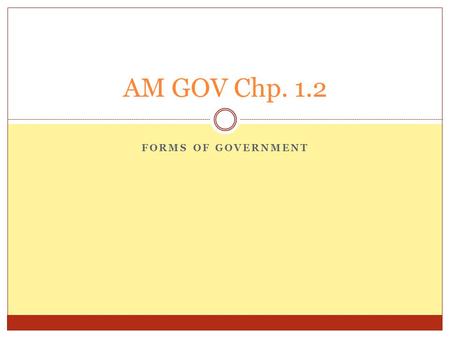 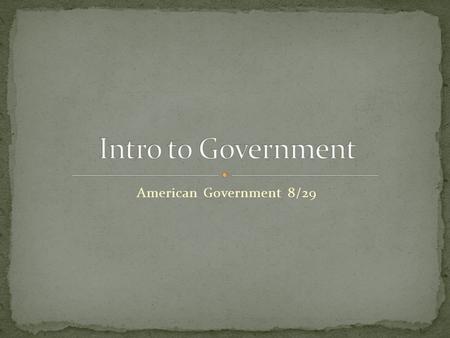