3 Setting the time and place in which events in a short story, novel, play, or narrative poem take place

5 Plot the sequence of events or actions in a short story, novel, play, or narrative poem

6 Exposition the introduction to a story. The setting and one or more characters are usually “exposed” to the reader.

7 Climax the moment of highest tension in a story, when events could go one way or another. It is sometimes known as the “turning point” of the story.

8 Rising Action the events in a story that lead up to the climax. The readers keep wondering what will happen next.

9 Falling Action the events in the plot that follow the climax and lead to the resolution of the problem.

10 Denouement the way the story turns out, one way or another. The story now feels finished.

12 Protagonist the central character of a drama, novel, short story, or narrative poem

13 Antagonist the character in a story who works against the protagonist. the “bad guy” in the story.

14 Point of View the perspective from which a story is told. Can be first person (I, me) or third person (he, she, it, they, etc.)

17 External Conflict External conflict occurs when a character struggles against some outside force. The outside force might be another person, a group of people, or it might be nature.

18 Internal Conflict Internal conflict takes place within the mind of a character. The character struggles to make a decision, take an action, or overcome a feeling.

20 Suspense the quality of a short story, novel, play, or poem that makes the reader or audience uncertain or tense about the outcome of events

21 Theme the central message of a literary work, expressed as a general statement about life or human nature.

22 Allusion A reference in a story to a mythological, literary, or historical person, place, or thing.

23 “To his surprise, his mother said he could keep the pigeon, temporarily, because it was sick, and we were all strangers in the land of Egypt, and it might not be bad for Aaron to have a pet.”

24 Mood Mood is the over-all atmosphere or feeling in a story or poem. The mood might be sad, serious, lighthearted, solemn, or any one of a number of adjectives that describe feelings.

26 Tone Tone is the writer’s or speaker’s attitude toward a subject, character, or audience, and it is shown through the author’s choice of words and detail.

28 Symbol Any object, person, place, or action that has both a meaning in itself and that stands for something larger than itself, such as a quality, attitude, belief, or value.

29 Example: If you see the color red, what does it usually mean? What idea does a dove usually represent?

30 Repetition The deliberate use of any element of language more than once – either a word, sound, phrase, or sentence for emphasis.

31 “…its head bobbing forth- back, forth-back, as if it were marching a little in front of the rest of the body…” Page 320

32 “Magic 3” A grouping of three or more words or phrases to help the reader visualize or understand a part of a literary work.

33 “And Aaron, miserable, argued with his mother and pleaded and cried and coaxed. It was no use. Not with those boys. No.” Page 323 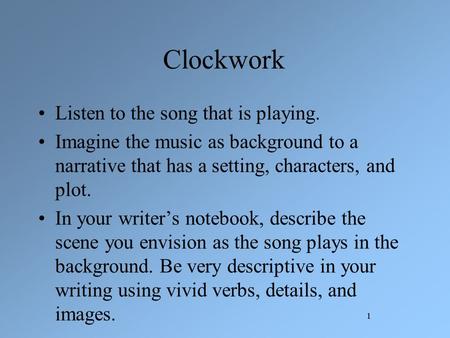 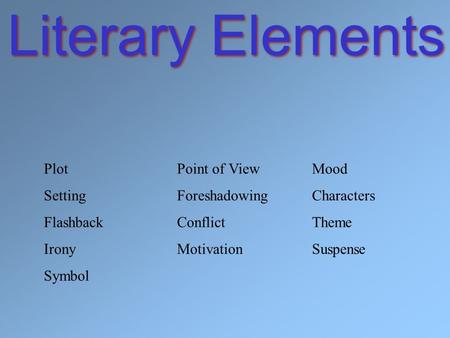