Presentation on theme: "Russia SS6G10 The student will explain the impact of location, climate, natural resources, and population distribution on Europe."— Presentation transcript:

1 Russia SS6G10 The student will explain the impact of location, climate, natural resources, and population distribution on Europe.

2 The Location of Russia  1.Russia spans two continents.  2. It covers the eastern part of Europe.  3. It spans the northern part of Asia.  4. A train trip from western Europe to eastern Europe would take one week.

5 Land of Russia  Russia is almost landlocked.  Most of the land is far from the sea or frozen over most of the year.  Ports on the Arctic Ocean must be cleared with icebreakers.

6 St. Petersburg  St. Petersburg is a port city on the Baltic Sea.  It was home to the Czars of Russia and the capital of Russia for over 200 years.  A network of railways surrounds the St. Petersburg, bringing goods into the city for shipment around the world.

8 Climate of Russia  European Russia has two seasons:  Winter and Summer  The hottest month is July and the coldest is January  The average yearly temperature of nearly all of Russia is below freezing.

9 Climate of Russia  Many areas have soil that is permanently frozen. This is called permafrost.  In the winter, railroad lines are changed to cross frozen lakes and rivers.  Because of the arctic winds, harsh winters are a part of Russian life.

10 Moscow  The capital city of Russia.  Snow is on the ground in winter for four to five months.  In the summer, winds from the south bring warmer temperatures, but not much rain.

13 Asian Russia’s Climate  The climate is extreme.  Siberia, the land furthest east, can have low temperatures of -40 degrees during the long winters.  Nights can be even colder.  Three to four feet of snow are possible. . Further north, a part of the ground stays frozen all year.

15 Summers in Asian Russia  Summers are usually mild. However, hot days in Siberia can reach over 90 degrees

17 The European Plain of Russia  It is the driest, but the lands bordering the Black Sea and the Baltic Sea are exceptions.  They have more rainfall and warmer temperatures.

18 Where People Live  The area around the Black Sea is considered subtropical, and it is popular summer resort area.  About 73 percent of the entire Russian population lives in European Russia, where the weather is harsh, but not as severe as the Asian Plains and Siberia.

19 Natural Resources  A land of many resources.  Vast forests for lumber  Deposits of gold, aluminum ore, coal, and iron are found in the Ural Mountains.

20 Russia’s Resources  Russia is a leading producer and exporter of gold, minerals, metals, and machinery.  Machinery is produced in many of Russia’s factories.

21 Volga River  The largest river in Europe.  Over half of Russia’s major cities are along the Volga.  The Volga is a source of hydroelectric power for industry and a waterway for ship manufactured goods.

22 Russia’s Hidden Resources  Russia’s large size and cold climate make it difficult to use their resources.  Oil and gas are natural resources located in Siberia and Asian Russia.  They are difficult to reach because of the harsh climate.

24 308. Which conditions keeps Russia’s natural resources from being used?  A. harsh climates  B. lack of workers  C. no market for these resources  D. no government funding

25 309. Which statement BEST describes the way the Volga River helps manufacturing?  A. it provides food and water for the workers.  B. Workers’ families ice skate and swim there.  C. It is used to clean machinery before it is shipped overseas.  D. It is used for hydroelectric power and transportation of goods.

26 310. With its long northern coastline, what makes shipping in Russia so difficult?  A. The northern ports are blocked by ice much of the year.  B. Manufactured goods and people prefer to travel by train.  C. The Volga River is used only for hydroelectric power, not for shipping.  D. Cruise ships bringing tourists to St. Petersburg take up much of the harbor.

Download ppt "Russia SS6G10 The student will explain the impact of location, climate, natural resources, and population distribution on Europe." 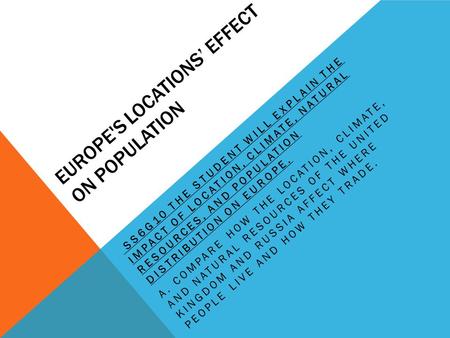