2 Torun, 3 and 4 February 2003 What is MINERVA A NETWORK OF MEMBER STATES MINISTRIES to discuss, correlate and harmonise activities carried out in digitisation of cultural and scientific content; for creating agreed European common recommendations and guidelines about: –digitisation, –metadata, –long-term accessibility, –preservation.

4 Torun, 3 and 4 February 2003 Aims Due to the involvement of EU governments, it aims to co-ordinate national programmes and to establish contacts with: –other European countries, –international organisations, –associations, –networks, –international and national projects involved in this sector, with a special focus on actions carried out in the DigiCult action of IST.

7 Torun, 3 and 4 February 2003 The main aim of MINERVA is to support the European framework made up of NRG, Lund principles, Lund Action Plan and Presidencies of EU in the field of the cultural heritage digitisation. The members agreed to give the highest visibility to the Lund principles in their countries, by setting-up national structures in charge of disseminating the results of the Minerva project. Policy Scenario

8 Torun, 3 and 4 February 2003 As an example, in Italy the Lund principles have been acknowledged and endorsed at the highest political level: Cabinet of Minister of Italian Ministry for Cultural heritage and Activities General Secretariat all the 8 General Directorates and 4 Central Institutes Regions All these institutions agree on the opportunity that MINERVA has to be highlighted during the Italian presidency of EU. Policy Scenario

9 Torun, 3 and 4 February 2003 National Resources All the member states agreed on the opportunity to invest on MINERVA project their own funding besides the budget provided by contract. National initiatives were born within the MINERVA framework.

12 Torun, 3 and 4 February 2003 The MINERVA Working Groups To provide political and technical framework for improving digitisation activities of cultural and scientific contents To contribute at the definition of a common European platform for the harmonisation of national initiatives

13 Torun, 3 and 4 February 2003 Working Group: Benchmarking To exchange comparable information between Member States on programmes and policies; To give visibility to national activities in order to share similar experiences and skills; To promote the adoption of a benchmarking framework as a key tool for co-ordinating and harmonising national activities as well as to develop measures to show progress and improvement.

14 Torun, 3 and 4 February 2003 Benchmarking Short term strategy: gathering data concerning at least 5 cases per country, analyse them and produce a report (to be issued during the first half of 2003) Long term strategy: to set-up methodology, shared data format and tool, for collecting data on a continuous base; to update constantly qualitative and quantitative information and to create a common database.

15 Torun, 3 and 4 February 2003 Working Group: Inventories, discovery of digitised content, multilingual issues To share experiences, to discuss and to facilitate implementation of common actions concerning: inventories of past, on-going and planned digitisation projects based on national observatories; technical infrastructure for coordinated discovery of European digitised cultural and scientific content, including a common set of metadata for description; multilingual issues.

18 Torun, 3 and 4 February 2003 Working Group: Good practices Aim: to select and to promote good practice examples from Member State programmes and projects in order to exchange experiences, skills and to collect consensus from different communities of users. First selection presented in Alicante, June 2002 First publication to be issued during the first half of 2003.

19 Torun, 3 and 4 February 2003 Which enlargements for MINERVA: to involve ALL the 15 MS to establish contacts in the candidate countries for further project extension to co-operate with the other running projects to settle the Minerva Users Group towards a stable European co-ordination framework for digitisation of cultural heritage. Network enlargement

21 Torun, 3 and 4 February 2003 Network enlargement The Co-operation Agreement to enlarge the network towards: the industry, the research, the local administrations, the associations, any other subject who is interested in contributing to the implementation of the Lund Principles.

22 Torun, 3 and 4 February 2003 Some reasons to joint MINERVA Why should an organisation invest in order to bring its activities under the MINERVA framework ? to share knowledge and experiences, avoiding to duplicate mistakes, to co-ordinate national/local initiatives within a European approach, being prepared for larger exploitation to share technological platforms and tools, saving efforts and money in replicating what already exists, to contribute to the necessary and ambitious common goal of implementing the Lund Action Plan.

23 Torun, 3 and 4 February 2003 MINERVA web site www.minervaeurope.org Next redesign and improvement, on the basis of the user requirements; The site is divided in two parts: – the Intranet, restricted only for internal use – the public section.

24 Torun, 3 and 4 February 2003 MINERVA web site the aims of the public section in the short term: - to promote the Lund principles as well as the activities and the results of the project - to promote the projects partners - to become a gate to access to other linked initiatives in the long term: - to become an essential instrument to resarch information on digitisation, metadata, long-term accessibility, preservation.

25 Torun, 3 and 4 February 2003 Principal events of the Italian Presidency related to Lund Principles and MINERVA –Florence, October 2003: international conference in Florence about Long Term Preservation of Digital Memories –Rome, October 2003: meeting of MINERVA user group, in conjunction with the National Congress of AIB –Parma, November 2003: international congress in Parma on Accessibility and Quality framework on cultural web sites (org. within MINERVA) –Parma, November 2003: meeting of the NRG, in conjunction with the congress above mentioned. The events are organised by the Cabinet of the Minister, the General Secretariat and all the General Directorates of MBAC, in cooperation with the Regions. 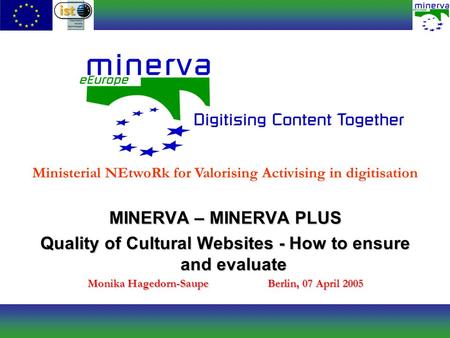 MINERVA – MINERVA PLUS Quality of Cultural Websites - How to ensure and evaluate Monika Hagedorn-SaupeBerlin, 07 April 2005 Ministerial NEtwoRk for Valorising. 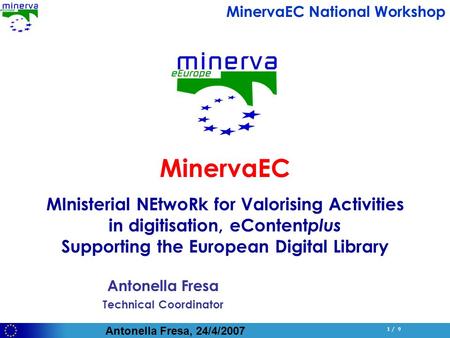 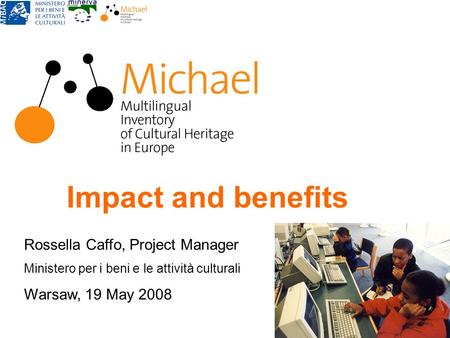 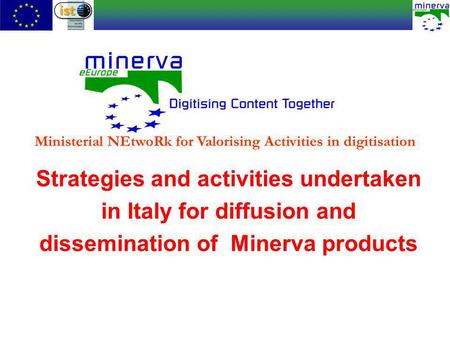 Strategies and activities undertaken in Italy for diffusion and dissemination of Minerva products Ministerial NEtwoRk for Valorising Activities in digitisation. 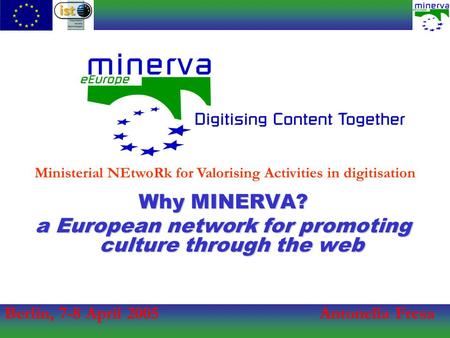 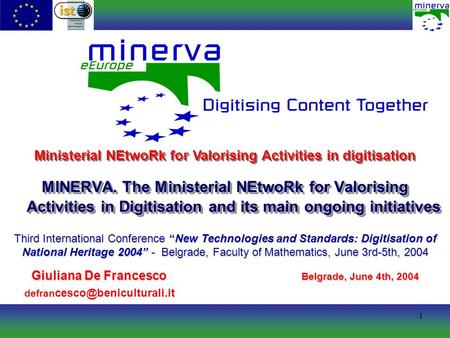 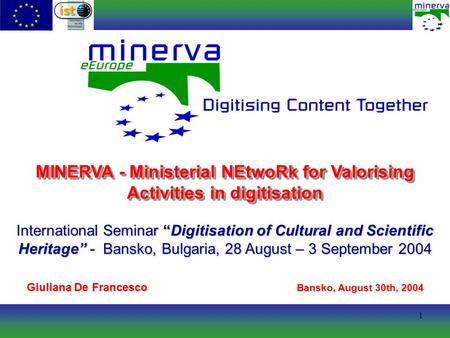 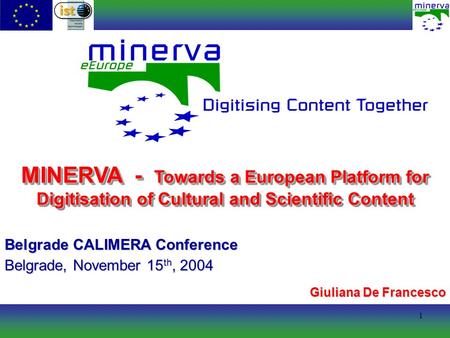 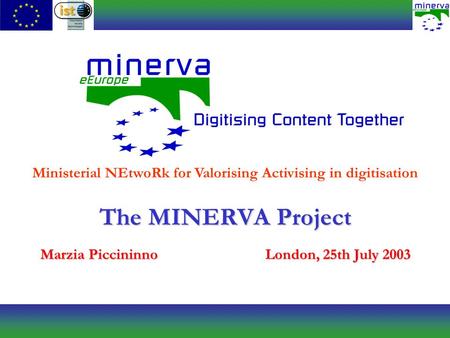 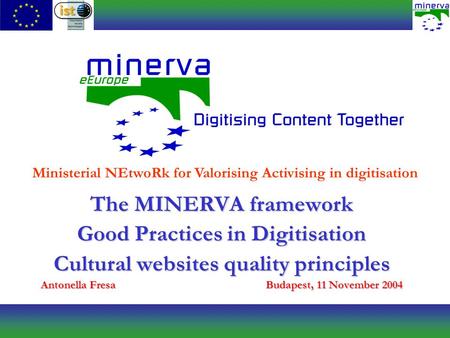 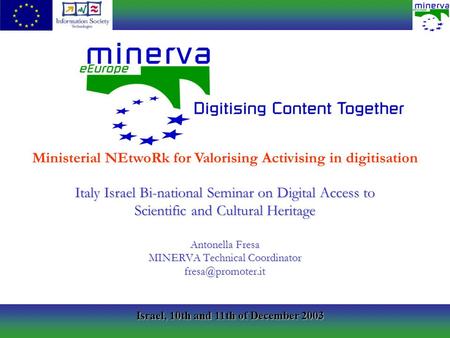 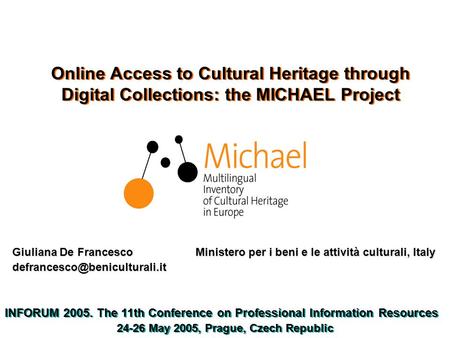 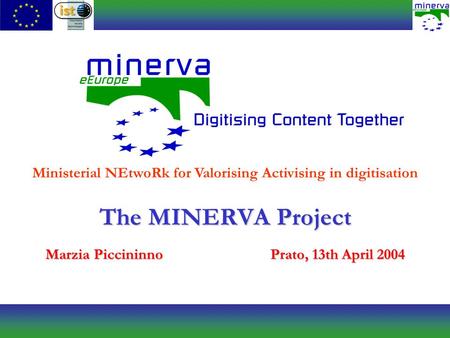 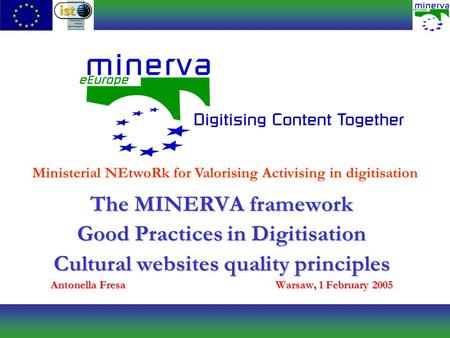 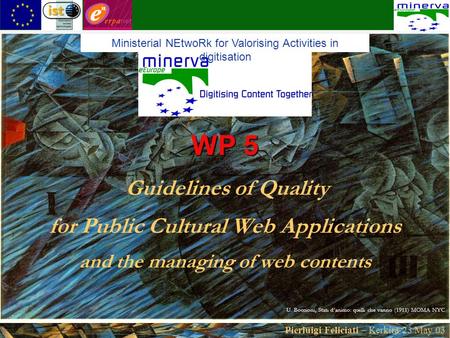 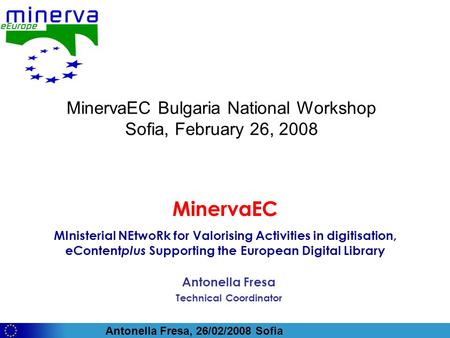 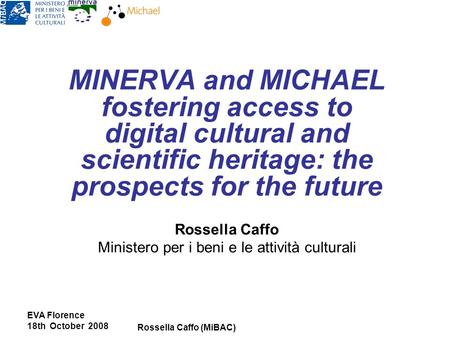 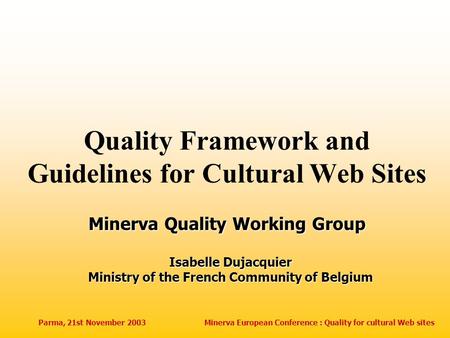 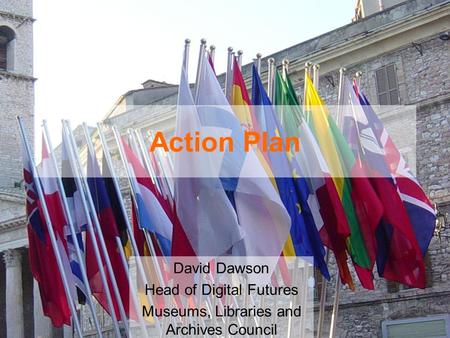 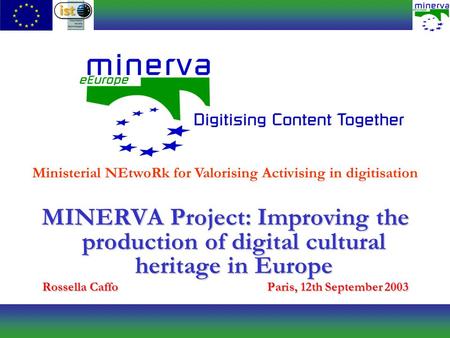