3 Objectives Know drug names and general category of organisms that the drug is used for i.e. protozoa, roundworm, cestode (tapeworms), trematode (flukes) etc. Don't memorize the specific drug of first choice for each infecting organism. Understand the mechanism of action and the basis for selective toxicity for each of the anti-parasitic drugs. Know major toxicities and relevant aspects of drug distribution.

4 Drug Names In bold throughout the handout
The drug list on p. 2 of the word handout will be covered on the ICM exam Summary tables on p. 3 (protozoa) and p. 9 (worms) of the handout

6 Summary of Protozoal Disease Treatment
Mechanism Selectivity Paromycin: just like the other aminoglycosides, except it stays in the gut. Good b/c that’s where the parasites are and this prevents the systemic side effects (nephrotoxicity and ototoxicity)

11 Iodoquinol Unknown mechanism
Selective distribution – only 10% of the drug is absorbed so it works locally on the protozoa in the GI tract Effective only against intestinal form of the disease i.e. luminal amebicide Most serious side effect is loss of visual acuity and even blindness at higher doses.

17 Tetracycline Incompletely absorbed
Not for use in children or during pregnancy Alters intestinal flora that is essential for proliferation of the amoeba Incomplete absorption is why it’s effective against protozoa.

18 Used in Immunocompromised
No treatment in healthy individuals

25 Organic antimonials Leishmania and macrophages
Sodium stibogluconate Meglumine antimonate Interferes with glycolysis and fatty acid beta-oxidation in leishmania with a net reduction in the generation of ATP and GTP More recent studies suggest that the drug interferes with the trypanothione (like glutathione) redox system Incidence of treatment failures is increasing and resistance occurs Fairly well tolerated initially, but toxicity increases over time Adverse effects can include coughing, vomiting, myalgia, arthralgia, EKG changes

27 Miltefosine Unknown mechanism; maybe inhibition of protein kinase C or phosphatidylcholine synthesis Vomiting and diarrhea in up to 60% of patients Promising treatment for leishmaniasis especially where resistance to antimonials is a problem (India)

29 Pentamidine T. brucei, extracellular
Used in early trypanosomiasis before CNS involvement Does not penetrate the CNS Mechanism of action is thought to be interference with kinetoplast DNA replication as a type II topoisomerase inhibitor. A kinetoplast is a specialized structure in the trypanosome which is part of the mitochondrial system Resistance can occur from altered drug uptake Can be quite toxic - Hypotension, tachycardia, vomiting, hypoglycemia Since it doesn’t penetrate CNS, don’t use in late stages of Sleeping sickness

31 Arsenicals - Melarsoprol
First line drug used for sleeping sickness which has progressed to CNS involvement. Penetrates into CNS Mechanism of action probably involves sulfhydryl binding. The principal target is believed to be trypanothione, a substitute for glutathione in trypanosomes. Trypanothione maintains a reducing environment intracellularly and this is upset in the presence of melarsoprol. Very toxic - Encephalopathy, Fever, Hypertension, Vomiting, Albuminuria Resistance can occur from altered drug uptake.

32 Nifurtimox T. cruzi, Chagas disease
Mainly for Trypanosome cruzi which multiplies within cells Mechanism thought to be similar to nitrofurantoin; formation of reactive oxygen species resulting in cellular damage Most effective in acute stages and ineffective in chronic stages of the infection. Side effects are common; nausea, vomiting, myalgia, weakness, peripheral neuropathy

37 Helminth Infections Multicellular organisms with crude organ systems
Pathogenic forms of most of the worm infections amenable to chemotherapy are the adult, non-growing stages of the parasites life cycle. Growth inhibitors are not particularly useful.

39 Strategies for selective toxicity
Exploiting the biochemical differences between the parasite and host Differential distribution of the drug. The parasite is exposed to high concentrations of the drug in its intestinal habitat by the use of orally administered non-absorbable drugs.

44 Mebendazole, Albendazole
Binds to parasite tubulin and inhibits assembly of tubulin dimers into tubulin polymers. This causes a lack of formation of microtubules which are important in larval development, transport of carbohydrates (glucose uptake) and enzyme function. Good for treatment of multiple worm infections Resistance involves mutations in parasite tubulin

47 Tissue Roundworms Filariasis – caused by nematodes that inhabit the bloodstream or lymphatics and subcutaneous tissues as adults and microfilaria. Adverse effects of the drugs may be due in part to the host response to destruction of microfilaria.

48 Ivermectin Produces a paralysis of the peripheral musculature of the parasite, possibly by potentiating GABA-mediated signal transmission or by activating glutamate-gated chloride channels. Well tolerated Transient side effects include itching, swollen lymph glands and rarely dizziness and postural hypotension Adverse effects may be due in part to the host response to destruction of microfilaria.

49 Diethylcarbamazine Immobilizes the microfilaria by an unknown mechanism Headache, malaise, weakness, nausea, vomiting Adverse effects may be due in part to the host response to destruction of microfilaria. Use in River Blindness (Onchocerca volvulus) increases risk of ocular side effects, including blindness, associated with rapid killing of the worms

55 Board Study for Chemotherapy
Combine the antibacterial, antifungal, antiviral and antiparasitic drugs and make sure you can put each name in a drug class Mechanism Differences amongst drugs in a class Major toxicities Major issues of distribution and elimination Try to put the bugs and drugs together when it makes sense Example: Ineffectiveness of aminoglycosides against anaerobes; What are the anaerobes? Penicillinase producing Staph; What drug would you use? 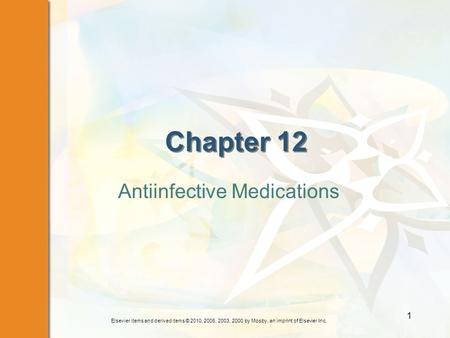 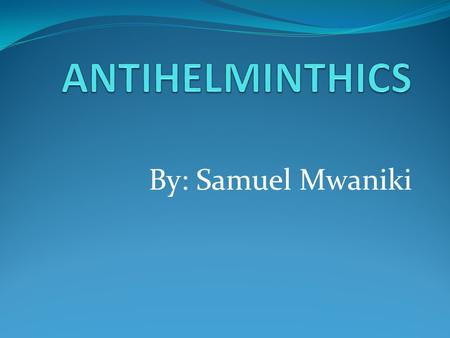 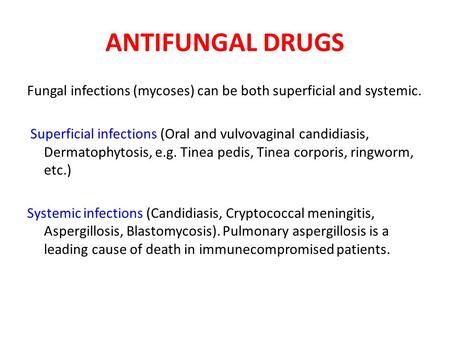 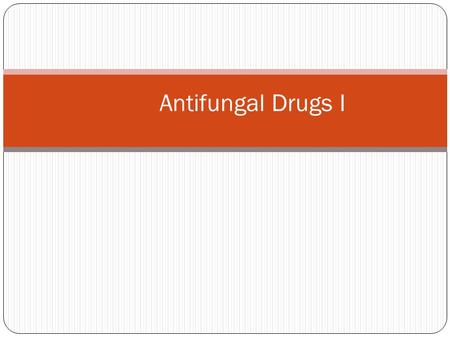 Antifungal Drugs I. Humans and fungi share a common biosynthetic pathway for sterols from squalene (via squalene 2,3 epoxidase and other enzymes) to lanosterol. 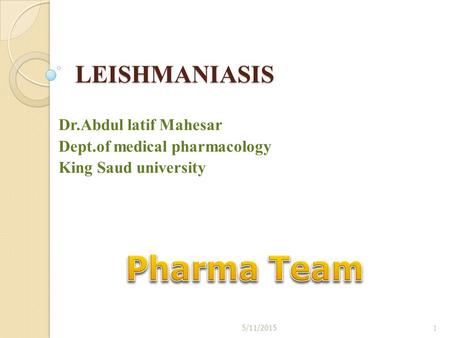 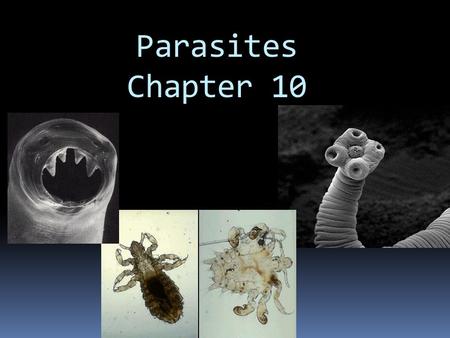 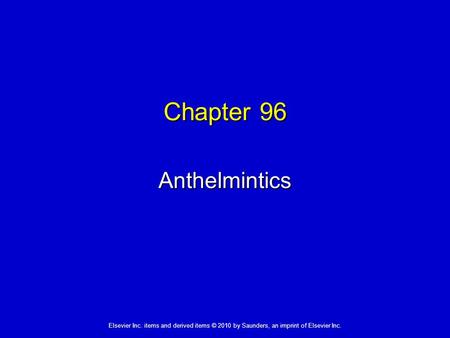 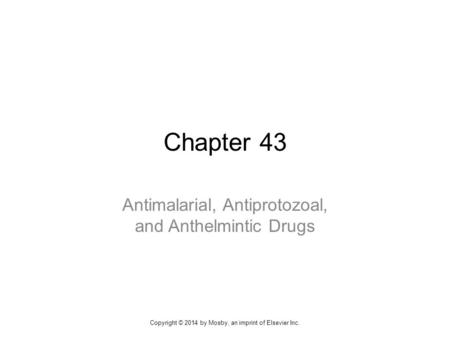 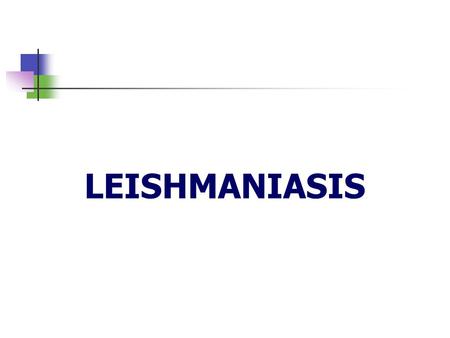 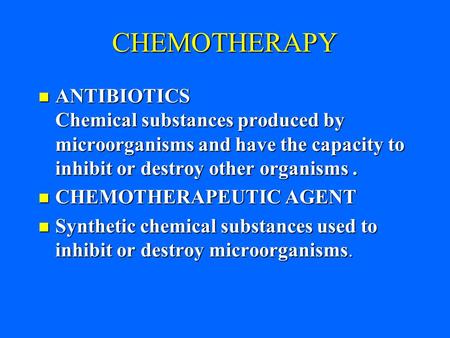 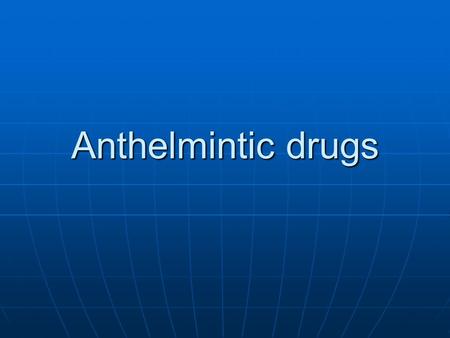 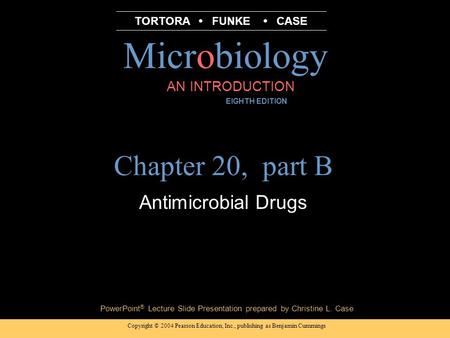 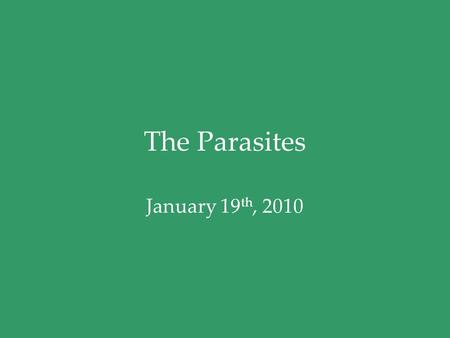 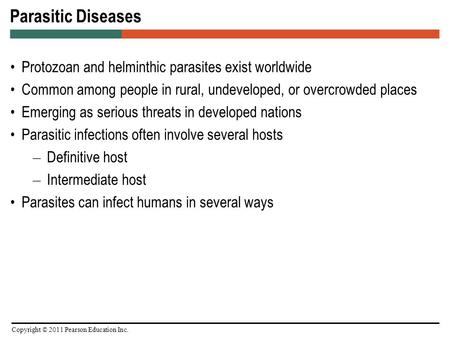 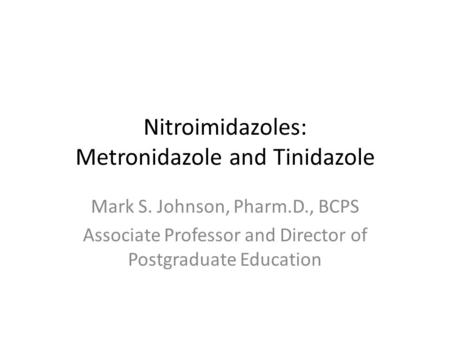 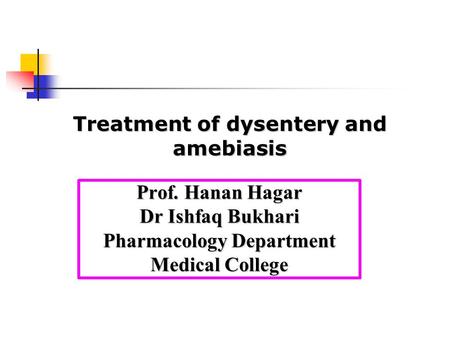 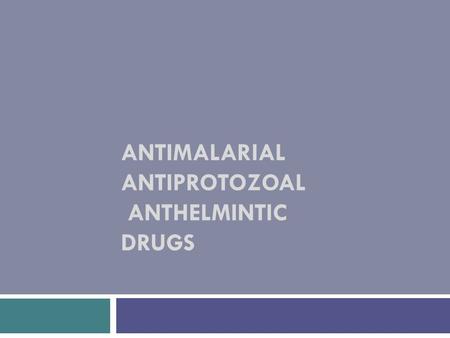 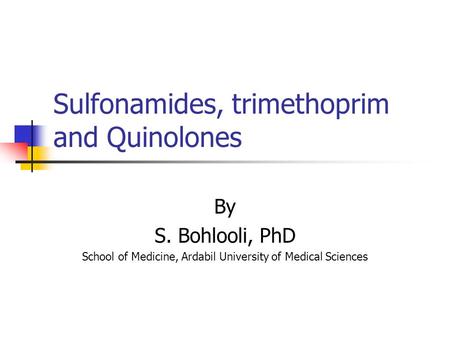 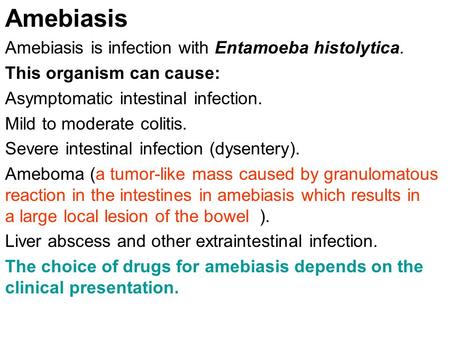 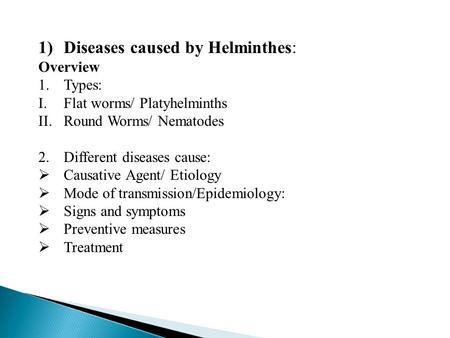