1 Physical Science 22 Characteristics of the Atmosphere

4 The atmosphere has several different layers The layers differ in: temperature density amount of gases present

5 Turn to page 742 in your text book Copy figure 1 in your notebook Be sure to note the different atmosphere layers, location, temperature, altitude, pressure, and special characteristics

6 Almost all weather occurs in the troposphere Troposphere-the lowest layer of the atmosphere, in which temperature drops at a constant rate as altitude increases This is the densest of the layers due to the weight of all other layers

7 The troposphere gets cooler with increasing altitude At the top of the troposphere the temperature stops decreasing This region, the tropopause, at (-55°C) keeps the water vapor and clouds.

9 Stratosphere Stratosphere- the upper layer of the atmosphere, which lies immediately above the troposphere and extends from 10 km to about 50 km above Earth’s surface Ozone-a gas molecule that is made up of three oxygen atoms

10 The stratosphere is a cold, low-pressure layer Key differences: –Little water vapor –No weather or clouds –Increase in temperature with increased altitude (ozone layer-absorbs much of the sun’s ultraviolet radiation)

12 Ionosphere is used in radio communication Ionosphere- area in which solar energy is absorbed in the lower thermosphere and upper mesosphere (creating electrically charged ions) Electrons in the ionosphere reflect radio waves, allowing them to be received over long distances

14 Changing in Earth’s Atmosphere Early in Earth’s existence, the atmosphere contained mostly carbon dioxide, nitrogen, and a few other trace gases ( H 2, water vapor, H 2 0, NH 3, CH 4, CO, CO 2, but no O 2 ) This was due to outgassing from volcanoes

15 Photosynthetic plants contribute oxygen to the atmosphere Around 2.5 billion years some cells evolved a method of capturing energy from the sun and converting it to sugar that can be used as a food source Photosynthesis produces oxygen as a byproduct

19 The greenhouse effect keeps Earth warm Greenhouse effect- the warming of the surface and lower atmosphere of Earth that occurs when carbon dioxide, water vapor, and other gases in the air absorb and reradiate infrared radiation

20 The greenhouse effect is a process in which atmospheric gases trap some of the energy from the sun in the troposphere A. Solar radiation warms Earth’s surface and is radiated back into the atmosphere as heat radiation B. Greenhouse gases, CO 2 and H 2 O receive this heat radiation and radiate some back to Earth’s surface C. CO 2 is added to the air in the burning of fossil fuels and in forest fires, possibly causing global warming!

21 Increased levels of carbon dioxide may lead to global warming Without the greenhouse effect, Earth would have a colder average temperature If too much heat is trapped, the global temperature will rise Global warming could cause the icecaps to melt, ocean levels to rise, and droughts to occur in some areas!

22 Sources of carbon dioxide Burning of coal, oil, and gas for power plants, machinery, and cars Cause of global warming and what to do about it is highly debatable 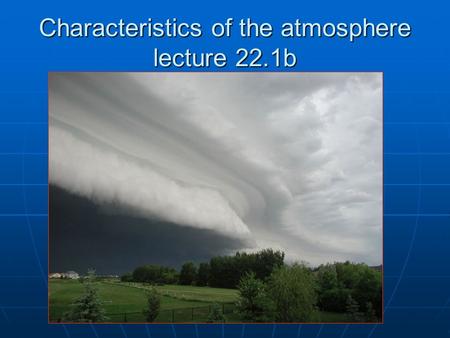