4 What is genetic engineering?
In 1973, Mr. Cohen and Mr. Boyer conducted an experiment on the DNA of an American frog. They found and isolated the gene that codes for ribosomal RNA in the DNA of the frog. They removed that gene from the frog and inserted it into some E. Coli Bacteria.

5 What Happened? During transcription, the bacteria then produced the frog RNA! Genetic Engineering: the process of manipulating (moving) genes for practical purposes (useful) Recombinant DNA: DNA made from 2 or more organisms that are different.

6 The Basic Steps of Genetic Engineering
Cutting the DNA: Restriction Enzymes: bacterial enzymes that recognize and bind to specific short sequences of DNA, and then cute the DNA between specific nucleotides within the sequences. Vector: agent used to carry the gene of interest – usually plasmids Plasmid: the circular DNA molecules that replicate

7 The Basic Steps to Genetic Engineering
Making Recombinant DNA DNA fragments of interest (that have already been cut) are combined with the vector. DNA ligase – the enzyme bonds the 2 ends of the fragments to the vectors. Cloning Gene cloning: the process of making many copies of a gene Bacteria reproduce by binary fission

8 The Basic Steps to Genetic Engineering
Screening Cells that have received the gene of interest are separated out. Those cells then continue to produce the protein coded for by the gene

9 Cutting DNA & Making Recombinant DNA
How Restriction enzymes work: The Enzymes recognize specific sequences on Human and Bacterial Plasmids The Enzymes cut the strands. The cut produces DNA fragments with short strands on each end that are complementary to each other “Sticky Ends” Both the human DNA and the Plasmid “Open Up” with the same sticky ends remaining They Bind Together

12 Confirmation of a Cloned Gene
One method used identify a specific gene is called a Southern Blot Steps: Cut DNA from bacteria with restriction enzymes. DNA fragments are separated by a gel soaked in a chemical solution. Gel electrophoresis – uses an electric field within a gel to separate molecules by their size

13 Confirmation of a Cloned Gene
Negatively charged DNA is put into these wells. They are attracted to the positive pole from the electric field. The Smallest DNA fragments move the fastest

15 Confirmation of a Cloned Gene
The DNA separated is then transferred to a filter paper (blotted) and a probe solution is added. Probes: radioactive RNA or single-stranded DNA pieces that are complementary to the gene of interest Only DNA fragments complementary to the probe will form and bind bands

16 Confirmation of Cloned Genes
Why do this? Bacterial colonies can be used to produce large quantities of the protein (used to study or make drugs)

18 DNA fingerprinting DNA fingerprinting: a pattern of dark bands on photographic film that is made when an individuals DNA restriction fragments are separated by gel electrophoresis, probed, and exposed to X-ray film. DNA fingerprints can be used to establish paternity, identify genetic disorders, or in forensics (scientific study of cause of injury or death in criminal activity)

21 Animal Farming Growth hormones given to cows to produce more milk
Human genes added to farm animals in order to have human proteins in their milk The Human proteins are extracted from milk and sold to pharmacy companies. Useful for complex proteins that can’t be made in bacteria

23 Animal Farming Transgenic animals: Animals that have foreign DNA in their cells Cloning of animals is another way to make large quantities of a certain protein. How it works: an intact nucleus from an embryonic cell (whose DNA has recombined with a human gene) is placed into an egg whose nucleus has been removed. The “new” egg is then placed into the uterus of an animal.

24 Cloning Donor Nucleus Fused Cell Egg Cell Embryo Cloned Lamb
A donor cell is taken from a sheep’s udder. Donor Nucleus These two cells are fused using an electric shock. Fused Cell Egg Cell The nucleus of the egg cell is removed. An egg cell is taken from an adult female sheep. The fused cell begins dividing normally. Cloned Lamb Embryo The embryo develops normally into a lamb—Dolly The embryo is placed in the uterus of a foster mother. Foster Mother 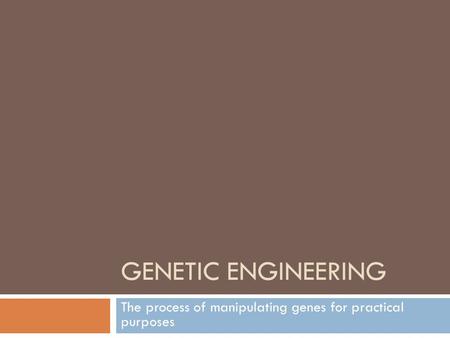 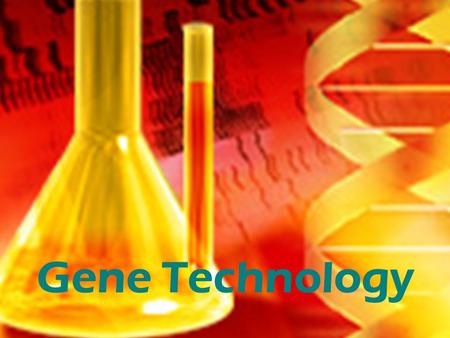