2 The Holy Land Long ago, Hebrews of Mesopotamia migrated west
Called that land Israel Jerusalem, the capital of modern-day Israel, was the major city

3 The Birthplace of 3 Religions
Over centuries, this land was conquered and controlled by many The Romans drove the Jews out of Israel Arabs took over around 600 A.D. With each new group, a new religion was born As a result, Judaism, Christianity, and Islam all have origins in Jerusalem

4 Judaism Oldest monotheistic religion Fundamental Beliefs:
There is a single, all-powerful God Called Yahweh, or Jehovah Created the universe and everything in it The Ten Commandments given to Moses on Mount Sinai Laws for leading a life devoted to God Jerusalem, and Israel, is the land God promised to Abraham A Messiah will come one day to end all evil

5 Holy Text - The Torah The Torah is the holy text
God gave the Torah to the Jews as a guide to living a holy & obedient life The Talmud is the Holy Book of Law A copy of the Torah, written in Hebrew, must be kept in a synagogue Synagogue – Jewish religious house of worship

6 Important Jewish Figures
Abraham Born in Ur (Mesopotamia) Made covenant, or promise, with God Ancestor of the Jews Moses Jewish prophet Brought the Ten Commandments to the Jews from God

8 Judaism Facts 12 millions followers around the world
If not for the Holocaust, Jewish population would be near 35 million worldwide Most Jews live in Israel or in the USA Jewish community leader called a rabbi Holy Day, or Sabbath, is from sunset Friday to sunset Saturday

9 Christianity Founded by Jews, called Disciples
Started between 4 B.C. and 30 A.D. Fundamental beliefs: God created, maintains, and will destroy the Earth The Ten Commandments Jesus, the Messiah, died for mankind’s sins so humans may have eternal life in Heaven Love thy neighbor

11 Important Christian Figures
Jesus Son of God, who is the human form of God Holy Spirit Spirit of God that can enter humans Holy Trinity – the three forms of God God, in Heaven Jesus, God’s human form on Earth Holy Spirit, inside all humans

14 Islam Founded around 600 A.D. in Saudi Arabia Fundamental beliefs:
There is only one god named Allah Muhammad is the true prophet Mecca is the most holy place on Earth The 5 Pillars of Islam

15 The 5 Pillars of Islam Pillar 1 – Shahada Pillar 2 – Salat
There is no God but Allah, and Muhammad is His messenger Pillar 2 – Salat Pray 5 times daily facing toward the holy city of Mecca Pillar 3 – Zakat Give a portion of one’s income to the poor/charities Pillar 4 – Sawm Do not eat or drink from sunrise to sunset during the holy month of Ramadan Pillar 5 – Hajj If in good health, make a pilgrimage (journey) to Mecca at least once in a lifetime

16 Important Muslim Leader
Muhammad Lived about 600 years after Jesus Was a trader and traveled in caravans Along the routes, learned about the Jewish and Christian faiths Was visited by the angel Gabriel who was sent by God Retold those messages to others who became his followers Believed it was the true version of Judaism

17 Mecca Mecca, located in Saudi Arabia, is the holiest site
Used to be Jerusalem until Muhammad cut ties with Jewish religion Millions make pilgrimage yearly Birthplace of Muhammad The location Muslims orient to when praying

18 Holy Text - The Quran The Quran = collection of the messages sent by God to Muhammad through Gabriel Many Muslims believe the only true Quran is written in Arabic Sharia Law Not a part of the Quran, but derived from it Religious code for living Today, used as governing laws for many Arab nations

20 Islam Facts Muslims often pray at a mosque
About 1 billion Muslims worldwide Most live in the Arab nations of the Middle East Many Middle East nations are theocracies Theocracy = religion and government are the same Sharia Law is the governing law Two major groups: Sunni Follow the elected Muslim leaders Majority of Muslims (940 million) Shia Follow the descendents of the family of Muhammad as leaders 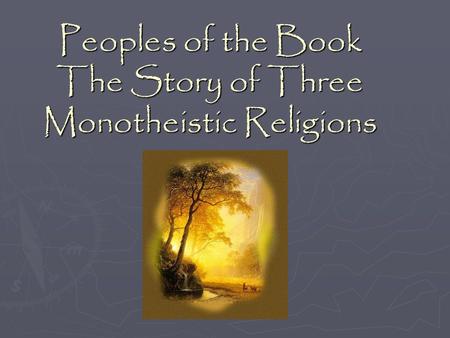 Peoples of the Book The Story of Three Monotheistic Religions. 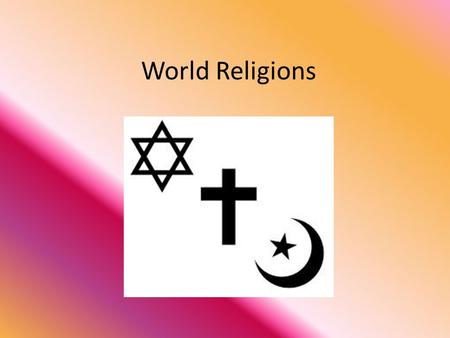