2 New manufacturing methods spread
Manufacturing methods/concepts used in textiles spread to other industries. Eli Whitney signs a government project. - Claims he can make 10,000 army muskets in 2 years. - Fails, but does successfully demonstrate the concept of interchangeable parts. Interchangeable parts revolutionized industry: Made replacing parts easier Made production faster Reduced production costs Allowed for a less-skilled labor force Impact: Migration of people from farms to cities. Work done in factories instead of the homes.

8 Impact of new inventions
Linked regions together / National Unity Ex. Midwestern farmers grew food to feed northeastern factory workers. Midwestern farmers bought manufactured goods from the east. As more factories were built in the north, their demand for southern cotton increased. (Downside: Led to expansion of slavery in the South)

9 Invention trivia What else did Peter Cooper invent?

10 1st American patent for gelatin
In 1895, Pearl B. Wait, a cough syrup manufacturer, bought the patent from Peter Cooper and turned Cooper's gelatin dessert into a prepackaged commercial product, which his wife, May David Wait, renamed

11 Elias Howe – 1846 Originally invented by an apprentice, but Howe made slight improvements and patented the machine and made a future.

12 Safety Pin - 1849 Rubber Band -1845 Game of Basketball Telephone
original game that was invented by him contained soccer balls which had to be thrown in the peach baskets with their bottoms closed. Alexander Graham Bell 1876 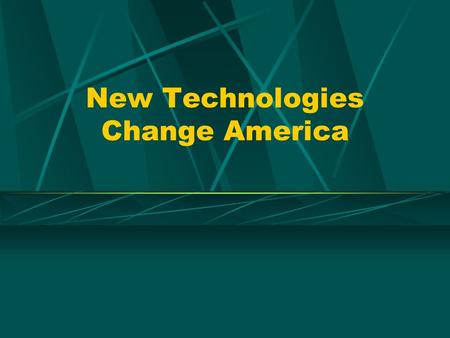