1 Ionic Compounds and Ionic Bonds Compounds composed of cations and anions are called ionic compounds. Ionic bonds – the electrostatic force that holds ions together in ionic compounds. Notice how the ions formed have the stable electron configuration of the octet of a noble gas.

2 Formula unit – The lowest whole number ratio of ions in an ionic compound The coordination number of an ion is the number of ions of opposite charge that surround the ion in a crystal.

4 Properties of Ionic Compounds 1. Usually a solid crystal at room temperature 2.Generally have a high melting point (for example NaCl mp = 800 degrees C) 3. Can conduct an electric current when melted or dissolved in water

5 Bonding in Metals Metals are made of closely packed cations, not neutral atoms Valence electrons of metals can be modeled as a Sea of Electrons. Metallic bonds are the attraction of the free floating valence electrons for the cations High electrical conductivity – The large number of mobile electrons explains why metals have electrical conductivity several 100 times greater than a typical nonmetal. Ag is the best conductor.

6 More about metallic bonds Good conductor of heat – due to frequent collisions between the mobile electrons of metals Ductile and malleable – the sea of electrons acts like a flexible glue, holding the nuclei together, so metal crystals can be deformed without shattering Luster – most metals have a silvery white metallic color because they reflect light of all wavelengths. Because electrons are not restricted to a particular bond, they can absorb and re-emit light over a wide wavelength range.

7 More metal facts No metal dissolves in water, but the only liquid metal (at room T), mercury, dissolves many metals, forming solutions called amalgams. A Ag-Sn-Hg amalgam is used in filling teeth.) Lowest melting point for metals is Hg at - 39 C, and the highest is for tungsten at 3410 C.

10 Alloys are mixtures of 2 or more elements, at least one of which is a metal.

Chapter 7 “Ionic and Metallic Bonding”. Metallic Bonds are… l How metal atoms are held together in the solid. l Metals hold on to their valence electrons. 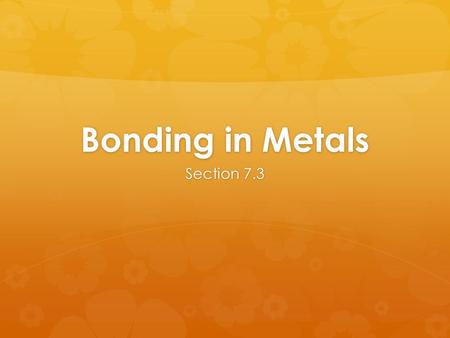 Bonding in Metals Section 7.3. Objectives  When you complete this presentation, you will be able to …  Model the valence electrons of metal atoms. 