Presentation on theme: "Population. Do NOW! What are the world’s most populated regions?"— Presentation transcript:

2 Do NOW! What are the world’s most populated regions?

4 1.Birth Rate - rate at which the population grows due to births over a reference period 2.Population – the total number of persons inhabiting a country, city, district or any area 3.Cause and effect – the reason something happened and the result of what happened 4.Habitable – able to be lived in or on 5.Migration - the movement of persons from one country or locality to another 6.Carrying capacity - The number of people that an area can support given the quality of the natural environment and the level of technology of the population 7.Urban - of, pertaining to, or designating a city or town 8.Rural – of, pertaining to, or designating the country or pertaining to agriculture 9.Push/Pull factors - the push factor involves a force which acts to drive people away from a place and the pull factor is what draws them to a new location

5 7 BILLION 7 Billion THINK: – What are some things that stand out to you? 3-5 things. – What are some challenges of having 7 billion people in the world? – What do you THINK are the 5 most populated countries?

10 Population Density Why do people live in these areas? Are there any places (climate zones or biomes) that people would be less likely to live in?

16 Managing Population How do we manage population? – Birth Rate has to decline How have countries such as India and China responded to rapidly growing populations? – One Child Policy v. Family Planning Program

18 Demographic Transition 200 Countries, 200 years, 4 minutes How was life in the year 1810? What helps European countries separate from the rest of the world in development? How did gaining independence help some countries? What happens when you separate cities from countries?

21 Are there any countries in Stage 1? Where does the majority of the world lie?

24 Power to the Pyramids Complete the Population Pyramid for you counrty Supplies: – Colored pencils, calculator and ruler

28 Both push factors and pull factors drive people to move to a new country.

29 Pull Factor Something that encourages people to move to a new place.

30 Push Factor Something that encourages people to leave a place behind.

31 Push factors give people good reason to leave unpleasant circumstances in their home country. Such factors include war and poverty, discrimination, and famine. Haiti

32 emigrate To move from a country. People who leave a country are called emigrants.

33 Pull factors attract people to a new place and encourage them to immigrate there. These factors include freedom and opportunities for a better life.

34 immigrate To move to a country. People who move to another country are called immigrants.

35 Push and pull factors have helped to drive one of the most dramatic migrations in history. Since 1820, more than 65 million people have come to the United States. This enormous migration came in three great waves.

36 refugees Someone who seeks safety by going to another country. Refugees may be escaping political unrest or war. Or they may fear being attacked because of their beliefs. Vietnamese Refugees

37 War is one of many political factors that can create refugees. Bosnian Civil War

38 Political refugees may flee a country because they fear its leaders. Or they may fear persecution. Fidel Castro Dictator of Cuba

39 Persecution is unfair treatment of people because of who they are or what they believe.

40 These political push factors have one thing in common. They involve the way a government treats its citizens fairly. Cuban Soldiers

41 Many Cuban immigrants have come to the United States as political refugees.

42 Changes in the environment, such as a long-term drought, can push people to emigrate.

43 The most common push factors are economic. Most of the early immigrants to the U.S. were poor farmers or working people.

44 A powerful pull factor is the desire to unite divided families. Often young men are the first members of a family to immigrate to another country.

45 Once they find jobs and a place to live, they send for their wives, children, and parents.

46 Education is a strong pull factor in immigration. Many families migrate so that their children can attend good schools.

47 One of every 15 students in this country’s schools was born in another country. Older students come to attend colleges and universities.

48 Most people move hoping to improve the quality of their lives. In the U.S., this hope is called the “American Dream.”

Download ppt "Population. Do NOW! What are the world’s most populated regions?" 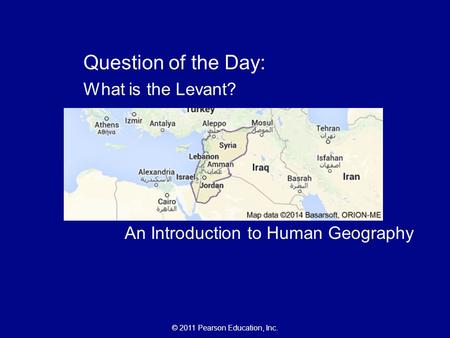 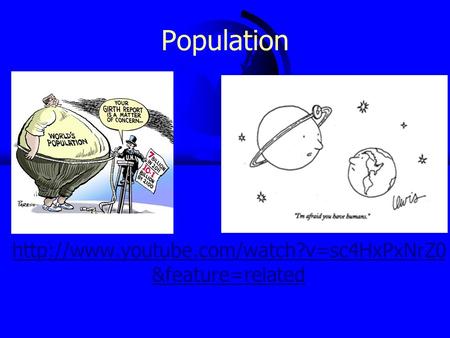 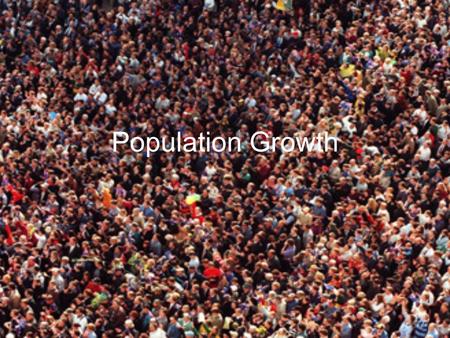 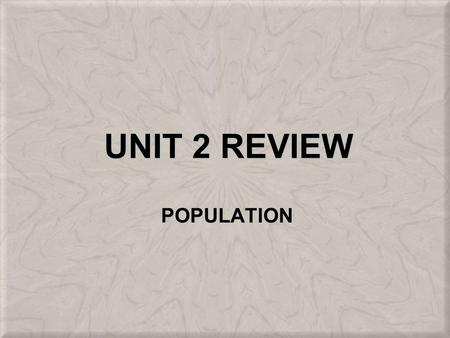