Presentation on theme: "Title the page Brainstart: Philosophy As you watch the following clip, think about the word “philosophy”. After watching,"— Presentation transcript:

1 Title the page Brainstart: Philosophy As you watch the following clip, think about the word “philosophy”. http://www.tubechop.com/watch/809067 After watching, answer these questions in your notebook: –What does the word “philosophy” mean? –What is the point of having a philosophy? Why is it important?

2 Draw a line under your Brainstart

3 Background Info “philosophy” comes from Greek roots: philo = love and sophia = wisdom The study of truths or principles A system of beliefs to guide everyday life

5 Divide the whole page into 4 boxes Label the boxes like this: Philosophy in ChinaConfucianism DaoismLegalism

7 Confucianism Founder: Kongfuzi, also called Confucius Goal: Just and peaceful society Belief: –Society is based on relationships. –When people act properly in their relationships, society thrives –Respect and obey those above you, set good example for those below you –Wisdom in word and action is more important than wealth

8 Daoism Founder: Laozi, a Zhou court advisor Goal: Create harmony by finding natural balance Belief: –The Dao, or “Way” is a force that gives order to the universe –Nature is full of opposites, represented by yin and yang (i.e. light & dark, life & death) –Avoid feeling self-important or trying to achieve wealth and fame—it is not natural –Laws and rules prevent natural harmony, so a ruler should rule as little as possible

10 Activity In a group of three, each group member will be given a primary source passage related to one of the three Chinese philosophies You will be given a few minutes to read and annotate your passage As you read, look for evidence to support your hypothesis about which philosophy is represented in your passage When the teacher calls time, rotate the passages to the left in your group without talking. Read the new passage and look at the annotations made by previous readers, then add your own annotations. After you have read all three passages, discuss your ideas about which passage represents which philosophy. Complete the graphic organizer as a group.

12 Exit Slip Think about it…How would each philosophy affect the way a ruler ran his/her state? Respond: Imagine that the school is adopting one of the three Chinese philosophies and using it to run the school. –Which philosophy would be best for running a successful school? Why? –What are some specific examples of what someone would experience in a school under this philosophy? Paint a picture with words describing what someone would see/hear, how they would act/interact, etc.

Download ppt "Title the page Brainstart: Philosophy As you watch the following clip, think about the word “philosophy”. After watching," 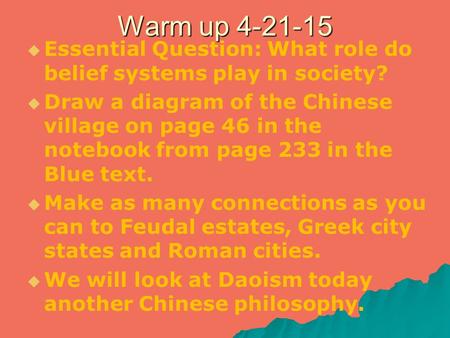 Warm up   Essential Question: What role do belief systems play in society?   Draw a diagram of the Chinese village on page 46 in the notebook.