Presentation on theme: "Chapter 4 Arrangement of Electrons in Atoms. Starter Look at the colors on a computer screen. What do you notice? Close inspection reveals that they are."— Presentation transcript:

2 Starter Look at the colors on a computer screen. What do you notice? Close inspection reveals that they are actually made of separate colored dots that our eyes perceive as one color. The study of electrons demonstrates that electromagnetic energy comes in bundles divisible by a quantity called Planck’s constant. Planck’s constant is so small, however, that electromagnetic energy seems to vary continuously, just like the colors on a computer screen.

3 Objectives Explain the mathematical relationship among the speed, wavelength, and frequency of electromagnetic radiation Discuss the dual wave-particle nature oflight. Discuss the significance of the photoelectric effect and the line-emission spectrum of hydrogen to the development of the atomic model

4 The Development of a new Atomic Model The Rutherford model of the atom was an improvement over previous models, but was incomplete Did not explain where the atom’s negatively charged electrons are located in the space surrounding its positively charged nucleus What prevented the negative electrons from being drawn into the positive nucleus?

5 The Development of a new Atomic Model In the early 20 th century, a new atomic model evolved as a result of investigation into the absorption and emission of light by matter. The studies revealed an intimate relationship between light and an atom’s electrons. This new understanding led directly to a revolutionary view of the nature of energy, matter, and atomic structure.

9 The Wave Description of Light

16 The photoelectric effect: electromagnetic radiation strikes the surface of the metal, ejecting electrons from the metal and creating an electric current

17 quantum quantum: the minimum quantity of energy that can be lost or gained by an atom Planck’s constant: an object emits energy in small, specific amounts h = 6.626 x 10^-34 Js

19 Hydrogen-Atom Line-Emission Spectrum When current is passed through a gas at low pressure, the potential energy of some of the gas atoms increases ground state: lowest energy state of an electron excited state: higher potential energy than ground state When an excited atom returns to its ground state, it gives off the energy it gained in the form of electromagnetic radiation

21 Hydrogen-Atom Line-Emission Spectrum line-emission spectrum: a narrow beam of the emitted light was shined through a prism, it was separated into a series of specific frquencies

22 Hydrogen-Atom Line-Emission Spectrum It was expected that hydrogen would give off a continuous spectrum, but it only gave off specific frequencies of light? Whenever an excited atom falls back from an excited state to its ground, it emits a photon The photon’s energy is = difference in energy between the atom’s initial and final state You can find the wavelengths and then determine the amount of energy

23 Bohr Model of the Hydrogen Atom Linked the atom’s electron with photon emission When an electron is in orbit, it has fixed energy The closer you are to the nucleus, the less energy Farther from nucleus = more energy

24 When electrons absorb energy, they get excited and move up a level, eventually they release gained energy (_______) and move back down level to rest

Download ppt "Chapter 4 Arrangement of Electrons in Atoms. Starter Look at the colors on a computer screen. What do you notice? Close inspection reveals that they are." 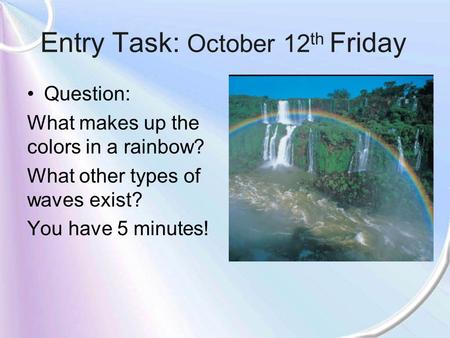