2 Techniques for Studying the Brain

4 EEG Functional Methods
EEG (electroencephalogram) is an amplified recording of the electrical activity (“brain waves”) sweeping across the brain’s surface, measured by electrodes placed on the scalp (sleep studies, etc.)

5 PET Scan Functional Methods
PET (positron emission tomography) Scan is a visual display of brain activity that detects the consumption of radioactive glucose (metabolic activity) while the brain performs a given task. By doing this, one can connect brain activity to the area of the brain that controls it.

7 Combination Method (structure & function)
fMRI An fMRI (functional MRI) is a comparison of blood flow before and during the performance of mental functions to map the parts of the brain that control those functions. It sort of combines elements of the MRI (structure) and PET (function – oxygen consumption). The fMRI image shows brain regions that are active when a participants lies.

9 Areas & Parts of the Brain

11 Parts of the Brain Stem:
The Medulla is the base of the brainstem that controls heartbeat and breathing. Pons deals with facial expressions. Also plays a role in sleep & dreaming. Reticular Formation (RAS) is a nerve network in the brainstem that plays an important role in controlling arousal. Pons

15 It includes the hippocampus, amygdala, and hypothalamus.
The Limbic System The Limbic System is a doughnut-shaped system of neural structures at the border of the brainstem and cerebrum, associated with emotions such as fear, aggression and drives for food and sex. It includes the hippocampus, amygdala, and hypothalamus. OBJECTIVE 13| Describe the structures and functions of the limbic system, and explain how one of these structures controls the pituitary gland.

18 The Hypothalamus lies below (hypo) the thalamus.
It directs several maintenance activities like eating, drinking, body temperature, and control of sexual arousal. It also helps control the endocrine system by giving directions to the pituitary gland. Pituitary

19 The Limbic System contains many Reward/Pleasure Centers
Olds and Milner (1954) discovered that Rats cross an electrified grid for self-stimulation when electrodes are placed in the reward (hypothalamus) center. When the limbic system is manipulated, a rat will navigate fields or climb up a tree (bottom picture). It is possible that some addictive behavior may be related to a genetic disorder (reward deficiency syndrome).

20 Cerebral Cortex The intricate fabric of interconnected neural cells that covers the cerebral hemispheres. It is the body’s ultimate control and information processing center. OBJECTIVE 14| Define cerebral cortex and explain its importance fro the human brain.

21 Structure of the Cerebral Cortex
Each brain hemisphere is divided into four lobes that are separated by prominent fissures. These lobes are the: a. frontal lobe – judgement/reasoning b. parietal lobe – senses c. occipital lobe – vision d. temporal lobe – hearing A. B. C. D. OBJECTIVE 15| Identify the four lobes of the cerebral cortex.

22 Functions of the Cerebral Cortex
The Motor Cortex is the area at the rear of the frontal lobes that controls voluntary movements. The Sensory Cortex is the area at the front of the parietal lobes that receives information from skin surface and sense organs. OBJECTIVE 16| Summarize some of the findings on the functions of the motor cortex and the sensory cortex, and discuss the importance of the association areas.

25 Functions of the Cerebral Cortex
The auditory cortex is located in the temporal lobe of the brain.

29 The Brain The Divided Brain

30 Lateralization (Specialization)
Our brain is divided into two hemispheres. The Left Hemisphere Processes logical tasks/analytical (reading, writing, speaking, mathematics, and comprehension skills) Controls the right side of our body In the 1960s, it was termed as the dominant brain. The Right Hemisphere Processes non-verbal tasks/perceptual (spatial relationships, musical/artistic ability and mental imagery) Controls the left side of our body May also be related to some negative emotions The Corpus Callosum is a wide band of axon fibers that connects the two hemispheres and allow them to communicate. OBJECTIVE 19| Describe split-brain research, and explain how it helps us to understand the functions of our left and right hemispheres.

31 Language Aphasia is an impairment of language, usually caused by left hemisphere damage either to Broca’s area (impaired speaking) or to Wernicke’s area (impaired understanding). OBJECTIVE 17| Describe the five brain areas that would be involved if you read this sentence aloud.

33 Corpus Callosotomy – Splitting the Brain
A procedure in which the two hemispheres of the brain are isolated by cutting the connecting fibers (mainly those of the corpus callosum) between them. Usually done to prevent uncontrollable seizures in patients with severe epilepsy. Corpus Callosum Mark Gazzaniga

35 Divided Consciousness
Can I have two volunteers (one needs to have laced shoes)? SO - which creates an artificial visual field

36 The Brain’s Plasticity
The brain is sculpted by our genes but also by our experiences. Plasticity refers to the brain’s ability to modify or reorganize itself after some type of injury or illness. Usually the brain areas that are related to the damaged/missing part develop the ability to function as a part of the new system. For example, in blind people the visual cortex may register and process touch and/or hearing also (heightening those senses) Our brains demonstrate more plasticity when we are children. OBJECTIVE 18| Discuss brain’s plasticity following injury or illness. 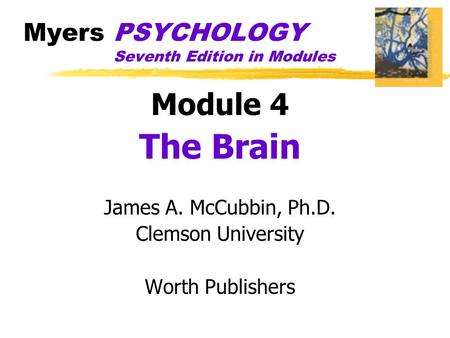