3 Conditions for Comparing 2 Means
SRS Two SRS’s from two distinct populations Measure same variable from both populations Normality Both populations are Normally distributed In practice, (large sample sizes for CLT to apply) similar shapes with no strong outliers Independence Samples are independent of each other Ni ≥ 10ni

5 2-Sample z Statistic Since we almost never know the population standard deviation (or for sure that the populations are normal), we very rarely use this in practice.

10 Two-sample, independent, T-Test on TI
If you have raw data: enter data in L1 and L2 Press STAT, TESTS, select 2-SampT-Test raw data: List1 set to L1, List2 set to L2 and freq to 1 summary data: enter as before Set Pooled to NO copy off t* value and the degrees of freedom Confidence Intervals follow hypothesis test steps, except select 2-SampTInt and input confidence level

12 Example 1 Does increasing the amount of calcium in our diet reduce blood pressure? Subjects in the experiment were 21 healthy black men. A randomly chosen group of 10 received a calcium supplement for 12 weeks. The control group of 11 men received a placebo pill that looked identical. The response variable is the decrease in systolic (top #) blood pressure for a subject after 12 weeks, in millimeters of mercury. An increase appears as a negative response. Data summarized below Calculate the summary statistics. Test the claim Subjects 1 2 3 4 5 6 7 8 9 10 11 Calcium -4 18 17 -3 -5 -2 ---- Control -1 12 -11

15 Example 1b cont Conditions: SRS Normality Independence
The 21 subjects were not a random selection from all healthy black men. Hard to generalize to that population any findings. Random assignment of subjects to treatments should ensure differences due to treatments only. Sample size too small for CLT to apply; Plots Ok. Because of the randomization, the groups can be treated as two independent samples

18 Example 2a Cont Parameters Hypothesis H0: H1:
Requirements: SRS: Normality: Independence: ui is average cell phone cost for provider i μ1 = μ2 (No difference in average costs) μ1 > μ2 (Provider 1 costs more than Provider 2) Stated in the problem Have to assume to work the problem. Sample size to small for CLT to apply Stated in the problem

22 Pooling Standard Deviations??
DON’T Pooling assumes that the standard deviations of the two populations are equal – very hard to justify this This could be tested using the F-statistic (a non robust procedure beyond AP Stats) Beware: formula on AP Stat equation set under Descriptive Statistics

23 Summary and Homework Summary Homework
Two sets of data are independent when observations in one have no affect on observations in the other Differences of the two means usually use a Student’s t-test of mean differences The overall process, other than the formula for the standard error, are the general hypothesis test and confidence intervals process Homework 13.1, 7, 8, 13, 17 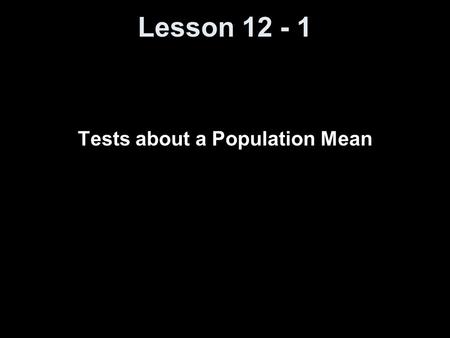 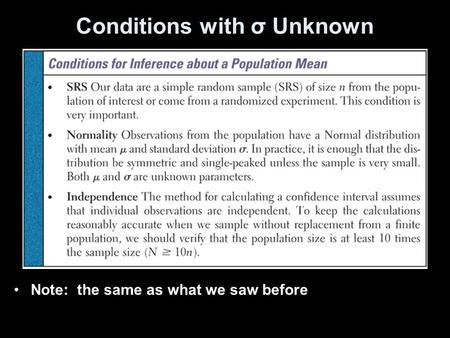 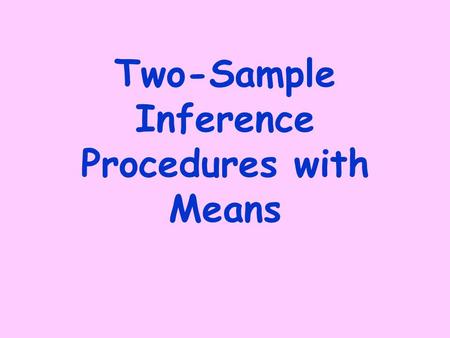 Two-Sample Inference Procedures with Means. Remember: We will be intereste d in the differen ce of means, so we will use this to find standard error. 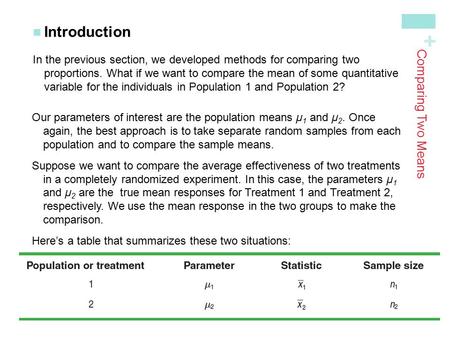 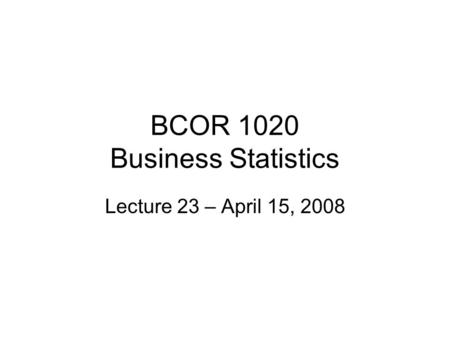 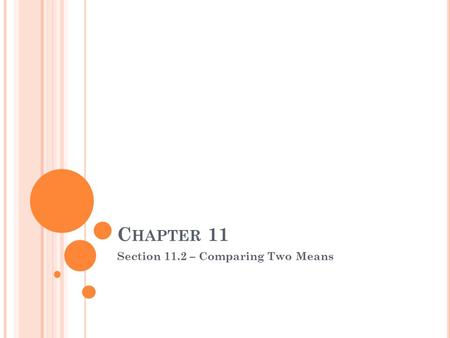 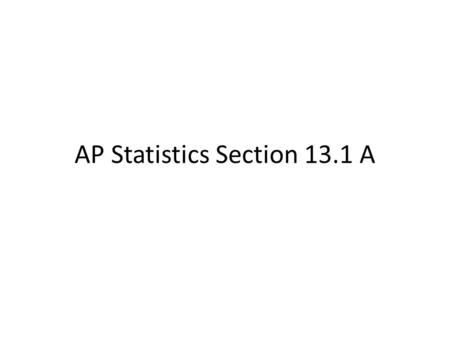 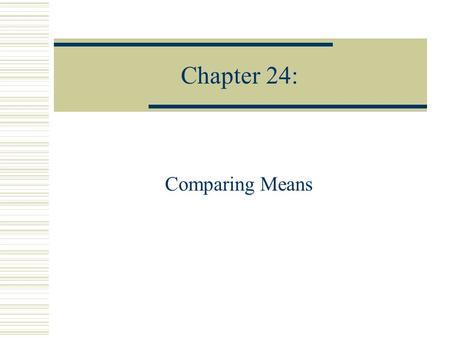 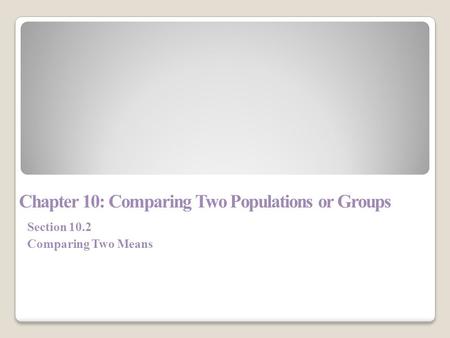 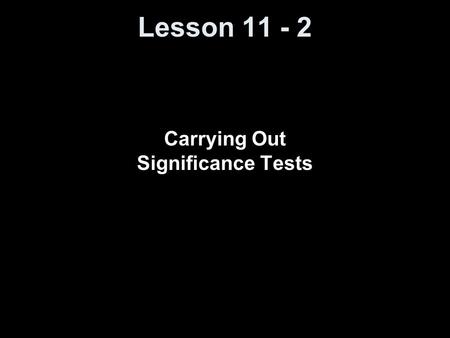 Lesson Carrying Out Significance Tests. Vocabulary Hypothesis – a statement or claim regarding a characteristic of one or more populations Hypothesis. 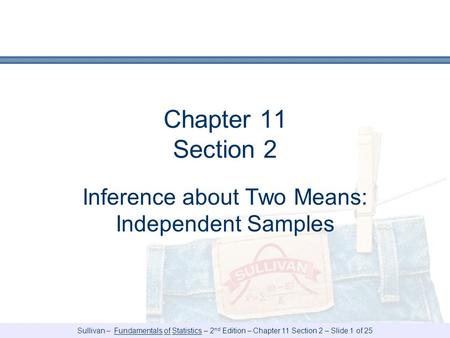 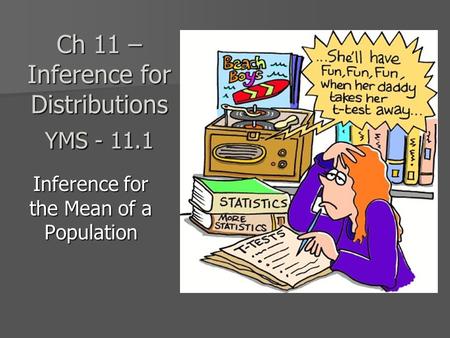 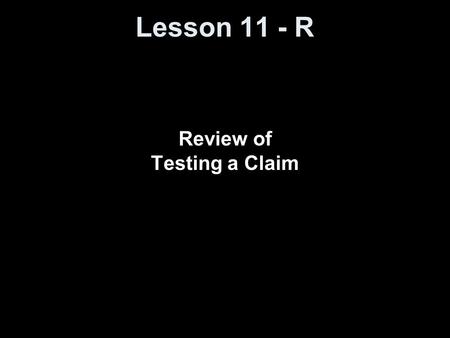 Lesson 11 - R Review of Testing a Claim. Objectives Explain the logic of significance testing. List and explain the differences between a null hypothesis. 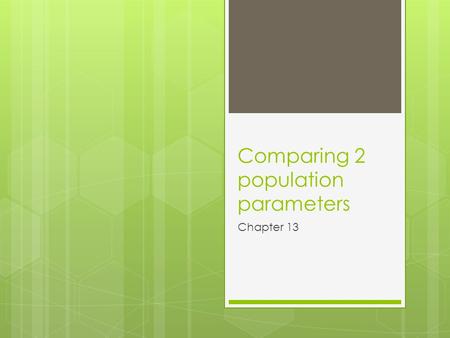 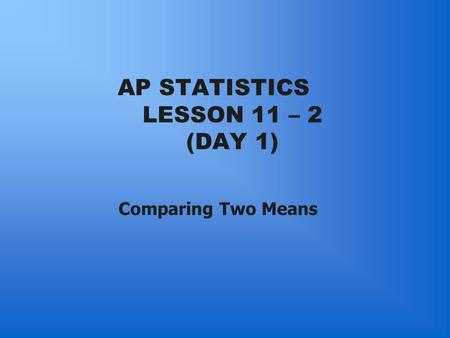