2 Reconstruction- questions
There were three main questions that needed to be answered during the Reconstruction – the period after the Civil War ended (1865) to 1877. How will the seven southern states rejoin the Union? How will the southern economy be rebuilt? What rights will African Americans have?

4 Radical Republicans Portion of the Republican Party who wanted the following: To punish and destroy the political power of southern slaveholders; Immediate citizenship and voting rights for African Americans; A powerful federal gov. to bring about the changes (quickly)

5 Moderate Republicans A member of the Republican Party who wanted the following: Rebuild the nation without punishing the South too much; Gradually give African-Americans citizenship and right to vote; A powerful federal gov. to bring these changes (gradually)

6 Democrats Generally individuals from southern states who wanted the following: A weak federal gov. with an emphasis on states’ rights; The issue of citizenship and voting rights for African-Americans to be decided by individual states.

7 Abraham Lincoln President at the beginning of Reconstruction
Moderate Republican Wanted to see the Union re-unified as quickly and easily as possible.

11 14th amendment Adopted in 1868;
Makes all persons born or naturalized in the U.S. (including former slaves) citizens of the U.S.; Equal protection under the law.

12 15th amendment Adopted in 1870;
Prohibits the denial of voting rights to people on the basis of race, color, or previous servitude

16 Johnson’s Plan Supported by Andrew Johnson and other Democrats;
Ratify the 13th amendment; Promised restoration of land to anyone who swore a loyalty oath; Except wealthy planters– they had to write to him specifically African-American rights were not necessary

18 So Congress passed… Civil Rights Act of 1866= federal guarantee of civil rights, superseding any state laws that limited them. Johnson tried to veto it, but it did not work. It was the first time in history Congress got the necessary 2/3 vote to overturn a president’s veto.

19 And it continued… Military Reconstruction Act of 1867= divided remaining states into 5 military districts, each governed by a Union general. States also had to write a new constitution that guaranteed the right to vote for African-Americans.

20 But what about the economy?
Sharecropping= landowner dictates the crop, and provides sharecropper with housing and supplies in return for a ‘share’ of the crop’s price at market. Share-tenancy= differed in that the worker could choose the crop and had to purchase own supplies. Tenant-farming= most independent form; pay rent to landowner, but could manage crop as they pleased.

23 Response to the Reconstruction Act of 1877
In 1867, Johnson attempted to remove Edwin Stanton from his Secretary of War position while the Senate was not in session. Congress had passed the Tenure of Office Act to prevent him from doing so. When he did, Johnson became the first president to be impeached, or accused of wrongdoing.

24 Grant’s presidency and Reconstruction
Civil War hero whose presidency was marred by scandal and corruption within his administration. Had preached to “let no guilty man go free” but could not see what was in front of him.

25 Southern whites gain power
A group of southern whites known as Redeemers attempted to regain power for the South in Congress by uniting poor, moderate Republicans and Democrats. Slowly, the power of the southern states grew.

26 The Election of 1876 1876 election;
Both candidates appealed to the dislike for corruption; Tilden carried the South, but votes in 3 states were disputed (SC, LA and FL) What solution to this problem would Congressional representatives and Supreme Court justices come up with?

27 Compromise of 1877 The political compromise that gave Republican Rutherford B. Hayes the presidency in exchange for the withdrawal of all federal troops from the Southern states. This agreement ended Reconstruction. 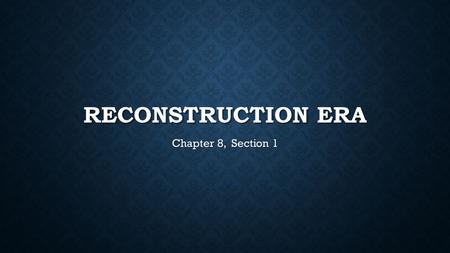 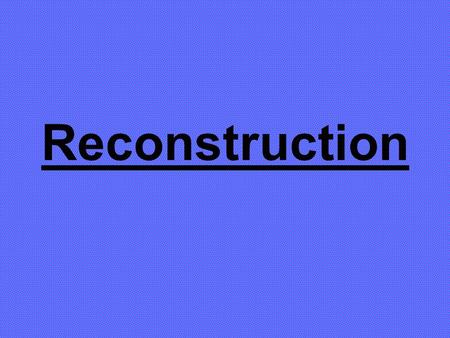