2 In September 2004, the EC proposed the new instruments for EU external aid in 2007-13. Among those instruments, there is IPA the instrument for pre-accession. It is clear that one component of the new approach for CBC at EU borders with CC/PCC is: Reduce complexity Solution: Structural Funds rules for CBC at EU internal borders to apply also at EU external borders with CC/PCC Adaptations to specific conditions of CBC with third countries to be kept to a very minimum Which is the state of the art of the IPA regulations? Which will be the specific rules related to the financial flows of the new instrument?(they will follow the ERDF rules or the PRAG rules?) Which Commission service will be responsabile for the IPA instrument? It seems already sure that will be the DG Regional Policy. How will be the relation with the DG Enlargement and DG Relex?

3 As far as geographical eligibility is concerned, eligibile regions will be: NUTS III regions (or equivalent) along land and maritime (regions separated by max 150 km) borders between Member States and adjacent Candidate Countries/potential CC

4 the IPA Adriatic will be a CBC maritime programme limited to NUTS III regions of the eastern Adriatic countries this would reduce the possibilities for participation at the coastal area of Croatia, Montenegro, Albania and a very small coast line for Bosnia & Herzegovina. Montenegro is – after the referendum – independent from Serbia. Apparently it is now excluded by this programme Bosnia & Herzegovina is almost completely excluded. Furthermore it is not included in other CBC programmes It seems not to be yet established the NUTS III regions (or equivalent) at least as concern Albania and Bosnia & Herzegovina Are there some news on this matter?

5 Maritime borders: regions along the MS–CC/PCC borders separated by max 150 km. The Adriatic cross border cooperation is an IPA maritime cooperation programme Italy is included in only one programme being all its coastal area (except for Molise region included in order to give continuity to the admissible area) separated by max 150 km from the coastal countries of Eastern Adriatic Slovenia and Greece: they was originally excluded by the programme even if they are part of the Adriatic basin due to the fact they are involved in CBC IPA with neighbourhood Balkans via land and because they are separated from Bosnia & Herzegovina (Slovenia) and Montenegro (Greece) by more than 150 km. They do not seem to present the criteria for the eligibility

7 Slovenia has presented a formal request to participate in the Adriatic CBC IPA programme being included in the Adriatic basin and it has also assured ERDF funds as co financing rate… Which is the Commission position on this matter? And if the EC position agree with the Slovenian request, what will happen with the Greece?

8 If Slovenia and Greece are included, we will have a programme composed by 3 MS and 4 countries (IPA) on a unique maritime basin Which will be the difference between this CBC maritime programme and a multilateral basin programme (moreover not scheduled by the regulation on IPA dated September 2004) Which will be the relations between this programme and the ENPI programme? (in addition, in ENPI the majority of the Italian regions and Slovenia are excluded)

10 In different situations EC has mentioned the South Eastern European Space programme – transnational cooperation – as the ideal space for cooperation among not cross border areas of the Adriatic Danubian space The SEES programme is not an IPA programme so it is not automatic the link between ERDF and IPA funds There are negotiations on this matter due to the fact the Eastern Adriatic Countries have to decide how many funds to allocate Any news on this matter? 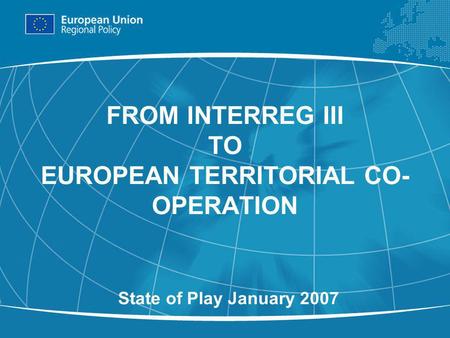 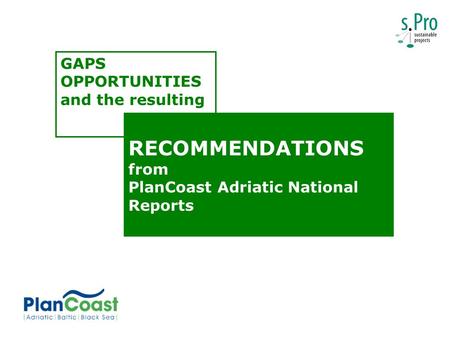 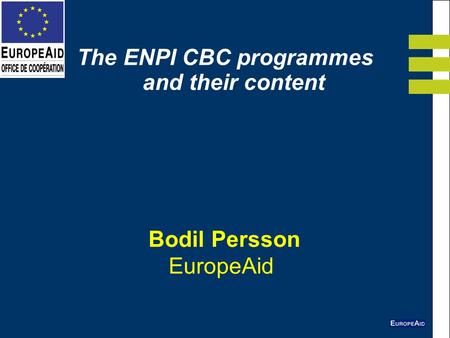 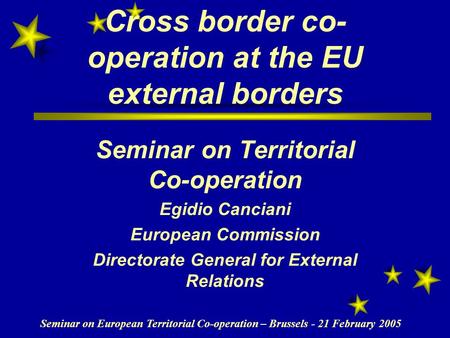 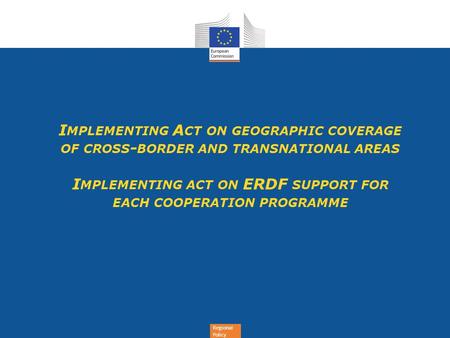 Regional Policy I MPLEMENTING A CT ON GEOGRAPHIC COVERAGE OF CROSS - BORDER AND TRANSNATIONAL AREAS I MPLEMENTING ACT ON ERDF SUPPORT FOR EACH COOPERATION. 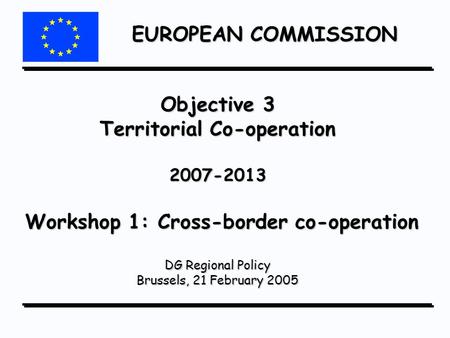 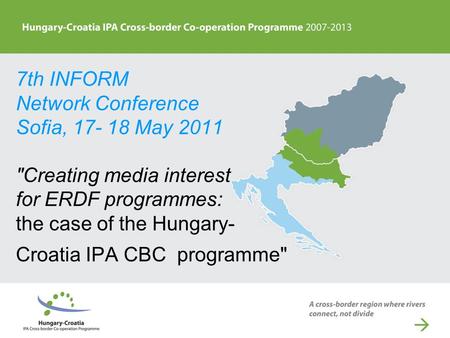 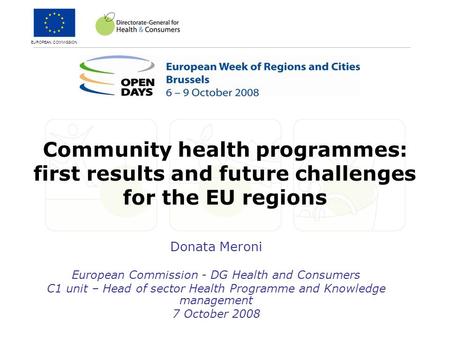 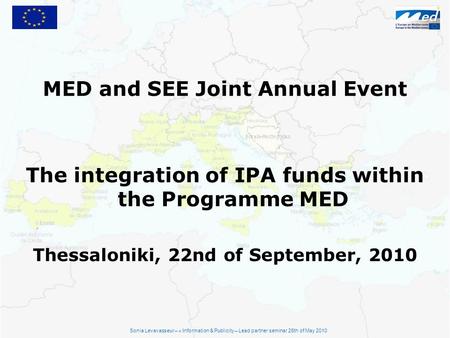 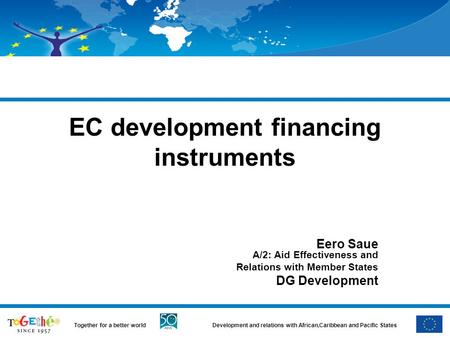 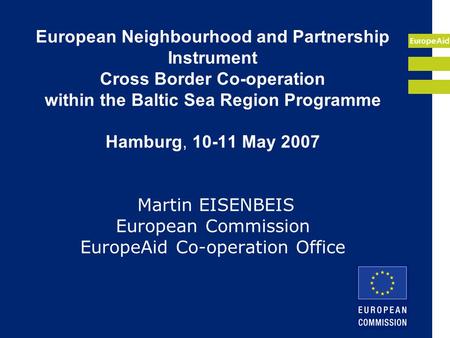 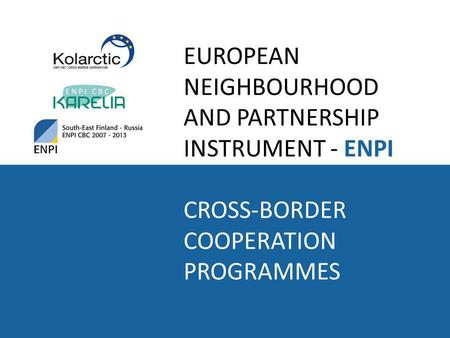 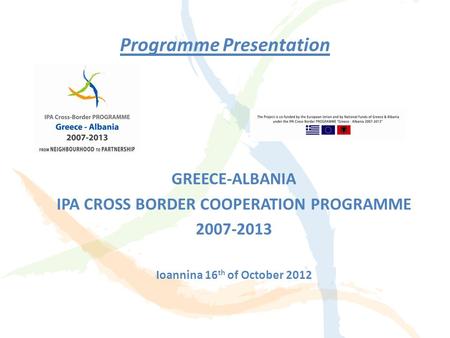 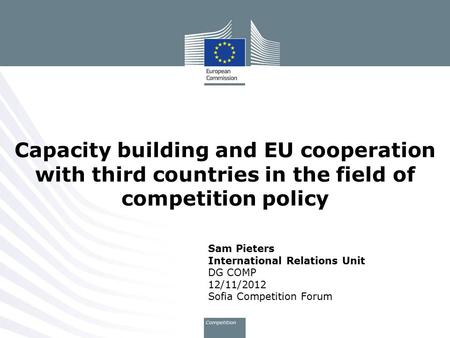 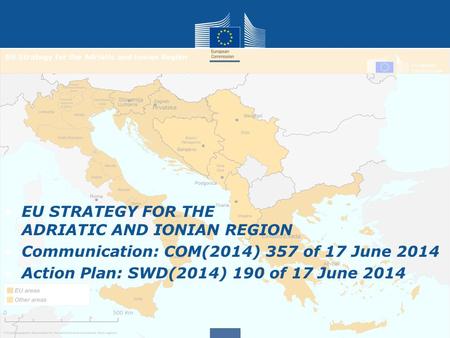 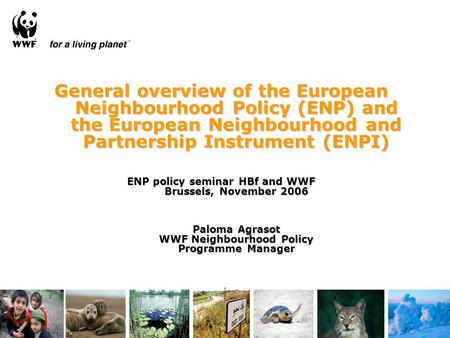 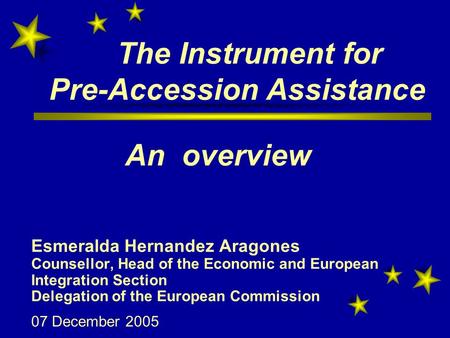