© Boardworks Ltd 2004 1 of 15 What was Détente? The Cold War For more detailed instructions, see the Getting Started presentation. This icon indicates.

Presentation on theme: "© Boardworks Ltd 2004 1 of 15 What was Détente? The Cold War For more detailed instructions, see the Getting Started presentation. This icon indicates."— Presentation transcript:

1 © Boardworks Ltd 2004 1 of 15 What was Détente? The Cold War For more detailed instructions, see the Getting Started presentation. This icon indicates the slide contains activities created in Flash. These activities are not editable.

4 © Boardworks Ltd 2004 4 of 15 Why were both Superpowers keen on détente? Détente means a ‘lessening of tensions’. There are a number of reasons why both superpowers were keen on détente… Money Nuclear war Proliferation Public opposition China Vietnam How do you think each of these aspects were important?

5 © Boardworks Ltd 2004 5 of 15 The Cuban Missile Crisis had frightened both superpowers. They realised how close the world had come to nuclear war. Improved relations would reduce the chance of nuclear conflict – and destruction of the world. The Arms Race was incredibly expensive. Both countries, but especially the USSR, were keen to reduce spending. Money ProliferationChina Nuclear warPublic oppositionVietnam

6 © Boardworks Ltd 2004 6 of 15 As more and more people became aware of the terrible impact nuclear war would have, public opposition grew against nuclear weapons. Détente could lead to a commitment to reduce weapons. The superpowers were concerned about nuclear proliferation – weapons and technologies spreading to other countries. This would increase the chance of nuclear conflict. Money ProliferationChina Nuclear warPublic oppositionVietnam

7 © Boardworks Ltd 2004 7 of 15 The USA was keen to withdraw from Vietnam, and détente would allow for a change in relations. It would be a chance to negotiate a withdrawal. China and the USSR fell out in 1960. The USA were keen for détente to keep the USSR and China apart. The USSR was concerned about the USA and China combining against them! Détente meant friendly relations between the USSR and USA. Money ProliferationChina Nuclear warPublic oppositionVietnam

8 © Boardworks Ltd 2004 8 of 15 The missile race Number of missiles Think when the Cuban Missile Crisis was. What does this graph suggest about the impact of the crisis?

9 © Boardworks Ltd 2004 9 of 15 The reality of détente Détente occurred because it was in the interests of both superpowers. It is possible to debate how great an impact it really had. Between 1968 and 1979, however, there were a series of events and agreements that did improve relations. Click on the arrows to move through the timeline.

10 © Boardworks Ltd 2004 10 of 15 SALT I treaty SALT = Strategic Arms Limitation Talks, signed in 1972. Why was reduction of arms sought? Nixon hoped that arms limitation talks would persuade the Soviets to stop supporting North Vietnam. In 1971 Brezhnev announced a ‘Programme for Peace’ to improve relations between the Superpowers. Nixon tried to improve US–Chinese relations. In 1972, the US government finally agreed to let China join the UN. This worried the Soviets, who thought the two countries might gang up on the USSR, so Brezhnev invited Nixon to Moscow to sign SALT I. SALT I only covered some types of nuclear weapons – the Arms Race could easily continue. Think about the reasons for SALT – what does this suggest about the entire détente process?

11 © Boardworks Ltd 2004 11 of 15 Weapons increases after SALT I Number of missiles What does this graph tell you about the success of SALT I? Explain your answer.

12 © Boardworks Ltd 2004 12 of 15 SALT II treaty From 1977, talks for a new SALT agreement took place. The aim was to limit every type of rocket and warhead. It was meant to stay in force until 1985, and limited each superpower to 2,400 strategic nuclear weapon systems. The treaty was drawn up in 1979, but the USSR then invaded Afghanistan, so the USA refused to ratify the treaty. Although it was never ratified, both sides pledged to follow its guidelines. However, it did not mention tactical (short-range) weapons or designate how many strategic warheads each side could deploy. How should SALT 2 be assessed? Was it a total failure? Explain your viewpoint in a paragraph.

13 © Boardworks Ltd 2004 13 of 15 International cooperation Détente saw increased cooperation on an international level: International Geophysical Year, 1957–58 The Antarctic Treaty, 1959 The Outer Space Treaty, December 1966 Space Cooperation Scientists from 67 nations cooperated on projects to discover more about the world. Antarctica could only be used for peaceful purposes, and that national claims should not interfere with scientific research. Moon and all planets only to be used for peaceful purposes, and no country could lay claim to the Moon or any other celestial body. No weapons of mass destruction in space. Superpower ‘meeting’ in space in 1975, Soviet space station construction included US modules – launch of Mir (meaning ‘peace’) in 1986. Cooperation

14 © Boardworks Ltd 2004 14 of 15 The problems with détente With discussions about disarmament and increased cooperation, it is important to understand that détente stood for ‘improved relations’, not an end to the Cold War. Despite the SALT I treaty (1972), the Arms Race continued. Both sides continued to develop weapons ‘around’ the agreement. There was no end to war – in 1973 a Middle East war saw the USA supplying Israel and the USSR supplying Egypt and Syria Many agreements were not enforced – SALT treaty agreements were not checked and the human rights protection agreed at Helsinki was ignored by many (including the USSR). What do you think the real impact of détente was?

Download ppt "© Boardworks Ltd 2004 1 of 15 What was Détente? The Cold War For more detailed instructions, see the Getting Started presentation. This icon indicates." 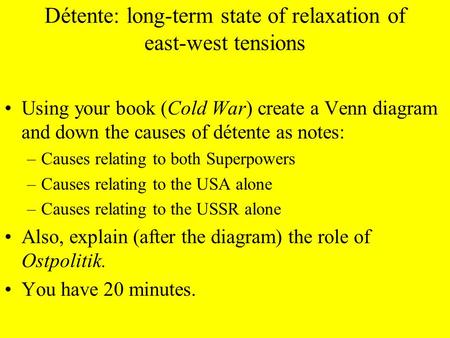 Détente: long-term state of relaxation of east-west tensions Using your book (Cold War) create a Venn diagram and down the causes of détente as notes: 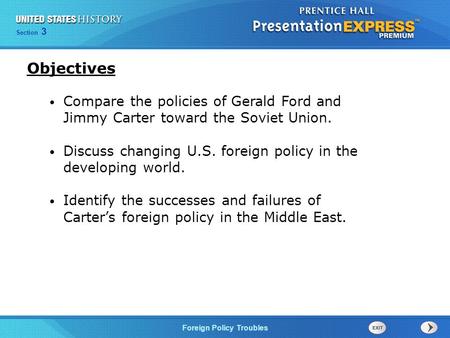 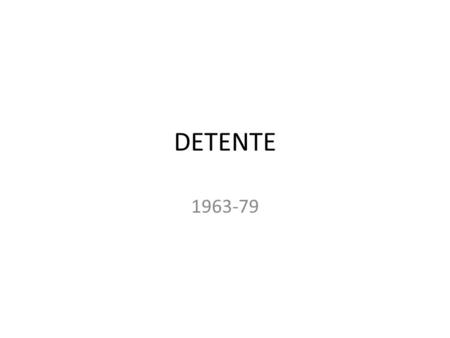 DETENTE By 1962, the two global superpowers were on the brink of nuclear war. This was a result of the years of suspicion since WW2 but in. 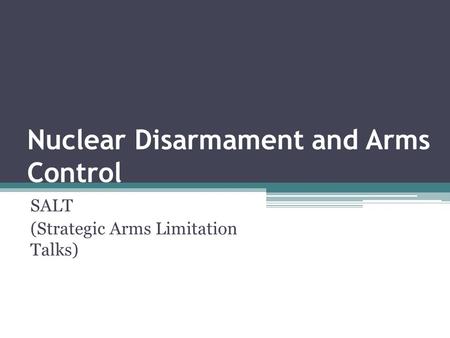 © Boardworks Ltd of 19 The Arms Race The Cold War For more detailed instructions, see the Getting Started presentation. This icon indicates the.

© Boardworks Ltd of 14 NATO and the Warsaw Pact The Cold War For more detailed instructions, see the Getting Started presentation. This icon indicates.

© Boardworks Ltd of 17 The Origins of the Cold War The Cold War This icon indicates that detailed teacher’s notes are available in the Notes Page. 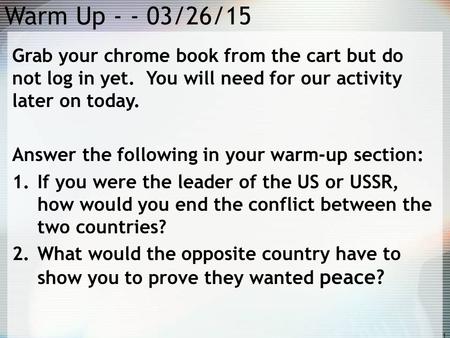 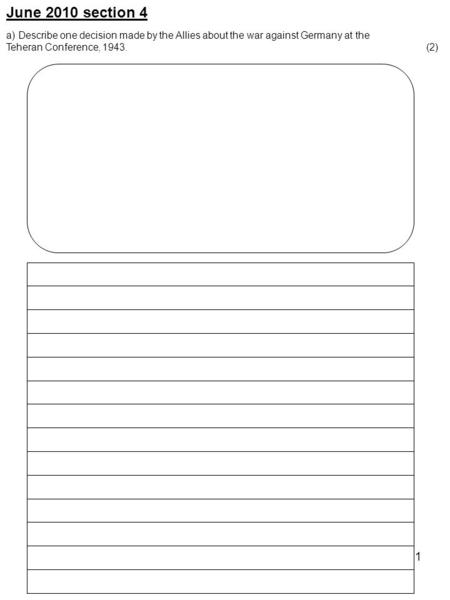 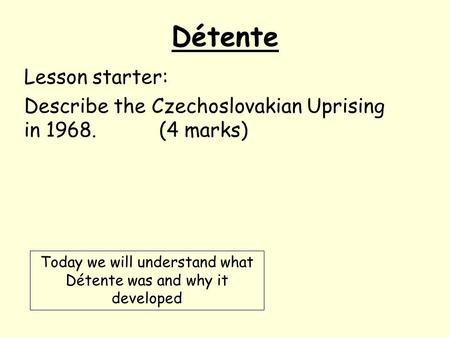 Détente Lesson starter: Describe the Czechoslovakian Uprising in 1968.(4 marks) Today we will understand what Détente was and why it developed. 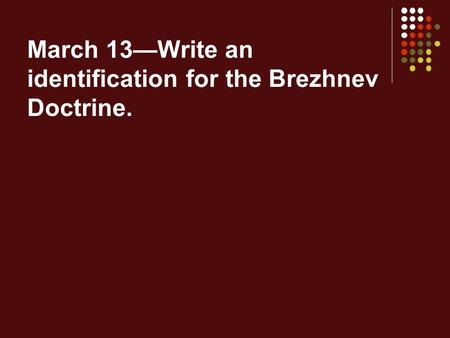 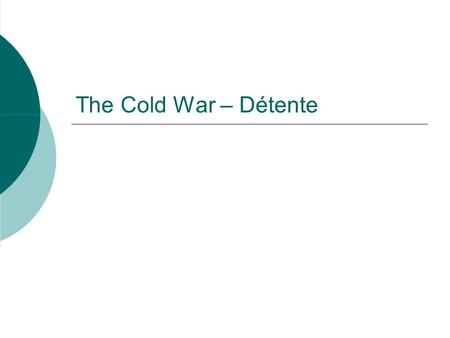 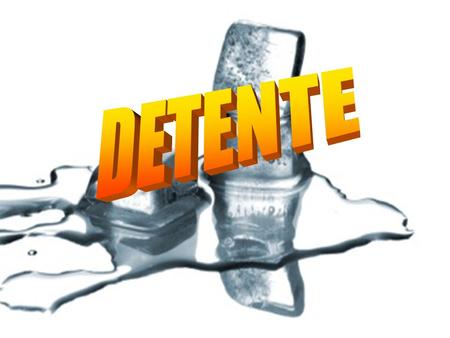 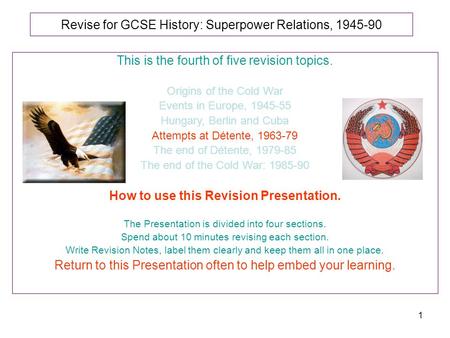 1 Revise for GCSE History: Superpower Relations, This is the fourth of five revision topics. Origins of the Cold War Events in Europe, 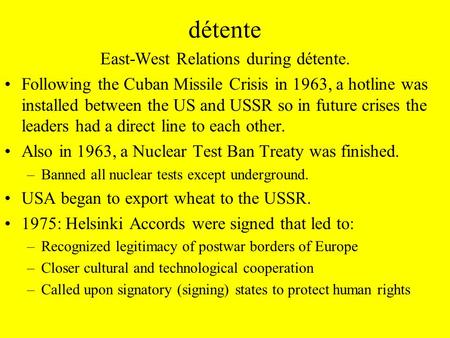 Détente East-West Relations during détente. Following the Cuban Missile Crisis in 1963, a hotline was installed between the US and USSR so in future crises.

Detente- Success or Failure? British cartoon, published How sincere does the artist think the two sides were in wanting to improve relations?